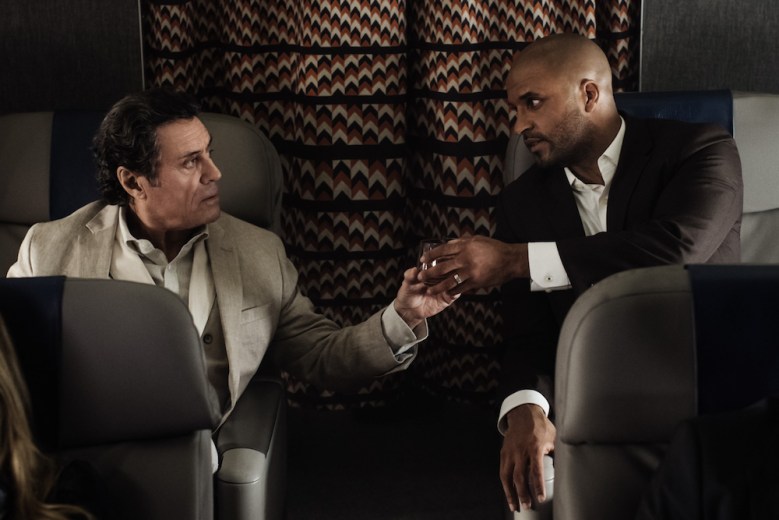 “American Gods” might be one of the most exciting series launching this spring. Adapted by Bryan Fuller and Michael Green from Neil Gaiman’s novel, the supernatural drama leans way into the weird for a highly imaginative tale about Shadow (Ricky Whittle), a former convict who finds himself drawn into a strange world of old gods and new by Mr. Wednesday (Ian McShane).

Whittle and McShane are just the tip of the iceberg when it comes to the cast accumulated for this show, representing some of today’s greatest talents — and Gaiman himself will not hesitate to sing their praises. In fact, when IndieWire got the chance to speak to the lauded author via phone, we took the opportunity to find out exactly what he thinks of his equally lauded cast.

For the record, our initial request was for just “a few words” to describe each cast member. But as you’ll see below, after one or two, Gaiman’s natural eloquence eventually took over. Shadow, a former convict, has a con man’s insight and a metric ton of grief he’s coping with at the beginning of the series. The audience’s entry point into the show, Shadow is the key to making this world make sense. As Shadow’s former cellmate, Low Key has some important advice for his one-time friend… and may be loaded with more secrets.

Gaiman: “So funny and so looking forward to doing more with him.”

Laura, as Shadow’s wife, begins her time in the series as an abstract object of adoration for her husband. But her story only grows more complicated.

Gaiman: “An intensity. I’m fascinated, continually, by the distance between Emily Browning and Laura. How can this wonderful, fragile, sweet, funny girl also be playing this astounding creature? But she manages it somehow.” A force of nature, Mad Sweeney brings with him magic as well as chaos.

Gaiman: “A glorious discovery – just perfect comic timing. Makes us want to write more and more stuff for Mad Sweeney. He’s so funny. I’ve written an entire 6,000 year history of Mad Sweeney – from the dawn of time in a prehistoric island. So they’ve got that and we can pull stories from there if we need to.” Slavic in origin, Zorya lives a humble life but takes no guff from anyone.

Gaiman: “I wish I’d met her. She’s one of the very few actors who I never met. And all of the stories I hear about her are absolutely hilarious and glorious. I remember seeing her as Frau Blücher in ‘Young Frankenstein’ and just loving that and being so excited.” The many forms Media appears in are as familiar as her motivations are illusive. The casting of Anderson, as a pop culture icon, is a brilliant touch.

Gaiman: “An astonishing actor. We forget how good she is because she plays characters who are a bit like her. And somebody that good — somebody that brilliant — it’s so amazing. Watching her channel Lucile Ball, David Bowie, Marilyn Monroe, or Judy Garland is just astounding. I think people will see sides to Gillian that they had never imagined.”

Embodying a legendary trickster god, Mr. Nancy’s aims are entirely his own.

Gaiman: “One of the funniest people I had ever been around. Sitting next to Orlando Jones when he goes off on a personal anecdote – there is nothing funnier than Orlando Jones telling his family history. It’s glorious. You just sit there with your face and your sides hurting from laughing and trying to catch your breath. I think all journeys, everywhere, you should have Orlando Jones sitting next to you, just talking.” The mysterious stranger who calls upon Shadow Moon’s help has no shortage of tricks up his sleeve. And it’s all owed to McShane’s performance.

Gaiman: “Having Ian McShane on our show feels like some kind of glorious honor. Because Ian has acted with everybody. Ian goes back to the sort of amazing theatrical tradition: Talking to him about John Gielgud, he’ll tell you about it, being in ‘Lovejoy’ with Gielgud. But I love the fact that there is so much charm and brilliance and technique and control, but you also feel that there’s a little bit of whimsy in there. That really is one of those places where Ian can go and find some of the places inside himself. If he had not been one of the greatest actors in the world, I fully believe that Ian McShane would’ve made a fantastic con man.”