The ladies celebrate marijuana's biggest day of the year. 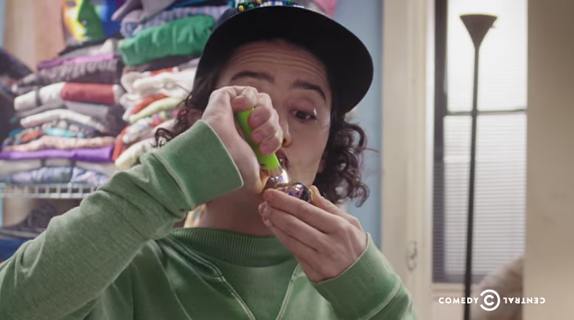 Season four of “Broad City” doesn’t premiere until August. But, luckily for fans of Abbi and Iliana, Comedy Central has released a brand-new short titled “Hack Into Broad City – Sharing a Bowl” as part of the show’s accompanying web series, “Hack Into Broad City.” In the video, the ladies smoke pot in celebration of 4/20, marijuana’s biggest day of the year, when at exactly 4:20 pm pot smokers around the country gather to smoke, and pot shops in legal weed states offer discounts to their customers.

The video features Abbi and Ilana chatting via webcam as they prepare to light up in honor of “the holidaze,” as Ilana puts it. Once they start smoking, the duo experiences a case of teleportation when Ilana’s pipe suddenly disappears and Abbi finds it in her room. “The girls toke up in honor of weed’s biggest day of the year — and accidentally stumble into the realm of the uncanny,” reads the description of the video. Check out the clip below.