The festival's gala screening of ESPN's "Mike and the Mad Dog" looked back at the famous talk show partnership that ended eight years ago, while the Q&A opened the door to a reunion. 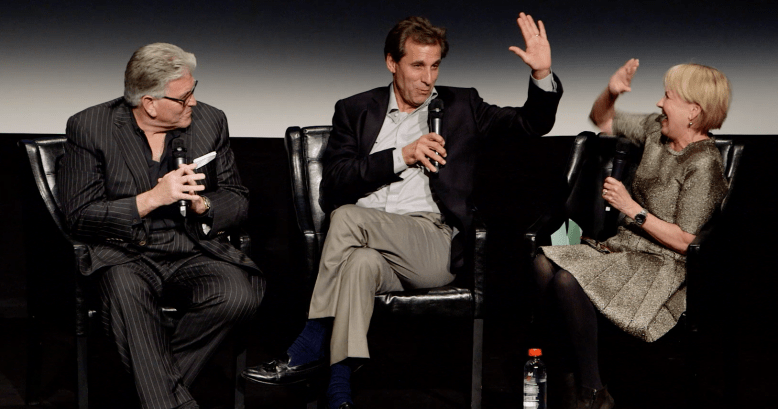 Mike Francesa, Chris Russo and Andrea Joyce on stage after the premiere of “Mike and the Mad Dog”

It was not the normal enthusiastic Tribeca Film Festival crowd at the BMCC Theater on Friday for the premiere of ESPN’s “Mike and the Mad Dog,” a new documentary about New York Sports Talk Show hosts Mike Francesa and Chris “Mad Dog” Russo, whose WFAN sports talk radio show reigned supreme for 19 years.

When producer and Tribeca executive vice president Paula Weinstein mispronounced Francesa’s name during her introduction, the crowd erupted like she had just fumbled an easy ground ball. When Weinstein jokingly responded that she was “a story-film person,” not a sports person, the crowd got even louder, and it became clear she was alone – everyone present was a sports fan there to see the legendary duo together again after having split up in 2008.

The documentary, which will premiere on ESPN in July, was an all-access look at how the daily five-and-a-half hour talk show radically changed the sports media landscape and New York sports itself. Many higher-ups from ESPN, a notorious rival of WFAN, admitted that “Mike and Mad Dog” shaped and heavily influenced what has now become ESPN’s massive Sports Radio network and that is simulcast on their cable channels.

The film also got inside the sometimes tumultuous relationship between Francesa and Russo. Forced together like an unwanted arranged marriage in 1989 — that both worked hard to exit — the two men quickly learned to get along when in just nine months on air they skyrocketed to the number one show in the radio-obsessed city and became a cash cow for the then-crumbling station.

One of the more remarkable apects of the film is how both Russo and Francesa took ownership of their individual roles in causing the rockiest times in the partnership. Francesa admitted he acted horribly in an incident stemming from a cancelled plane flight to a Knicks game, which triggered the co-hosts not talking to each other off the air – even during commercial break they would sit silently next to each other — in a feud that lasted months and was only ended when Francesa’s wife Roe invited Russo to their wedding.

For his part, Russo expressed regret over how he left WFAN after having lied to Francesa by denying the rumors that he was negotiating a massive deal with Sirius Radio to get his own radio station. “MIke and the Mad Dog”

The main attraction of the night was Francesa and Russo’s 25-minute post-screening Q&A with NBC sportscaster Andrea Joyce. Neither subject had seen the film before last night and were clearly moved by what they saw, in particular the section about Russo’s deceased father Tony, who was a regular part of the show and close with Francesa.

For close to a half hour it was “The Mike and the Dog” show all over again, as the former co-hosts easily slipped into their old infectious routine, while audience members would introduce themselves like on-air callers: “Hi, I’m Greg from Huntington, first time, long time.”

At the end of the Q&A, Francesa confirmed recent news he would definitely be leaving WFAN after 30 years when his contract expires on December 15.

Asked by Joyce if he could imagine doing “Mike and the Mad Dog” 2.0, Francesa gave a surprising and unequivical, “Yes,” to which Russo responded, “Wow, I have never heard him say that,” and gave Joyce a high five.

READ MORE: The 2017 IndieWire Tribeca Bible: Every Review, Interview and News Item Posted During the Festival

The conversation ended by both radio hosts acknowledging that their respective solo acts will never be as good a radio show or reach the heights they did as partners.

“There’s combustible chemistry that we reach that I’ve never heard anywhere else ever,” said Francesa. “We have worked alone now for almost a decade, and we have had a lot of success alone, but the note that we could reach, the thing we could reach together isn’t [only the best] we can do, I think it’s the best that anybody has ever done in sports.”

Russo, who not only left the partnership, but left local New York sports to do a national show on Sirius, says he misses the passion and energy of the connection with fans.

“I could cure cancer, but I will never in my career be able to top the Mike and the Mad Dog years,” said Russo.

ESPN will air “Mike and the Mad Dog” this July.

This Article is related to: Film and tagged ESPN, ESPN films, Tribeca 2017