The very personal look inside the lives of two artists will bow at Tribeca later this month. 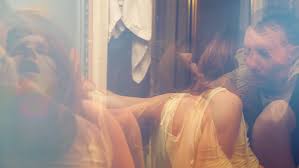 Filmed over the course of five — often wonderful, occasionally excruciating — years, Josephine Decker and Zefrey Throwell’s “Flames” chronicles the artist pair’s real-life falling in (and out of) love story. The film, set to bow at Tribeca later this month, blends reality and art, fact and fiction, the past and the present, all to tell a deeply intimate and very original story.

Decker, best known to cinephiles as the singular mind behind the double-whammy dramas “Butter on the Latch” and “Thou Wast Mild and Lovely,” and performance artist Throwell fell madly in love when they first met, kicking off a passionate romance punctuated by their own desires to document their budding relationship (hey, artists).

But a whirlwind vacation to the Maldives rocks their relationship to its core — or is the trip really to blame? — and when the pair decides to split, they must also decide what to do with their reams of lovestruck footage. That’s “Flames,” or at least half of it, as Decker and Throwell use the film to grapple with not only the fallout of their romance, but what the whole thing meant anyway (and how much of it was actually true).

“Flames” will have its world premiere at the Tribeca Film Festival on April 20. Check out both our exclusive red band (definitely NSFW) and green band trailers for “Flames” below.

This Article is related to: Film and tagged Flames, Josephine Decker, Trailers, Video