These twin Einstein timelines have plenty of intrigue, but a lot gets lost under the show's self-imposed weight of history. 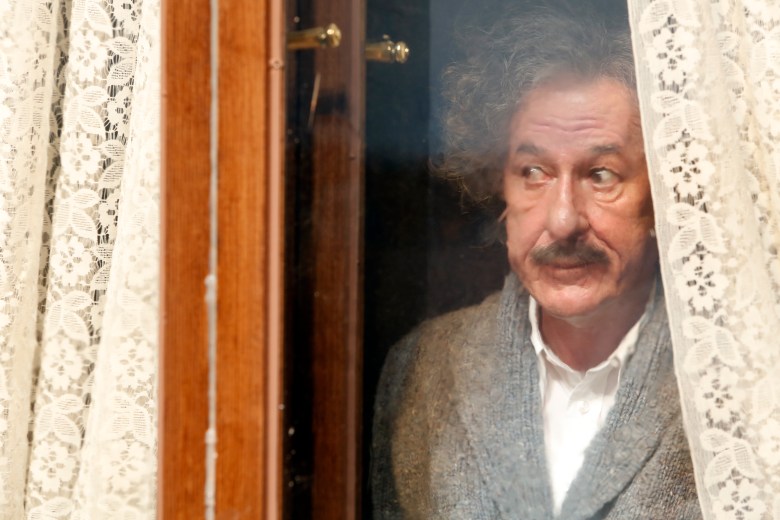 In accomplishments, impact, and general appearance, there are few figures in history who need an introduction less than Albert Einstein, a man whose impact on global culture is well-documented and rarely disputed. “Genius,” National Geographic’s largest foray into scripted drama to date, wants to make the point that, even in his day, Einstein was already a celebrity.

Out on the streets of Berlin as a rally passes or in a lecture hall with eager observers lining the rafters, the Einstein of “Genius” becomes a figure that demands attention. His scientific insights made him a target for fascist suppressors and inquisitive thinkers alike, which makes the show’s continuous decision to boldly intone Einstein’s greatness, as if it were something to be proven, all the more curious. Context is vital to understanding the man’s true achievements, but the self-imposed, continuous weight of history somehow robs this series of some of its most revelatory insights and dramatic power.

Part of that all-consuming drive is that “Genius” traps every conversation, romance and geopolitical conflict in Einstein’s orbit. Few interactions have the chance to stand on their own merits without having to be tied into how they contributed to Einstein’s greatness. Sure, Einstein has been at the heart of World War II triumphs and the modern understanding of the space-time continuum for decades now. But that’s precisely why this show could stand to skip the grand proclamations and spend more energy on the real human conflicts driving this biography.

One of the show’s self-imposed difficulties is that “Genius” bisects its storyline, hopping between Einstein’s 1932 escape from Europe during the rise of the Nazi regime and his time at university as a younger man. This doubles the opportunities to enter Einstein’s psyche, but it also multiplies the history-setting nods and the breathless proclamations of the thinker’s place in the changing world around him. “Genius” is the TV brainchild of writer Noah Pink and showrunner Ken Biller, but the Ron Howard-directed pilot does show some trademark shades of the director’s past work. Given Howard’s history with tales of brilliant mathematicians, it’s not surprising when the representation of Einstein’s ideas shift from lectures in front of a chalkboard to swirling visual aides. These are helpful overviews, but they feel like trying to retroactively insert Einstein into a time-shifted version of “Cosmos,” rather than the more satisfying investigation of the interior life that lead to those discoveries.

The complex theories of mathematics and science that Einstein helped pioneer shouldn’t be the sole property of those with an advanced degree. But the process of making these ideas more accessible only increases the show’s reliance on tidy, neat allegories for Einstein’s tumultuous personal life.

Framing Einstein’s younger days as something akin to a “Shakespeare in Love”-style intertwining of spontaneous inspiration and newfound love isn’t a novel setup, but the show’s shrewdest move is in its casting of Johnny Flynn as the younger version, with unkempt black hair replacing the white locks of dorm room posters galore. With the British rom-com series “Lovesick” already under his belt, Flynn is quickly establishing himself as one of TV’s most charming and versatile leading men. Few young actors could pull off playing Einstein having to playfully question a romantic interest “What is time? That’s the real question” without being smothered by its preciousness.

Even at an advanced age (played as an older man by Geoffrey Rush), Einstein’s charm is palpable. But early in its run, in the episodes made available to critics, the elder Einstein finds history happening to him rather than working as an agent of change. As he makes a passionate case for the necessity to resist the fascist movements taking hold around him, it’s an interesting refraction of the intellectual rebellion of his youth. The Young Einstein timeline also offers the chance to introduce Mileva Marić (Samantha Colley), Einstein’s first wife and — as “Genius” shows — a brilliant mind in her own right. Though Colley is burdened with some of the same reductive lamenting and theorizing that plagues her counterpart, her performance is a testament to what the show discovers the further it veers from the bullet points of the familiar Einstein bio. When “Genius” is freed from having to insist how every conversation is building towards a paradigm shift, filtered through one man’s achievements, there’s room for a more nuanced look at those in his inner circle.

Even in its lighting, “Genius” finds that same level of forced gravitas. Our hero is often placed at the front of lecture halls, framed so that the sun pouring in from the windows high above forms a kind of halo around his timeless mind. Far more satisfying, though, is when that same natural light frames one particularly tender library encounter between Einstein and Marić. As the two are bathed in shadow, it’s a dramatic beat far smaller in scope; the insights it gives into the priorities of a young man on the precipice of a revolutionary career feel more earned and more human than an obligatory reiteration of iconography.

That’s largely how “Genius” approaches its flashbacks as well. Whether centered on Einstein or Marić, these tiny glimpses into the past are bathed in a haze, as if the audience can’t be trusted to keep track of another dueling timeline. And these glances only serve to connect the obvious metaphors of the past to wherever the show’s present happens to reside. It’s a telegraphed kind of character development that oversimplifies the complex lives and motivations of the people underneath.

“Genius” is most compelling as the origins of a man who would achieve greatness, rather than an attempt to wedge that greatness into an otherwise-normal young adulthood. With shades of a college romance drama, a case study in political resistance and a dash of spy thriller thrown in for good measure, it’s a show that has one of history’s biggest personalities to build around. But like so many other outsized historical figures, it’s an anchor that requires careful handling: if made too large, it has the tendency to drag everything else down with it.