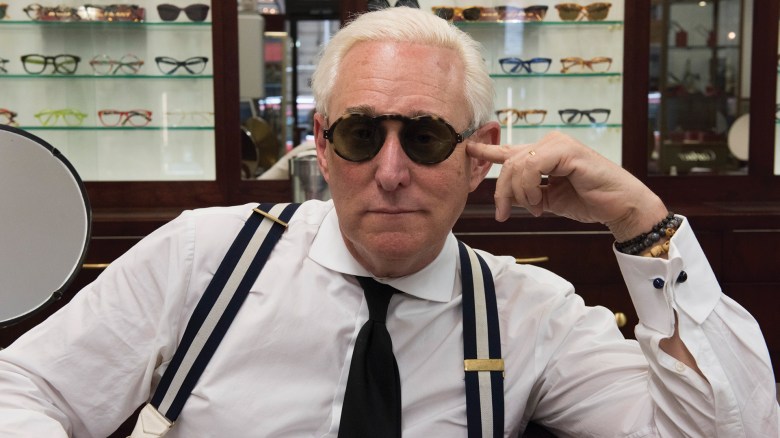 You may not know Roger Stone’s name, but I absolutely guarantee that you’re familiar with his work. A self-described “agent provocateur” who’s dedicated his entire life to becoming (and remaining) the Machiavellian puppet-master of American politics, Stone is the closest thing that Washington D.C. has ever had to a genuine supervillain. Transformed by a chance encounter with a radioactive Barry Goldwater book when he was just a kid, Stone immediately began fashioning himself into a destructive force of nature. It would take a while before the body-building dandy started dressing like the Riddler, but in first grade he was already feeding his classmates disinformation about how a certain presidential candidate was in favor of school on Saturdays, and at 19 he became the youngest person named in the Watergate scandal (and he was proud of it).

In the ’80s, he practically invented the SuperPAC, supported dictators, and worked with Paul Manafort to demolish the boundaries between lobbyists and consultants. In 2000, he incited the “Brooks Brothers Riot” that crippled Al Gore’s chances in the Florida recount. In 2004, he worked on Al Sharpton’s campaign in an effort to sabotage the Democratic primaries, in 2008 he masterminded the Eliot Spitzer scandal, and in 2011 he encouraged a long-time advisee named Donald J. Trump to explore the political upside of the “Birther” movement. In 2016, Stone helped knock the world off its axis.

He may be an eccentric old man with a penchant for group sex and a Richard Nixon tattoo on his back (oh yeah), but Stone’s ethos has altered the course of human history. The lucid, riveting, and profoundly nauseating documentary that Dylan Bank, Daniel DiMauro, and Morgan Pehme have made about (and with) him details exactly how that happened. Their film argues that Roger Stone isn’t just the “dirty trickster” of the Republican Party, but rather that Roger Stone is the Republican Party. And it makes one hell of a case. Of all the non-fiction movies that have already been made about the toxic cesspool of the 2016 election, or how Trump emerged from it like a leather-tanned Swamp Thing, “Get Me Roger Stone” is the one that best articulates how we got here and who’s to blame.

Shot over the course of five years, “Get Me Roger Stone” filters the last four decades of American politics through the uniquely vile lens of its namesake, and the resulting viewpoint is clarifying in all the worst ways. Part biography and part history lesson, the film opens with Jeffrey Toobin referring to Stone as “a malevolent Forrest Gump,” and spends the rest of its running time proving that assessment to be hilariously on-point. The doc may be as formally staid as these things get (a digestible puree of talking head interviews, archival footage, and vérité highlights), but it uses that familiar approach to thread Stone directly into the fabric of our nation’s defining moments, blurring the line between where he ends and history begins.

READ MORE: The 2017 IndieWire Tribeca Bible: Every Review, Interview, And News Story From The Fest

The filmmakers were only able to do that, however, because Stone invited them to trace that line for themselves, allowing them into almost every area of his life and calling them “Commie pinko homosexual liberals” in the process. And while denial has always been one of his greatest weapons, Stone seems to be getting a bit more comfortable about fessing up to his past transgressions. In part, that’s because the political landscape has changed enough for his old sins to cause new trouble. And in part, that’s because Stone understands that elections are won by prioritizing the macro over the micro — that the number of people who see this movie are a fart in the wind compared to the number of people whom he could influence by, say, colluding with Russia to help spread brainless conspiracy theories about Hillary Clinton. In fact, Stone relishes in that ugly truth, he lives to mock his enemies and piss on their graves. It’s one of the things that makes him such an ideal documentary subject — candid, petty, and volatile, but also completely predictable thanks to a monk-like devotion to his own mercenary credo. The film is framed by the core tenets of his philosophy, which are helpfully distilled into bullet-points called “Stone’s Rules.” Here’s a big one: “Stone’s Rule: Better to be infamous than never famous at all.” Or “Stone’s Rule: A man isn’t finished when he’s defeated, he’s finished when he quits.” Stone, it soon becomes painfully clear, only cares about winning. He doesn’t give a shit about politics, he just loves campaigning. He’s not an ideologue, he’s just a sports fan who drafted himself onto the only team that was willing to cheat. Yeah, he’s probably trolling in the footage we see of him participating in a gay pride parade (and flipping off some bystanders), but he clearly believes in all sorts of social freedoms — it’s just not convenient for him to fight for them.

Needless to say, of course Roger Stone was one of the first people to identify Trump as a potential battering ram, of course America’s most brazen puppet-master never let America’s richest and most oblivious puppet out of his sight. Stone might be a lot smarter than Trump (who isn’t?), but this movie convincingly illustrates why those two guys are peas in a pod. First and foremost, both are repugnantly entertaining caricatures; “Get Me Roger Stone” never asks you to root for its eponymous agent of chaos, but he’s a more compulsively watchable villain than any Marvel or DC movie has ever had. It’s also crucial that both Stone and Trump believe morality to be a weakness, and believe it too deeply to change their spots when the cameras are rolling.

Indeed, Stone has supplied Bank, DiMauro, and Pehme with far too much material, and also not enough. Of course the film builds to the 2016 election and walks us through the rollercoaster of Stone’s involvement in it (which culminates, naturally, in his giddy appearance on Alex Jones’ Election Day broadcast), but it does such a good job of contextualizing its subject that it doesn’t feel necessary to see him work his voodoo all over again. Stone, so transparent throughout most of the doc, is obviously tight-lipped about Russia and James Comey and so on, and everything we see him do at the RNC or on CNN are stale for something so recent. Perhaps these portions will play differently in 10 years, but this is a movie of the moment, and at the moment they feel like a needless kick in the groin. Then again, what doesn’t these days? It may hurt more than it has to, but “Get Me Roger Stone” will remain essential viewing until the pain goes away.

“Get Me Roger Stone” premiered in the Feature Documentary section of the 2017 Tribeca Film Festival. It will be available to stream on Netflix starting May 12th.

This Article is related to: Film and tagged Donald Trump, Get Me Roger Stone, Reviews, Tribeca 2017