The newest Showtime/Sky series is a compelling watch (especially when Ridley is behind the camera), but its attempts to be comprehensive often hold it back. 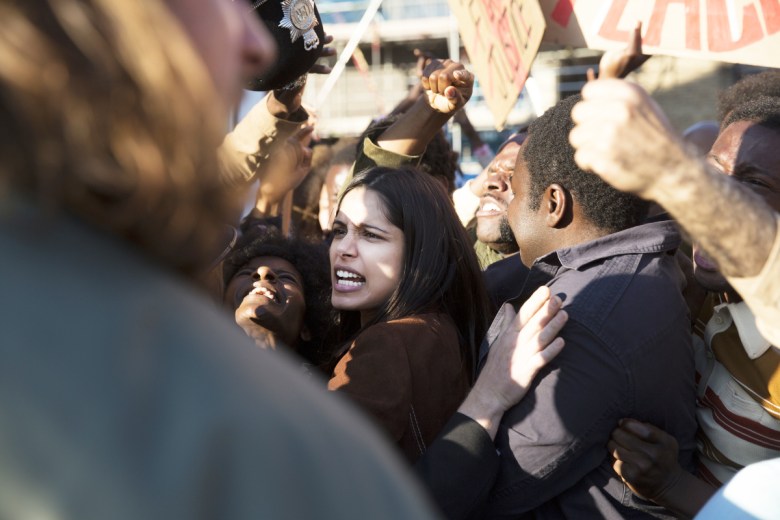 Most compelling tales of war derive their power from their lack of triumph. In armed conflict, successful action is often coupled with grave consequences and seeing a particular battle through all sides only reinforces that idea of loss. Even the momentarily victorious parties are aware that their success, as a rule, must come at the expense of their foes.

For a series built on opposites, that’s the binary emphasized most in “Guerrilla,” the new six-part drama from Showtime and Sky and the latest foray into television for executive producer John Ridley. Charting the evolution of a small, committed group of black power advocates to members of a newly-formed armed resistance group, it’s a show that continuously reevaluates its own battle lines.

Babou Ceesay and Freida Pinto star as Marcus Hill and Jas Mitra, a couple living in 1971 London, engaged with the growing anti-establishment movement in their community. As Marcus looks for employment as an English teacher and Jas works at a hospital, they find an opportunity to become more entrenched in their cause by freeing Dhari Bishop, a political prisoner. Incited into action by a horrific act of police brutality, their increasingly radical actions challenge their commitment to each other and to their ever-shifting band of compatriots. Ridley and co-writer Misan Sagay choose this burgeoning underground cell as an illustrative case study in revolution, but they acknowledge that this fictional group is part of a fabric of resistance that includes threads we don’t see in these six episodes. The individuals that make up this particular drama are conversant in similar uprisings happening across the Atlantic (the 1967 Newark riots, Huey Newton and Eldridge Cleaver are all referenced on multiple occasions). As Marcus, Jas and Dhari branch out to find potential partners and sources of funding, single conversations become primers on rival interests in the cause, from Marxists to Maoists to separatists movements of varying racial makeup.

While an all-sides view of this ideological battle makes for a complex understanding of the individual players, the farther that “Guerrilla” strays from this central cell and its counterparts, it does so onto shakier ground. The show also embeds itself in Scotland Yard, at the Metropolitan Police’s “Black Power Desk,” namely alongside vehement anti-activist officer Nicholas Pence (Rory Kinnear). Pence’s increasingly sinister methods of targeting Marcus and Jas’ collaborators are part of the show’s delicate balancing act, but the show ends up affording a disproportionate amount of time to Pence’s psychological and family-based turmoil. Kinnear embodies Pence’s internal struggle and hypocrisy with enough nuance that repeatedly returning to his home life seems an unnecessary added layer, especially when that attention might be better served on the changing makeup of the resistance at the show’s heart. All of the show’s competing interests do find themselves manifested in Kent Fue (Idris Elba), the show’s greatest example of the scope that “Guerrilla” strives for and the consequences of stretching it as thin as it does. Balancing competing interests from all sides of the battle for public control of the changing power narrative, Kent finds himself torn between his personal history with Jas and an academic community insistent on denouncing her increasingly radical actions. Though the role plays to Elba’s toned-down strengths, Kent feels more like a convenient hub to connect these rivalries.

Among the core members of this resistance group, “Guerrilla” finds a far more compelling internal struggle. For Jas, the shifting aims and allegiances of this faction of the Black Power movement play out across class and racial divides, but her place as a woman is met with equal resistance at various turns. Pinto charts Jas’ particular journey from a woman projecting authority to one who seizes it with a quiet ferocity.

There’s also an unmistakable electricity to Nathaniel Martello-White’s performance that capitalizes on Dhari’s blatant fearlessness, as the political prisoner becomes more of a public symbol. A more conventional series would have placed a character like Dhari at the fore, letting his outspoken demeanor and dangerous level of confidence be as front and center as his character is in the recruitment effort. But letting Jas and Marcus be the narrative anchor allows Pinto and Ceesay to demonstrate the incremental change that give their eventual lightning-strike actions added heft.

Even before those powder keg moments come, the gravity of everyone’s rival pursuits is ever-present. When Max Richter’s electronic drone isn’t evoking a specific sense of dread, the prospect of grave danger still hovers over every interaction. Time after time, when characters talk about their willingness to give their life for their cause, it’s not just to remind the audience of the stakes of this struggle, it’s a constant revaluation of their commitment. Ridley leaves an indelible directorial stamp on the opening third of this series with some of his standby sensory touches. Foregoing reverse shots and accentuating the peripherals of a sound mix, he acquaints us with these characters by presenting only one half of a conversation or bathing their anxieties in the sonic chaos surrounding them. Marcus’ trajectory from intellectual revolutionary to a man willing to carry an automatic weapon is charted in the unbroken reactions to the various forms of rejection he faces along the way.

Every time tensions reach a boiling point, Marcus, Jas and their cohorts find themselves again on the precipice of change. The waning moments of the stellar final episode do the same, in a way that hints at the possibility of continuing this story. If this does end up being a prelude, having done its best to tackle the universal nature of revolution, “Guerrilla” has a clear path for the specific avenues that would best continue this story.