The Bigelow-produced VR experience shows the incredibly dangerous world of rangers on the front lines protecting elephants from ivory poachers. 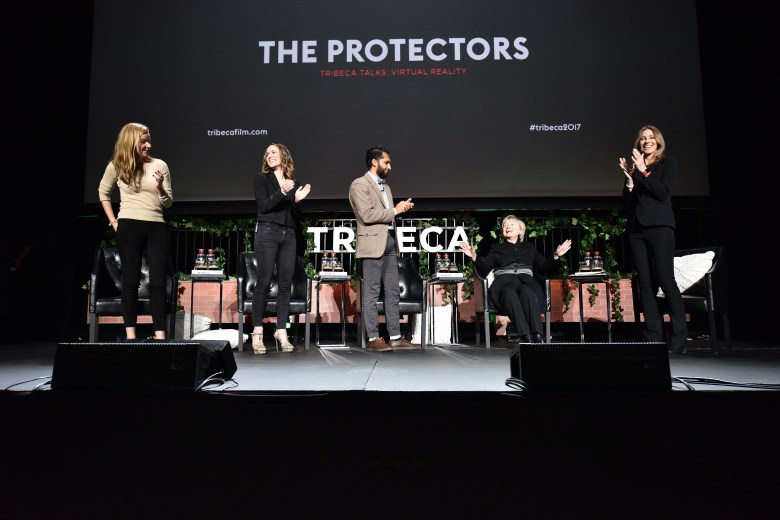 On Earth Day, the environment was front and center at the Tribeca Film Festival as Hillary Clinton made a surprise appearance at filmmaker Kathryn Bigelow’s talk about the need to protect elephants against poachers.

“Here it is Earth Day and we are marching on behalf of science,” Clinton said to the Tribeca crowd. “And part of science is understanding the intricate relationships that we share with all those on this planet and in particular large mammals, like elephants.”

Clinton says she first became really engaged on this issue as Secretary of State because it was becoming clear this was not only a horrific slaughter of elephants that endangered their survival, but also a national security issue as the funds from the lucrative trafficking of ivory was funding “a lot of bad folks,” including terrorist activity.

“I’m very proud [that] under President Obama the United States passed a near federal ban on transportation and the interstate trafficking of ivory in our own country,” said Clinton. “And we worked very hard to convince the Chinese government, which made a very important announcement last year [to ban ivory].”

Clinton said the three-prong policy approach to this matter is simple: “Stop the killing, stop the trafficking, stop the demand.”

Considering China and the U.S. are the two biggest markets for ivory, she put great deal of effort toward these bans while running the State Department. She also continued these efforts after leaving the Obama Administration through the Clinton Foundation by helping create a group called the Elephant Action Network, which brings together different groups tackling this issue from various angles to help find ways they could support each others efforts.

One of those groups is African Parks, which manages the Garamba National Park that is featured in the Bigelow-produced VR experience “The Protectors” – making its world premiere at Tribeca this week. The experience, directed by Imran Ismail, brings viewers inside the extremely dangerous life of the well-trained park rangers who risk their lives to fight off ruthless poachers. “What we’ve been doing since 2005 is holding the front line – this is ground zero in terms of the poaching war and it is war,” said Andrea Heydlauf of African Parks at the talk. “[There’s an] influx of poachers coming in from all sides… sadly, just last week we lost two war rangers and between them they leave behind their wives and 11 children.”

Clinton praised the the VR experience and Bigelow’s commitment to the issue.

“That’s why this virtual reality experience that you are providing Kathyrn is so critical, because it is portal where people can go into and think about — here we are in New York — what can I do,” said Clinton. “And part of that is protecting these rangers who are up against some of the most ruthless killers anywhere on the planet right now and are doing the best they can. We need a bigger force and it needs to be supported internationally.”

Clinton recommended the audience visit Outfit-a-ranger, where donations go to buying the rangers some of the basic supplies, like a decent pair of shoes and equipment, needed to fight poachers in incredibly difficult terrain.

For her part, Bigelow — who largely played moderator this evening — highlighted the positive developments that her guests had made to stop poaching, but warned, “time is the enemy on this one.” It was a point that was underlined by Heydlauf, who noted the elephant population in Garamba had gone from over 22,000 to under 1,300 in the last four decades.