The "Krisha" director's sophomore film confirms his visionary approach to tense family drama — this time, within the confines of a post-apocalyptic thriller. 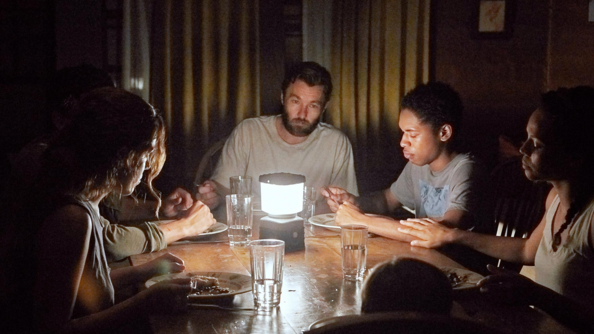 There are many movies about horror in the woods, but “It Comes at Night” stretches that trope into a paranoid headtrip. Writer-director Trey Shults’ sophomore effort follows up on the promise of his tense family drama “Krisha” with another expertly-told look at family bonds jeopardized within the claustrophobic boundaries of a creepy home. This time, however, the stakes have gone beyond the challenges of addiction and estrangement to involve matters of life and death.

Once again, Shults has delivered a top-notch psychological thriller, but “It Comes at Night” builds an unnerving atmosphere around unspecified sci-fi circumstances. Its central premise involves the struggles of a family unit in the aftermath of a plague that seems to have wiped out much of civilization. That much may sound familiar, but it’s only a starting point for more unpredictable turns.

Patriarch Paul (a scowling, bearded Joel Edgerton) manages the daily routine alongside his wife Sarah (Carmen Ejogo) and their 17-year-old son Travis (Kelvin Harrison Jr.). While they appear to have figured out a sturdy approach to getting through each day, the opening scene leaves no doubt that danger hovers at the center of their existence: As the trio wear gas masks, Sarah’s ailing father is dragged out to the woods and shot, the body burned, and Travis’ frantic expression suggests that this wasn’t the coming-of-age story he expected to find himself in.

In a simpler movie, this may been a key turning point; instead, it’s a masterful prelude to the deeper morality play that follows. In the middle of the night, the family discovers an intruder in the form of Will (Christopher Abbott), who claims to be scouting for water to help his wife and young child 50 miles south. Naturally suspicious of his claims, Paul drags Will outside for a tense, daylong interrogation session before venturing with him onto the road.

Once there, they find themselves enmeshed in an abrupt showdown that proves Shults can frame a fast-paced action scene just as well as his trademark family spats, but even here he avoids the pressure to show too much — the hints of sudden movements and abrupt sounds go a long way toward enhancing the constant, jittery sense of danger slowly driving all these characters toward some unknown madness.

When the pair return, they’re accompanied by Will’s young wife Kim (Riley Keough) and their young son Andrew (Griffin Robert Faulkner). A chic, attractive Brooklynite couple, they become immediate objects of fixation for the soft-spoken Travis, whose evolving sexuality and frustration over his limited surroundings lead him to develop a voyeuristic relation to the newcomers as they move into an empty room.

At first, the two families appear to find some modicum of contentment in a cooperative existence — but once again, Shults doesn’t place much faith in those assumptions, and the idyllic existence doesn’t last long. When Travis’ dog goes missing, it’s only the first step toward a slow descent into suspicion and desperate measures that make it hard to determine which family has the moral high ground, or whether any of them do.

In the grand tradition of horror maestro Val Lewton, Shults plays with his audience’s imagination by using subtle hints rather than big reveals to generate the bulk of the scares. It’s an appropriate new entry in the ever-expanding roster of producer and distributor A24, which also handled horror breakout “The Witch,” another effective dose of minimalist horror told in the confines of an eerie, isolated forest. “It Comes at Night” may as well take place in the same universe of unseen things that go bump in the night — and the wide-eyed people forced to deal with them.

At its center, Travis remains a fascinating, inscrutable figure, at once resentful toward his father’s domineering approach and subservient to his every move. Relative newcomer Harrison delivers a remarkable performance loaded with glimpses of unstated feelings — attraction, anger, resentment — and becomes the vessel for the movie’s occasional ventures into body horror, as he’s repeatedly afflicted with nightmares of slimy black vomit and dead-eyed zombies invading his room.

Not every shocking detail adds up, and the payoff isn’t as exciting or original as the taut showdown leading up to it. But Shults excels at the slow accumulation of details, and by the end, the outcome is less relevant than the movie’s sharp blend of sci-fi and gothic elements in service of a thrilling chamber drama.

“It Comes at Night” would work just as well as a play if Shults didn’t inject every scene with a keen cinematic eye. Cinematographer Drew Daniels’ roaming Steadicam glides through the tangled woods as Brian McOmber’s thundering score enriches the uneasiness throughout; Shults exploits the inherent scariness of long, shadowy corridors illuminated by a single, weak lantern, elevating the effectiveness of that image to high art.

While it doesn’t overstate its themes, “It Comes at Night” fits snugly into a familiar post-9/11 subgenre, calling to mind a rash of recent narratives involving stable lifestyles crumbling in the face of new, mysterious threats. But you probably haven’t seen many of the other examples. From “Z for Zachariah” to “The Survivalist,” minimalist post-apocalyptic survival stories have repeatedly gone underseen, in part because they don’t entirely fulfill the potential of their central conceit.

That ends here. “It Comes at Night” consolidates the concerns of that recurring setting into a haunting statement. The movie’s big reveal is that the source of terror stems not from the battle to stay alive — but whether, in these dire circumstances, there’s anything left to live for.

“It Comes at Night” premiered at the 2017 Overlook Film Festival. It opens June 9.

This Article is related to: Film and tagged It Comes At Night, Joel Edgerton, Reviews