The star of "Detour" and producer of "Full Frontal" discusses his shift to scripted television and how he and his wife have adapted to a new set of challenges. 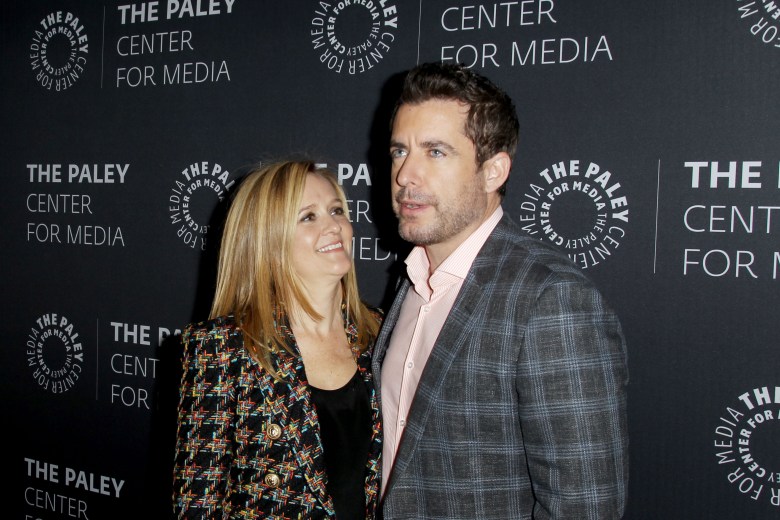 “The Daily Show” may have entered a new era with host Trevor Noah, but it’s not like the old cast went into retirement. Husband-and-wife contributors Jason Jones and Samantha Bee are among the most productive former members of the Jon Stewart “Daily Show” years — which is particularly notable once you discover they came close to taking over the program themselves.

Instead, the pair found a welcome home at TBS, where Bee hosts the weekly satiric news program “Full Frontal With Samantha Bee” (which will air the special “Not the White House Correspondents Dinner” this weekend) and Jones serves as an executive producer. Meanwhile, the couple is also behind the TBS comedy “The Detour,” a subversive family comedy that they co-wrote and in which Jones stars.

Now wrapping its second season, “The Detour” began as an over-the-top road trip comedy with Jones as a corporate whistleblower moving his family across the country. Its scope continued to evolve in the second season, when the family settled back in New York. This week, “The Detour” was officially picked up for a third season, and Jones is ready to go back to work. He paid a visit to the IndieWire office to discuss his current productivity and why he and Bee have no regrets about passing up on that “Daily Show” offer.

How did “The Daily Show” prepare you for writing a scripted show?

Every field piece I did on “The Daily Show” was a story that lasted five to six minutes. We had a protagonist, we had an antagonist, and often put them at odds. We knew the story we wanted to tell before we went in and often it was about plugging whatever character you have — in this case, a real person – into said part.

It was like making a lot of short films, but it was much harder because we were working with real people, and often they would not say what they previously said. I’d be like, “No! I have a really good joke based on that thing you said in that article! Can you say that thing again?” That was tough, because you can’t make people say things. With actors, you can be like, “Hey, say those fucking words I wrote.”

Considering how competitive it is now, how did you assess the opportunities coming your way after Jon announced he was leaving “The Daily Show”?

You know, there was a world where Sam and I were floated to replace Jon. The two of us were talking about it, but then…I didn’t really have too much interest in that, and then they greenlit “Detour” like four days after Jon announced he was leaving. I started talking to a guy I know at TBS, and we were like, “Hey, what if Sam comes over and does a show as well?” She was in the kitchen cooking, and I went, “Hey, would you want a once-a- week, half-hour show where you just talk about shit?” She was like, “I would love that.” I went, “OK, make her an offer.” Do the two of you ever think back on that “Daily Show” offer and think about what might have been?

I don’t think I’d have a life if that was the case. I mean, I’d have to rush back to the studio. I couldn’t be here right now. You’d be at “The Daily Show,” and I’d be talking to you for a minute and a half, and then I have to go do a show. It’s such a grind. They do shows four nights a week for 40 weeks per year. That’s just a lot of show.

How much time does “Full Frontal” take up?

For Sam, it’s the build-up of Monday and Tuesday since the show airs on Wednesday. It’s kind of like a denouement to the week. And then she can have her weekends.

How did your experiences on “The Daily Show” inform the way “Full Frontal” was conceived?

Full disclosure: We saw what John Oliver was doing [on “Last Week Tonight”] and we were like, “Oh, yeah. This stuff only needs to be on once a week.” Even at its height, “The Daily Show” would do one great show a week, one pretty good show a week, and then two “meh” ones. It was filler.

How has that kind of satire changed in the Trump era?

It hasn’t, really. I think it’s all the same. I don’t think it changes. People are forgetting how crazy President 43 was.

He is now, because we’ve had time. When he was starting two wars, he wasn’t a cuddly little guy who had watercolor paintings. He got us into two wars. That we’re still in.

I think people forget about that. Time cools you down a little bit. I remember going to protests here in the streets of New York in 2004 when he was going into Iraq. It was the same thing. Nothing really changed. We got a different guy now, and maybe he says funnier things, but Dan Quayle said funny things too. With comedic news, it’s about having a point of view. If you don’t have that, you don’t have a show. If you aren’t saying, “This is what I think,” why am I watching you? I can watch the news for both sides of the story. Did you ever think about turning “The Detour” into a movie? The first season could have been pitched as just that.

Listen, “Vacation” is one of my favorite movies of all time. I’ll still watch it once a year with my kids and laugh really hard at it. The smaller, subtler jokes make me laugh more than the bigger ones, like eating the pee sandwich. That’s funny once. Everyone talks about the golden age of TV right now, but the great thing about it is that in a movie format, you have two hours to tell a story. You don’t get to take any tangents. There’s just not enough time.

I don’t want to point any fingers at any particular studio for… never working for them. But there are certain ones that seem to, I don’t know, just fart out ideas that just aren’t good.

Why do you think that keeps happening?

They just feel like retreads and the same cast of characters you see in everything just doing… And I think people mistake yelling really loudly for comedy. It starts and ends with the script, it really does. If the script’s not good, you’re never going to laugh at it. You can put lipstick on a pig. And you can hire great comedic actors to come out and do their shtick, and yell, or roll around in something. But if the story’s not there, it’s not going to last.

Have you turned down a lot of stuff because of that?

I think you’re overestimating my career. Thank you for suggesting that I have the ability to turn things down.

The first season of “The Detour” is a self-contained arc: You have this family on a road trip. They get there at the end of the season. Then you had to write another season. How much of the show did you have planned out in advance?

I had a three-season in my head. Figuring out a fourth one is gonna be tough. I have an idea for it, but I think it will be be the toughest. I’ve got three pretty much mapped out right now.

When did you know there would be a second season? I had a meeting with the network. We had finished season one two summers ago. And then I had a meeting in Atlanta with some of the bigwigs. Everyone got drunk. They were like, “Yeah, we’re keeping this going forever.” Of course, it was four months before I heard anything. But I started to think, “This will continue to thrive.”

To be honest, I was like, “They’re crazy if they don’t pick this up.” It wasn’t really a cocky thing. It was more just like, “This show is just kind of like hitting on all cylinders. We have great talent, good writers, good directors. They would have just been foolish if they didn’t pick it up. Everyone felt that, too.

I’ll tell you this TBS: They trust me, which is great. They still give me notes, like any other network. But we had maybe two executives on set, once each. It was pretty great.

A lot of the humor is vulgar. How integral was that to the writing process?

There was no safer take. The modus operandi at most networks is, “OK, do it this way. Now let’s make a safer one. Let’s not say ‘cunt’ this time.” I remember shooting pilots for networks where they were like “You know know, let’s say that with a smile. Let’s show the audience that you don’t really mean it.” Which takes all the teeth out of it.

But TBS wasn’t there to give me that. That was one of the things Sam and I were big on when we started talking about the show is that a husband and wife can have a very mean fight. But it means nothing, because ultimately you love each other and you’re not going anywhere.

At the end of the day, you’re just pent up. You’re just, like, gagging it out. And too often on TV, there are these mean jokes, but they’re said with a laugh. That is just the worst thing ever. No couple does that. So we wanted to create a very real couple who could love each other, but also yell at each other.

What shows did you consider when writing “Detour”?

Sam and Diane’s relationship on “Cheers” was always like a big one for me. They just fought like crazy. There’s one amazing scene where she slaps him and he slaps her back. You could never do that now. It’s more shocking. He didn’t hit her hard. But I just always loved that relationship, where those two just went at it, but they loved each other so aggressively at the same time. So I do think networks used to do that stuff. They used to hit hard.

READ MORE: ‘The Detour’ is Now TV’s Funniest Family, Thanks to a Chaotic Mix of Love, Weirdness, and Hockey Shots to the Groin

I just feel like they just want to cover all bases. They don’t want to offend. They don’t want to lose a viewer. They don’t want someone to write a letter to an advertiser and lose an advertiser. There’s just too much money at stake now. Back in the day, they’d go, “Yeah, this is what it is, guys. Take it. ‘Cheers’ is one of the most popular shows on TV. We don’t care if you lose advertisers.’” Now, because there are 500 scripted television shows, everyone wants a little piece of that advertising, and it’s draining.

Do you and Sam watch your shows when they air?

How do you think “Not the White House Correspondents Dinner” will go?

I don’t even think Sam knows. I’m not gonna say who, but there is going to be a very big guest.  I think it could be like a jaw-dropping moment.

This Article is related to: Television and tagged Interviews, Jason Jones, Samantha Bee, The Daily Show With Jon Stewart