The "Imaginary Mary" star wanted a challenge with her next job, and boy did she get one. 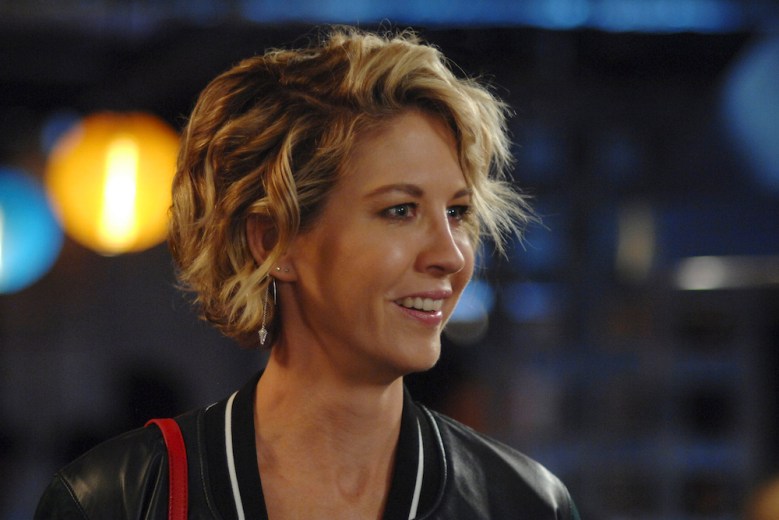 Fourteen years ago, Jenna Elfman starred opposite “a lot of green balls and green people.” The project was “Looney Tunes Back in Action,” a feature film where Bugs Bunny and Daffy Duck were digitally inserted into a live-action setting, and while Elfman now finds herself in familiar terrain as the lead of ABC’s new sitcom “Imaginary Mary,” everything has changed.

“‘Looney Tunes Back in Action’ gave me a jumping off point and an experiential reference for that [world], but in this we had nothing,” Elfman said during a recent press event, comparing her green points of reference in the film to a largely barren TV set. “And we did it on a TV schedule. With ‘Looney Tunes,’ we had all the time in the world. This, I was never even in my trailer.”

“Imaginary Mary” tells the story of Alice (Elfman), a workaholic sports marketing agent who starts a new relationship with a single father of three. Alice is so nervous about her new responsibilities, her subconcious invites back an old friend to help her out: Mary, voiced by Rachel Dratch, is two-feet tall, covered in white and blue fur, and can only be seen by Alice, who first created her as a child when her parents were splitting up.

But Mary isn’t around on set — not exactly, anyway.

“We have a real Mary puppet with a puppeteer who moves her through the space [during rehearsals] so we can figure out the blocking and the camera,” Elfman said. “Then we have a comedic actress who’s local to Vancouver who reads all her lines with me offscreen.” The crew then marks eye-lines for Elfman, so she knows where to look when the cameras are rolling, and the set is emptied out. She’s acting against thin air, and Elfman has to remember everything they’ve just blocked out for the scene take after take, setup after setup.

“As soon as [Mary] starts moving or coming toward me, I have to remember those points in space,” Elfman said. “Sometimes there’s 11 of them, plus I have to know my lines and the emotional beats — it’s a lot! But that’s why I was interested in it. Having other actors in the scene who don’t know Mary’s there is a challenge, comedically. You have to play these dual realities.”

Part of that dual reality is getting to know the people who are making Mary. Because Elfman didn’t have a physical co-star in scenes with her furry little friend, she had to imagine the reactions Mary might have based on whatever was in the script. But that can all change in post-production, which Elfman found out for herself after shooting.

“I went to visit the production house after we finished filming and saw 25 animators who are my co-stars!” Elfman said. “It was a whole dimension that became alive to me in a different way than when I was filming.”

Elfman realized she could work with these “co-stars” to help shape the comedic rhythms of not only Mary’s performance, but her own. After all, they’re spending hours staring at every frame of her performance, so why not take advantage?

“I could really sit down with these guys and plan out certain reactions and relationships, and then have that in my head while I’m filming,” Elfman said. “That’s a whole other expansion of the performance. It’s never-ending, the amount of knowledge in a new arena like this.” The creators of Mary realize this as well. Patrick Osborne, the co-creator of the series and Mary’s primary animation designer, said they tried out two different versions of the creature before settling on what fans see today.

“It went through a lot of iterations — conversations, napkin sketches, more conversations — until we kind of landed here,” Osborne said. “And honestly, we didn’t land here until after the pilot. […] Then the writing went [in a different direction] from the little monster that it was [originally], and she needed to have more appeal and arc. We realized we needed the character to be likable and not just be a cute little thing.”

“They tore apart my initial drawing and made it better,” Osborne said, citing the connections at Disney for helping influence the final design. “It’s TV, and we had to make a decision.”

But will Mary change again, over time? Will Alice’s imaginary friend develop as Alice does?

“We’ve talked a little bit about [that],” Osborne said. “You’ll have to watch and see. In success, we hope to open up that work a little more and evolve with Jenna’s character.”

Elfman, too, is hoping for more time with Mary.

“I think I did a good job in this first batch [of episodes], but I definitely want to expand on that,” Elfman said. “My learning curve is all on camera. I learned more and more [every day], and there’s still more I’m learning.”

This Article is related to: Television and tagged Interviews, Jenna Elfman