Cordon goes head to head with the action star in the violent but hysterical digital short "Escape from Kurt Russell." 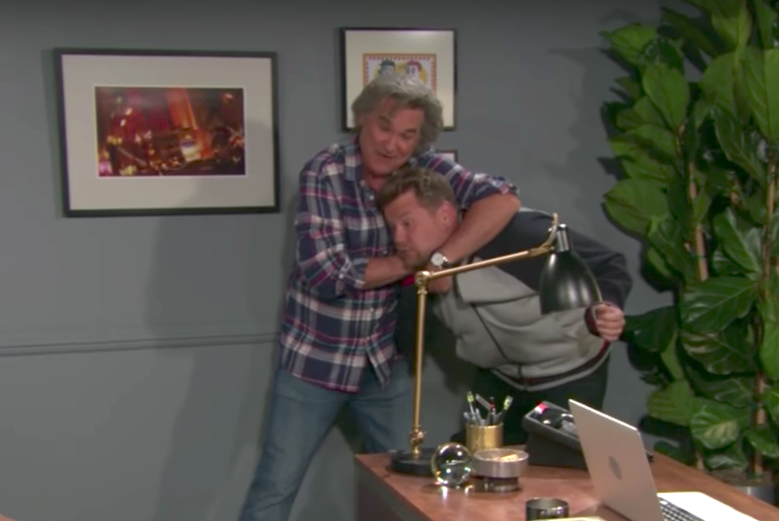 James Cordon can’t escape Kurt Russell. In the hilarious new sketch “Escape from Kurt Russell” that aired Thursday on CBS’ “The Late Late Show with James Corden,” Russell and Corden run into each other in an office building, where Russell engages in some friendly sparring and jabbing.

“Let’s see it!” Russell says, throwing up his hands like a fighter while Cordon awkwardly tries to play along. “Come on baby. Get em up. Let’s see what you got. You still got it?” Russell then lands a thunderbolt of a dead arm on Cordon, before saying a friendly goodbye. “Ow!” Cordon says, writhing in pain and clutching his arm.

The pair run into each other twice more, with each encounter more violent than the last. We won’t spoil it, but Russell makes a references to both “Enter the Dragon” and “Smokey and the Bandit.”

Russell recently starred in Universal’s “Fate of the Furious,” which has taken in nearly $1 billion at the worldwide box office. He can also be seen in Marvel’s “Guardians of the Galaxy Vol. 2,” which hits theaters on Friday, May 5. In the film, Russell’s first appearance in the franchise, he plays Ego, father to Chris Pratt’s Star-Lord.

To watch “Escape From Kurt Russell,” check out the video below.

This Article is related to: Television and tagged Guardians Of The Galaxy Vol. 2, Kurt Russell, The Late Late Show with James Corden