Sandler's third Netflix comedy arrives as something of a mission statement, finding a loose moral justification for all of his bad movies. 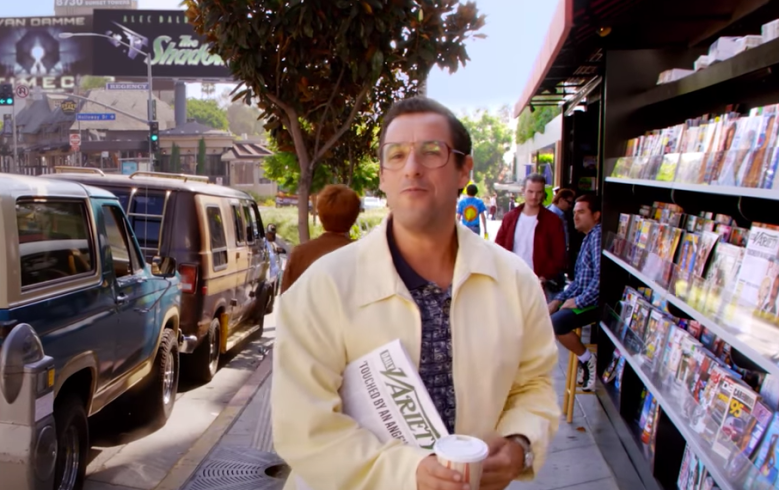 The “Lawrence of Arabia” of half-assed Adam Sandler comedies, “Sandy Wexler” is an epic period piece that spans 10 years and 131 minutes of mildly amusing mediocrity before climaxing with a Rob Schneider cameo where he plays a Middle Eastern man in full brownface — it’s awful, and yet it’s almost objectively Sandler’s best movie since “Funny People.”

Of course, quality has never been a very useful metric for measuring Sandler’s work, and that’s especially true now that we’re knee-deep in an eight-picture Netflix deal which guarantees that, for the foreseeable future, we can expect new Sandler films to arrive with all the predictably of seasonal allergies. Once upon a time, he was a cottage industry — now, he’s an assembly line.

But if “Sandy Wexler” is only the slightest bit funnier than “The Do-Over” or “The Ridiculous Six,” the third of Sandler’s streaming offerings is also the first of them that feels like it has anything to say. In fact, a generous case could be made that this movie (if that’s what we’re calling these things) is something of a mission statement for the comedy icon — it doesn’t forgive his decades of drivel, but it reframes them as a selfless moral imperative. Inspired by Sandler’s longtime manager, “Sandy Wexler” argues that loyalty is more important than petty concerns like “fame” or “respect” or “making things that people can watch without wanting to die,” and the star’s body of work bears that out as a genuine personal ethos. Forget “The Fate of the Furious,” this is the most family-driven film of the week.

Imagine, if you will, the early 1990s: “The Arsenio Hall Show” is still on the air, Tower Records is booming, and the internet doesn’t really exist yet, so everybody who wants to become somebody needs help from someone like Sandy Wexler (Sandler) — not Sandy Wexler, but someone like Sandy Wexler. One of those sad Los Angeles caricatures who dresses like a blind Florida retiree and laughs a little too loud at every joke, the nasal and nebbishy Sandy is effectively a “Mad Magazine” parody of Ari Gold. He doesn’t represent Harrison Ford, he represents the guy whose heart was ripped out of his chest in “The Temple of Doom.” From a kooky ventriloquist (Sandler regular Kevin James) to a cursed trapeze artist (Sandler charity case Nick Swardson), his Filofax doubles as an index of Hollywood’s most hopeless dreamers.

But so what if Sandy has all the social grace of a cold sore — he cares. No, he can never find quality gigs for his clients, and no, he can never seem to remember their names, and no, there’s no use rooting for anyone dumb enough to trust this guy with their future, but the movie clearly wants us to believe him when he looks someone in the eye and says, “An agent is business, a manager is family.” That line may not work on Arsenio, but it’s convincing enough for Courtney (Jennifer Hudson, believe it or not), an incredibly talented singer whom Sandy discovers singing for little kids at an amusement park. The manager has stars in his eyes the moment he hears her voice, and their chance encounter sparks the start of a career that the film will follow from the bottom to the top and all points in between. After a surprisingly spirited first act, “Sandy Wexler” soon settles into a moribund rhythm, the story moving through the years so slowly that it feels like it’s being told in real-time. The only thing on Netflix that’s paced worse than the first season of “Iron Fist,” the movie runs slack as soon as Courtney makes it big. Sandler and Hudson may have less romantic chemistry than Donald Trump and Angela Merkel, but their characters share a certain earnestness, and the film’s sweet spirit can’t survive the decision to keep them apart for so long.

Instead of allowing any sense of humanity to take hold, “Little Nicky” director Steven Brill doubles down on a series of increasingly interminable comedic setpieces, dark voids of laughter that are only interrupted by a star-studded framing device in which showbiz luminaries like Lorne Michaels and Vanilla Ice wax poetic about their good friend Sandy. For every remotely clever scene (there’s a solid bit involving a severely stupid sound engineer, and a shockingly violent gag with a stunt raccoon), there are three more that stretch on for eternity.

At a certain point — roughly around the time that Terry Crews shows up as a baby-obsessed wrestler, or something — it starts to seem as though Sandler is happy to give up on the story so long as it allows him to fit in more of his friends. Is Sandy actually good for Courtney’s career, or is he too infatuated to notice that he’s hampering her success? Eh, never mind, Allen Covert just showed up. Is there anything behind Sandy’s malformed Hollywood dreams? Silence, children, Pauly Shore is talking (and he’s surrounded by a phalanx of babes). After making a number of movies in which he’s just been hanging out with his buddies, Sandler has made a movie about why: As “Funny People” first suggested, Adam Sandler is the patron saint of mildly talented comedians.

Loyal to a fault, he looks after the people he loves, and he cares about them a hell of a lot more than he does any of the films they make together — it’s not his problem that Netflix invented a business model that privileges casual viewing and then paid him a fortune to exploit it. The fact that “Sandy Wexler” is itself a tribute to one of Sandler’s closest friends in showbiz only cements the impression that he’s extremely eager to take care of his own. And that’s wonderful, but given how many more of these things he has in the making, it sure would be nice if Sandler reserved even a smidgen of concern for the rest of us.

This Article is related to: Film and tagged Adam Sandler, Netflix, Reviews