The resilient Parker foursome have fought weirdness with weirdness, making for good TV, great comedy and a faith in family rarely found elsewhere. 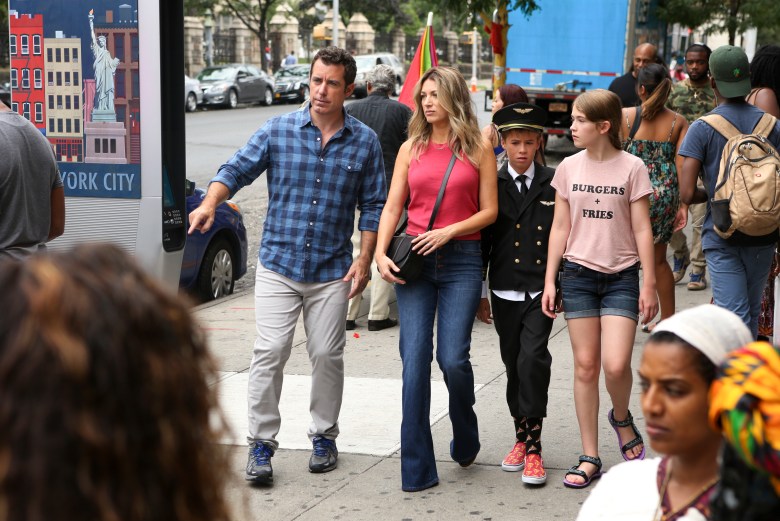 The opening titles sequence for “The Detour” is one of comedy’s best ongoing fakeouts. Every episode, Rob Kolar’s peppy faux theme song rings out above aerial shots of the New York skyline and happy moments of domestic bliss for the show’s Parker family. Five seconds in, the sound distorts and the unrelenting horrors of the previous episode repeat over glitchy, blurred screengrabs.

The shock value of the latter is probably what’s hooked more viewers for the TBS sitcom, now in its sophomore season. This year’s caravan of terror has included strewn contents of garbage bags, urine-soaked van interiors and a kiddie pool scene so unnerving, it’s better seen than described. But buried in that little bit of preamble is a kernel of truth: amidst the chaos, the Parkers have quietly become one of TV’s great families.

As the series’ pair of brilliantly woven flashback episodes have revealed, the Parkers’ origin story is a far cry from the Cleavers’. Nate (Jason Jones) and Robin (Natalie Zea) aren’t technically married in the eyes of the court. The paternity of Jared (or Jareb, as mood and sight gags dictate) has been a vague point of contention for much of the show’s second season. And their daughter Delilah is staring down life as a teenager with the same carefree abandon she brought to last year’s ill-fated down-the-coast roadtrip.

But even in the face of this uncertainty, the Parkers keep managing to return to a natural home base that finds the four of them closer than ever. Escaping the ever-watchful eye of law enforcement and the shifty outside influence of distant relatives has given this family 22 episodes of trials, forcing them to reevaluate their priorities and the extent to which they’d sacrifice for each other. Even the episode titles — “The Tank,” “The Drop,” “The Heat,” “The Dilemma” et. al — read like levels that the Parkers have passed in some immersive, family-strengthening video game. Along the way, this group hasn’t always been the most truthful. Those family recap episodes (where the present-day foursome pop up Ebenezer Scrooge-style in their pasts) constantly rejigger the central parts of the family mythology in a way that tests their faith in each other. What the Parkers might lack in complete honesty, they more than compensate for with frankness and sincerity.

In the process, “The Detour” has quietly been developing its own kindler, gentler spin on Occam’s Razor: if someone on the show is lying, the simplest answer is that they’re trying to protect the family. If Robin’s less than open about her money-making schemes of decades past or if Nate fudges some details about the circumstances of how the two met, it’s not for self-preservation. It’s to keep the bonds that connect all four of them intact.

Some of the show’s biggest laughs have come in scenes where any combination of the four Parkers toss their past indiscretions and fateful missteps back in each other’s faces, knowing full well that the fact that they’ve survived as long as they have that they must have been doing something right. There are punchlines here — plenty of them in one bedroom scene from the aforementioned indoor pool episode that says more about marriage than most domestic dramas can muster – but none of them come without a better understanding of what makes this family best-suited to work as a team.

It seems like this cast is getting more comfortable with working as a unit, too. In the Jones-directed seventh episode of this second season, as the Parkers face down a charity fun run, Nate gets a bear hug from Delilah, a hockey stick whack to the groin from Jare(d/b) and a strategically placed grab from Robin, right before all three leave him in the dust with the starting gun sounds. So many other family sitcoms would play this moment purely for laughs, but “The Detour” has carefully carved out a unique set of ways for this family to show each that they genuinely care for each other. That appreciation is also built around acceptance. The Season 2 promos for “The Detour” heavily featured Delilah’s talent show song “It’s Fun Being Weird,” a performance that, paired with her nunchuck skills, proved Ashley Gerasimovich the season’s stealth MVP. Aside from being an unshakable earworm, this song really is the best encapsulation of why the Parkers have become so endearing. They indulge each other’s quirks and shortcomings, knowing that their mutual understanding and cooperation is a fundamental part of the fabric that makes a family.

The interrogation room framing device that’s surrounded both seasons sets the stakes for what this family stands to lose from external pressures. But seeing Robin and Nate face down Edie, a mail fraud investigator (Laura Benanti, clearly having the time of her career) makes the later moments when the couple call each other their best friends feel that much more earned. Like a near-death experience can shake someone into doing the things they’ve always wanted, it’s been heartening to see these four reaffirm their faith in family in the face of imprisonment, bankruptcy and extradition.

Getting to that point of understanding has its tiny rewards. From Liam Carroll’s disbelief at discovering the particulars of adulthood to Zea’s unrestricted maternal protective rage, no one does incredulous shouting like the cast of “The Detour.” Even after being unwittingly trapped by a cult, being caught up in two global health crises and stumbling into one particular moment from Tuesday’s upcoming two-part season finale that might be the most shocking thing the show’s ever unleashed, there’s nothing like watching them parse out how they got there. And it’s even better when they do all it together.

The Parkers live in a world where all these things are not only possible, but they can happen to the same four people over and over again. We can still take one lesson from their exploits. In one interrogation room exchange, Nate summarizes his family pretty succinctly: “Our strength really isn’t doing the right thing. It’s surviving the wrong thing.”

If that’s not a perfect motto/rallying cry for 2017, then nothing is.

This Article is related to: Television and tagged Jason Jones, Natalie Zea, TBS, The Detour