This is the “Die Another Day” of its franchise — an empty shell of its former self that disrespects its own proud heritage at every turn. 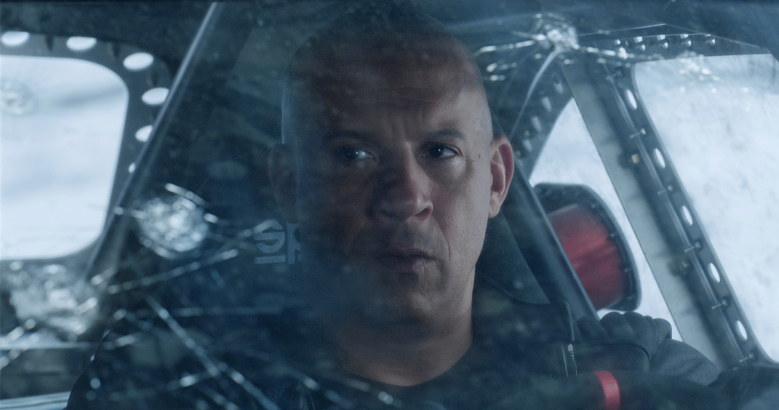 The first 10 minutes of “The Fate of the Furious” have everything that you could ever ask for in a “Fast and the Furious” movie, or any other movie for that matter. Dominic Toretto (Vin Diesel) swaggers through the streets of Havana, tasting the local flavor as a bass-heavy Cuban pop song bangs on the soundtrack. The sun is shining, the cars are classics, and the girls are wearing hot pink thongs that make their butts pop off the screen like they’ve been post-converted into 3D. It’s like someone threw a Pitbull video and forgot to invite him.

Then, as Dom comes across a weirdly well-organized group of local auto fetishists, he finds his younger cousin being antagonized by the baddest guy in town. But there’s an easy solution to this problem. You see, Dom lives by a code, and that code is simple: “All human conflict can be resolved by a rigged street race between two hilariously mismatched vehicles.”

So they race, the Cuban dude in a souped up beauty, and Dom in a rustbucket that hasn’t been touched since the Bay of Pigs — all the better for him to growl that it “doesn’t matter what’s under the hood.” A few pyrotechnics and a shot of NOS later, and a mob of smiling kids is surrounding Dom like he’s brought them all candy. The loser surrenders his keys: “You win my car, and you win my respect.” They’re brothers now. Dom throws an arm around his wife, Letty (Michelle Rodriguez), Fidel Castro rolls in his grave, and the title card skids onto the screen.

Welcome back to the ever-expanding world of the Fast and the Furious, where family comes first, physics comes a distant second, and logic blew a flat tire like three movies ago. What started in 2001 as a modestly budgeted “Point Break” ripoff has exploded into one a box office behemoth the size of James Bond, and Dom’s crew has evolved from a gang of low-rent gearheads into an international unit of government-funded super spies or something.

And that’s awesome. Where these movies are going, they don’t need roads. Or scripts. Or any pressing reason to exist. Sure, the last two installments of this hi-octane soap opera have fallen well short of the nigh-perfect “Fast Five,” and it’s increasingly clear that “Tokyo Drift” will never be topped for sheer personality (or sick drifting, natch), but the series has weathered all sorts of ridiculousness — even amnesia! — because it’s never betrayed the fundamental bonds that hold it together.

“F8” is the worst of these films since “2 Fast 2 Furious,” and it may be even worse than that. It’s the “Die Another Day” of its franchise — an empty, generic shell of its former self that disrespects its own proud heritage at every turn. How did the great F. Gary Gray, whose surprisingly strong remake of “The Italian Job” displayed a tremendous flair for comedic vehicular mayhem, waste the biggest budget of his career on such boring smash-ups? How did Diesel and co. manage to learn all of the wrong lessons from the last two movies, delivering an episode where everything feels so fake that even the “family” matters seem forced? It stalls the moment Charlize Theron shows up. As dull and uninspired here as she was riveting and iconic in “Fury Road,” Theron plays Cipher, an embarrassingly named super hacker who plunges “F8” into the most half-assed story of cyber-terrorism since “Live Free or Die Hard.” The franchise’s first female baddie, Cipher is regrettably also its least interesting — her villainous plot is so stupid that the film tries to pretend it doesn’t matter, and most of Theron’s performance is confined to cut-away shots where she says things like “Get ready for this” before hitting a button that triggers some bad special effects halfway around the world. Yeah, she has a henchman from “Game of Thrones” (Kristofer Hivju), but who doesn’t these days?

READ MORE: Universal Surprises With ‘Fate Of The Furious’ Screening At Cinema-Con

Anyway, Cipher blackmails Dom into her employ by showing him some very incriminating information on a tablet (cause she’s a hacker!), and while we’re left in the dark for much of the film’s first half, part of the fun is trying to imagine what could possibly convince Dom to turn against his family. The reveal itself is a satisfying exploitation of the character’s weakness; it’s one of the few details of Chris Morgan’s screenplay that doesn’t feel like it was written on auto-pilot.

But the buildup to it is a slog, and the fact that Dom doesn’t simply tell his pals what’s going on — rather than running them off the road and stealing a massive EMP bomb — is perhaps the dumbest thing that happens in the entire movie (and this is a movie in which Vin Diesel drives a muscle car over a nuclear submarine). But while Dom’s betrayal of his friends is obviously temporary, his betrayal of their franchise cuts much deeper. From its greasy analog origins to its plastic digital present, The “Fast and the Furious” saga has managed to speed right over any bumps in the road because every new adventure has held true to the core belief that loyalty supersedes everything else, including the law.

That’s why a criminal like Dom could forge such an unlikely bond with a cop like Brian O’Conner, and that’s why the series has organically been able to accommodate so many new cast members (most of whom are squeezed into this movie as interchangeable sources of exposition and comic relief) — if Dom gave his nod of approval, audiences were happy to welcome them into the fold. It’s why Dom instantly overlooked the fact that Letty was brainwashed by some bad guys, and it’s why Dom grunted “Words ain’t even been invented yet” when someone asked him what he was going to do to the people who killed Han.

Not so fast (not so furious). It turns out that words have been invented already, and those words are: “Host a lovely barbecue for them on my roof deck.” Jason Statham’s Deckard Shaw makes for some of the most fun moments in “F8” (the best of which is too good to spoil), but the ease with which Dom’s pals allow the “Furious 7” villain into their club is not only a fatal misread of what fans loved about these films, it’s also a tacit admission that their sentiments are as fake as their stunts. Han is never even mentioned. It’s nice that Paul Walker gets to live on through these movies — his unseen character is still chilling on a beach somewhere — but the actor’s death has eliminated the last remaining failsafes that were preventing this franchise from forgetting what it’s all about, and “F8” sends the entire enterprise careening towards a full-blown identity crisis. It’s telling that Diesel and Dwayne Johnson virtually never appear onscreen together, because at no point does it feel like Gray’s sprawling cast of characters is all in the same film. Dom is in a Hitchcockian thriller, Johnson and Statham are in a balls-out buddy comedy, Theron is in the “Swordfish” sequel that no one wanted, and Tyrese Gibson and Chris Bridges are wisecracking about the whole thing in the distant background. Whereas the previous movies were galvanized by a very real sense of camaraderie, “The Fate of the Furious” is more disjointed than a ten-car pileup, and just about as much fun. This family has officially become dysfunctional.

And while the problems might originate with the human stuff, the fallout is most obvious during the lifeless action scenes. The film’s signature stunt finds the gang racing through the streets of Manhattan, chasing after a Russian diplomat because… don’t worry about it. But Cipher, safely tucked away in the military airplane where her character spends most of her time, hacks into every car in New York City, reprogramming them like the polygonal renderings that they are and flinging them across midtown in perfect formation (“It’s zombie time,” she says as she presses the magic button). They pour through the streets like a tidal wave, the obvious CG distracting from the fact that half of the sequence was clearly shot in Cleveland.

As much a mess of conflicting tones and styles as it is of locations, this setpiece — like the rest of Gray’s movie — feels like a heap of random parts that were thrown together in the hopes that fate might somehow weld them into a roadworthy vehicle. It’s exhausting.

“F8” may be a good 20 minutes shorter than either of the last two chapters, but the parade of dull action beats make the movie feel as long as the never-ending runway from “Fast and Furious 6.” Only the climax, split between Siberia and the stratosphere, displays the cartoonish ingenuity required to take advantage of the “anything goes” tone — it’s so dumb that it almost swings back around to being smart again. Almost.  By the time we arrive at the film’s festive final moments, the underlying problem is painfully clear: It’s not just that this franchise has lost any sense of itself, it’s that “The Fate of the Furious” doesn’t find anything to replace it with.

“The Fate of the Furious” opens in theaters on Friday, April 14.

This Article is related to: Film and tagged Reviews, The Fate of The Furious, Vin Diesel