Jacobs' comedy of remarriage is a wonderful showcase for both actors and a surprising twist on a familiar scenario. 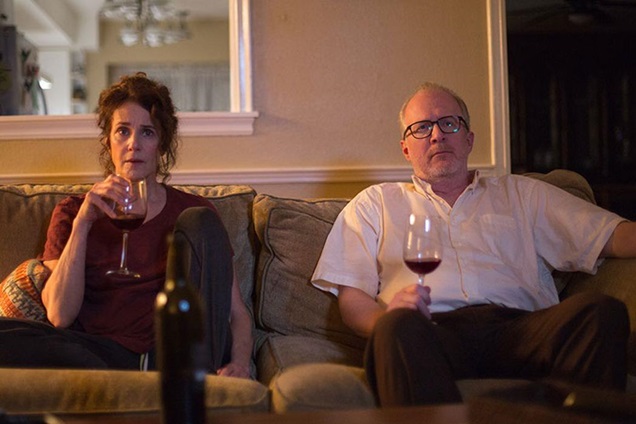 The concept of “The Lovers” is almost too cute: Middle-aged married couple Michael (Tracy Letts) and Mary (Debra Winger) lost interest in each other long ago, and have both launched extramarital affairs, promising their paramours that a divorce is on the horizon. In the midst of planning breakups, however, Michael and Marry suddenly rediscover the passion of their marriage, delay their secret plans to split, and the cheating dynamic twists around. The very notion of faithfulness is turned on its ear.

It’s enough to fuel a lightly satisfying studio romcom, and it already has — Nancy Meyers’ “It’s Complicated” — but “The Lovers” writer-director Azazel Jacobs has a more delicate approach. The movie deals less with awkwardness of this comedic scenario than the emotions it creates for its central duo, and the psychological struggle when words can only go so far.

If it was made 70 years ago, “The Lovers” would have been termed a “comedy of remarriage,” and likely fall to screwball director Ernst Lubitsch, who excelled at subversive portraits of domesticity threatened by carnal urges. Jacobs applies a soft touch, and at times his low key approach underserves the cringe-comedy potential of the material. But that only helps to draw out the extraordinary chemistry between Letts and Winger, who seem as liberated by the material as the characters they play.

When “The Lovers” starts, both members of the household have found the ideal escape from their boring marriage in commanding romantic opposites: Michael sneaks away with vivacious ballet teacher Lucy (Melora Walters) and Mary enjoys plush romantic evenings with novelist Robert (Aiden Gillen). At first thrilled at the prospects of launching new lives together, they grow increasingly frantic when it appears that both Michael and Mary have lost interest in their breakup plans.

Ultimately, the man and woman on the side are relegated to side players in this minimalist setup, and they’re the movie’s weakest links — cartoon villains whose very existence endangers the survival of a couple we want to see succeed. However, Jacobs’ screenplay manages to avoid cliché by toying with the ambiguity of communication created by this uneasy situation. Michael and Mary never explicitly acknowledge that they’re having affairs, but their passing glances say just enough; once their sexual compatibility comes back into play, it creates the conditions of a role-playing dynamic that stalls the end of their marriage with the prospects of fantasy.

Set to an ebullient score by Mandy Hoffman, “The Lovers” has a storybook quality that allows the serendipity of its clever premise to work far better than it should. But that doesn’t make it entirely predictable. By generating a constant uncertainty around each couple — and each couple’s other partner — Jacobs’ screenplay makes it unclear just how much Michael and Mary truly believe that they’ve rediscovered their marriage, because they’re both so bad at explaining it themselves. They could hover in this limbo indefinitely, but the third-act arrival of the couple’s college-age son (Tyler Ross) bring an outside perspective into the situation that forces the long-delayed confrontation to come to a head. Even then, however, Jacobs sidesteps the obvious showdown for something far more enlightening and unorthodox.

But it wouldn’t work without such commanding central performances. Letts may be best known as a playwright, but “The Lovers” provides a remarkable showcase for his unlikely leading man abilities. Like a twitchier Richard Jenkins, he gives Michael the sense of a man trapped between powerful desires and utter exhaustion. Winger, meanwhile, gets a perfect chance to remind viewers of her subtle abilities with her best role in years; looking constantly exasperating over her situation, her eyes darting back and forth, her face tells the movie’s story with brilliant sophistication.

With the arrival of the couple’s son, “The Lovers” contains echoes of Jacobs’ wondrous “Momma’s Man” (which starred Jacobs’ parents, avant garde filmmakers Ken and Flo Jacobs), in which a grown child hides away from his adult problems in his old bedroom without providing an explanation. This time, it’s the parents, rather than their offspring, suffering a setback they’re hesitant to express. “It’s almost over,” Michael tells the anxious Lucy, “so why not make it the least dramatic possible?”

Fortunately for us, that’s just not an option. While “The Lovers” unfolds in quiet, gentle terms for large stretches of time, it arrives at a remarkable payoff in the closing moments that deconstructs the very idea of a happy ending. Even a big musical number goes in a surprising direction, with Letts performing a solo rendition of “It Must Be Love” that says as much about Michael’s insecurities as Letts’ musical talent.

While not the crowning accomplishment of Jacobs’ still-young career, “The Lovers” caps a remarkable decade of original filmmaking. Jacobs’ career took off with introspective stories of lonely male characters in “Momma’s Man” and “Terri” before he took a hard right turn into TV with “Doll and Em.” That series managed to play with Hollywood stereotypes while pushing deeper into the way a hard-working life can crowd out personal connections. “The Lovers” consolidates the appeal of those earlier movies and the series while pushing beyond their limitations to explore an entirely new arena of experiences. It’s clearly the work of a storyteller who has aged out of angst-riddled youth and embraced the opportunity to let the stories grow up with him.

“The Lovers” premiered at the 2017 Tribeca Film Festival. A24 will release it in May.

This Article is related to: Film and tagged Debra Winger, Reviews, The Lovers, Tribeca 2017