Reversing the murder mystery formula, "The Sinner" asks why an ordinary woman would want to brutally kill some random dude — you know, besides centuries of patriarchal oppression. 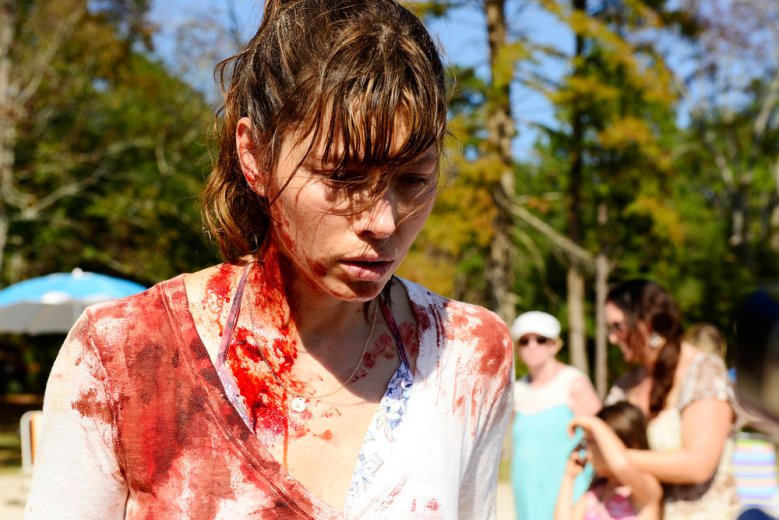 On a beautiful day at the beach, Cora Tannetti gets up off her blanket, picks up a knife, and repeatedly stabs a random man sitting in front of her. So why does a regular person walk up to a stranger and stab him to death? This is the very basic premise of “The Sinner,” USA Network’s upcoming adaptation of Petra Hammesfahr’s book, starring Jessica Biel (“BoJack Horseman”), Bill Pullman (“Independence Day”), and Christopher Abbott (“James White”).

The murder scene, which happens very early in the pilot, is a shocking, brutal, and blunt moment, foreshadowing more gruesome surprises to come. If the scene marked the start of a traditional series, “The Sinner” would feel like it’s already stringing out its big reveal. There’s too little backstory and too many opaque teases toward Cora’s motivations in the first hour for us to stick around for five seasons before it’s all sorted out.

But this is an eight-episode limited series, meaning answers are coming. There’s just enough intrigue in the set-up — and in Biel’s moving central performance — to justify finding out why this regular person did something so irregular.

READ MORE: ‘Bates Motel’ Finale Review: A Tragic Couple Gets Their Due in a Bloody, Beautiful Series Ender

Opening on Cora and her husband, Mason (Abbott), the episode quickly establishes the basics of an ordinary life: Cora has a good job in a business that’s thriving. She works with her husband, and jokes around with him all day. She mocks him for being a “mama’s boy,” and he teases himself about it the next morning. They’re close, seemingly happy, and share a son.

By all traditional measurements, she’s living a good life.

And then it happens. Like history’s most serious joke told with the promise of an unforeseeable punchline, “The Sinner” aims to suck you in with a simple question while teasing a magnificent answer. “It’s crazy, man,” one cop says after arriving at the scene of the crime. “She just seemed so normal. Just a mom with her kid.”

But she’s not “just a mom,” and she might not be crazy. While much of the first hour is spent ruling out traditional rationales — a mental disorder, secret relationship, monetary influences — it’s clear “The Sinner” wants to tell a story beyond what’s expected. Cora goes in and out of a dreamlike state, triggered by something unknown. When she’s having sex with her husband, floating out in the water, or listening to a song, she’ll drift off, a blank look on her face, and a patterned image appearing onscreen.

But she’s not out of it. She remembers what happens when she appears to be in a trance, and she remembers the murder, be it with some difficulty. After willingly being taken to jail, Cora does what’s asked of her, willing to accept whatever punishment is doled out even though she’s not happy about it. Of course, there’s an overly invested and suspiciously determined cop who’s looking for answers. What seems like an open and shut case isn’t, even with all those witnesses on the beach, and we’re bound to get to the bottom of it all thanks to Detective Ambrose’s hard work (Pullman).

READ MORE: How a Bunch of Guys Made a Movie About Teenage Female Sexuality

“The Sinner” suffers a bit from these kind of cliches. A cop living on the edge is Cora’s only hope. Suspicious characters lurk in the background. Pertinent details are kept secret for stylistic purposes. But there are hints at genuine depth, as well. A group of male cops tick off a list of why women kill people, and the show seems determined to discard Cora’s reaction as inexplicably “emotional” — a sexist term when used to explain confusing female behavior. Could there be an allegory at play here? Might Cora represent years of female oppression? Did she stab that man for hidden specific reasons but also because men are figuratively the worst? Perhaps “The Sinner” can subvert more stereotypes than it embraces.

Given this, Biel’s committed, evocative turn, and the sure-handed direction of Antonio Campos (“Christine”), our interest is piqued enough to dig deeper. The thriller already flipped convention, asking us to care more about the “why” than the “how” and “who” in a murder non-mystery, meaning its greatest sin would be overselling. That we can live with, especially in a quick eight episodes.

“The Sinner” debuted at the 2017 Tribeca Film Festival. Its television premiere is set for Wednesday, August 2 at 10 p.m. on USA Network.

This Article is related to: Television and tagged Jessica Biel, The Sinner, TV Reviews