From up-and-coming directors to new platforms for content, this year's festival is packed with new names on the rise. 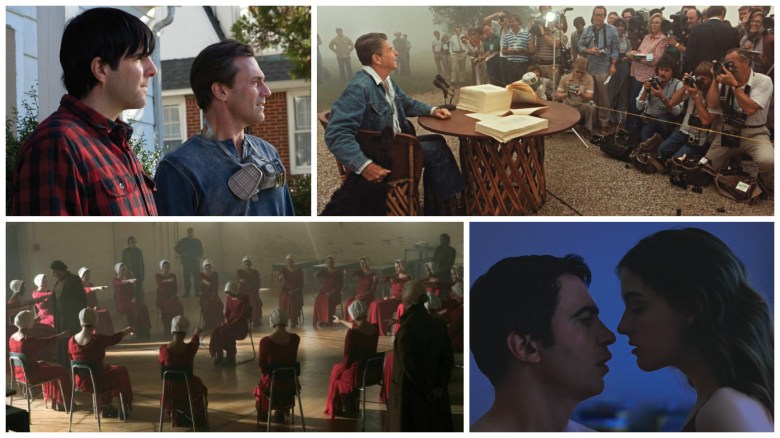 Every festival offers up the possibility of discovering something new — new stars, new films, new shows, new platforms — and this year’s Tribeca Film Festival is no different. Now in its sixteenth year, the New York City-set festival continues to grow and change, while constantly embracing what’s new and what’s next. The 2017 edition of the festival includes plenty of rising names to get excited about, from writers and directors to actors and actual platforms for hot content delivery. Who’s going to change the industry in the coming years? We’ve got some ideas.

This year’s Tribeca Film Festival takes place April 19 – 30. Check out some of the hottest breakouts to watch out for at the fest.

Not much is known about Brian Shoaf, whose IMDb page is currently topped with a credit as “Male Recording Studio Backup Singer” in an episode of the canceled HBO show “Vinyl,” but that’s about to change in a big way. An accomplished playwright who won the prestigious Sidney Sheldon Scholarship Award when he graduated from UCLA in 2007, Shoaf may be new to the film world, his first feature-length effort has managed to attract the kind of talent that a veteran filmmaker would kill for. Written and directed by Shoaf, “Aardvark” stars Jenny Slate as Emily, a therapist whose newest patient (Zachary Quinto) is starting to have increasingly intense hallucinations. His TV star brother (Jon Hamm), however, is as real as it gets, and he’s about to cause all sorts of trouble when he comes back home, meets Emily, and mixes things up for everyone involved. Boasting a team of producers that includes some of the people responsible for stellar indies like “Landline” and “A Most Violent Year,” the off-kilter  “Aardvark” promises to be one of the most exciting debuts at Tribeca. -David Ehrlich As a cinematographer, Reed Morano is well-established in the independent film world, but just wait until you see what she was able to achieve as the director of Hulu’s upcoming adaptation of “The Handmaid’s Tale.” Helming the first three episodes, Morano brings Margaret Atwood’s nightmarish dystopia to life with beauty and grace — it’s jaw-dropping, haunting work. Everyone involved with “Handmaid,” from showrunner Bruce Miller to star Elisabeth Moss, should be proud of their remarkable achievement. But Morano’s work is the very definition of breakout, and while the presence of television on the festival circuit is still an odd thing, the show transcends genre. -Liz Shannon Miller

The business of comedy has been in the zeitgeist lately, ranging from CNN’s “The History of Comedy” documentary series and Showtime’s stand-up drama “I”m Dying Up Here” to HBO’s “Crashing,” and now Seeso is entering the fray. The streaming service’s newest original series “There’s… Johnny!” takes a fictional behind-the-scenes look at one of the most popular and influential institutions of the’70s: “The Tonight Show Starring” Johnny Carson.” While the premise for the eight-part comedy is intriguing in itself, the show treats its subject seriously and will use archival footage to enhance the story of 19-year-old Nebraskan Andy Klavin who lands a gig as a gofer on “The Tonight Show.” Paul Reiser wrote and created the series that stars Tony Danza, Jane Levy, Roger Bart and Ian Nelson as Andy. Although Seeso has some name recognition with Dan Harmon’s “HarmonQuest” and the critically acclaimed sitcom “Take My Wife,” its latest original series could earn new subscribers. -Hanh Nguyen Pettengill has been the archivist and researcher behind the scenes of a number of our favorite films — including “20th Century Women,” “Gimme Danger,” “Kate Plays Christine” and “Teenage” — so she was a natural person for Pacho Velez (“Manakamana”) to turn to help craft 2,000 hours of footage in the Ronald Reagan archive into a feature-length doc. The ambitious project, like many other great upcoming films in 2017, highlights the exciting ways nonfiction filmmakers are taking footage that is traditionally considered supporting B-Roll and turning it into the text itself. Pettengill and Velez have created a completely original lens of how to view Reagan, the Presidency and our media by making something that is familiar and traditional, while at the same time groundbreaking. -Chris O’Falt

Chances are good that James Adomian is one of your favorite comedian’s favorite comedians. Long one of the best impressionists in the business (his pair of recent appearances as Sebastian Gorka on Chapo Trap House are works of art), it was just a matter of time before that understanding of character translated to a film role. As one of three family members left reeling in the wake of the father’s death (alongside Andie MacDowell and Chris O’Dowd), here’s hoping that Russell Harbaugh’s “Love After Love” will give Adomian a chance to find similar success in the indie film world. -Steve Greene

Chicago native Joey Morgan landed his first film role as Augie Foster in Paramount Pictures’ 2015 action-comedy, “Scouts Guide to the Zombie Apocalypse.” From there he segued into another starring role in the 2016 action-comedy “Compadres,” from Lionsgate and Pantelion Films. Morgan tackles much more dramatic subject matter as a troubled, fresh-out-of-rehab teenager in Max Winkler’s dark comedy “Flower.” In the film, Morgan’s character Luke gets caught up in an elaborate scheme concocted by the conniving Erica (Zoey Deutch). He can next be seen in the indie comedies “Camp Manna” and “Sierra Burgess Is a Loser.” -Graham Winfrey Some kids go to college. Some kids make movies. Shephard opted for the latter route, using her college fund to finance her directorial debut — which she also wrote, produced, edited and starred in, no pressure here — which pulls directly from the Arthur Miller play “The Crucible” in service of a modern retelling of the classic story of lust and desire (and just, like, huge mistakes). Shephard was actually inspired to write the film after she played mean girl supreme Abigail Williams in a high school production of the story, twisting the tale to fit into a present-day high school setting, complete with its own horrific repercussions and insightful jabs at what it means to be a girl on the cusp of womanhood. Her script was a finalist for the 2014 Sundance Screenwriter’s Lab, and Shephard eventually lensed the feature in her own hometown in the summer of 2015. Not too shabby. -Kate Erbland

It’s pronounced “Geth-erd,” not the other thing, though the man himself can share some hilarious horror stories about how many people have made that mistake. A fixture at Manhattan’s Upright Citizens Brigade since 2000, comedy fans have fallen for his brazenly offbeat brand of personal humor since the early days of his bizarre public access talk show, “The Chris Gethard Show,” which transferred to Fusion in 2015. “Broad City” fans may know him as Ilana’s uptight boss, but the Tribeca debut of his filmed one man show, “Chris Gethard: Career Suicide,” will introduce him as a masterful comedic storyteller along the lines of Mike Birbiglia, with the capacity to turn darkness into humor like the best Louis C.K. bits. Gethard has been workshopping this deeply personal show for a few years, and he bravely turns his struggles with mental illness, alcoholism and depression into a hilarious and at times heartbreaking exploration of the difficulty of being alive. Cathartic for those who relate, and enlightening for those less familiar, “Career Suicide” will surely be entertaining for all. -Jude Dry