96% of WGA members voted in favor of strike authorization. 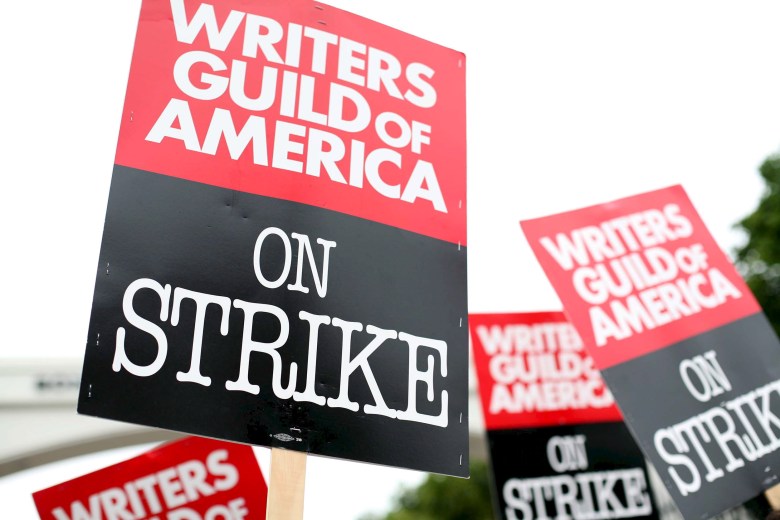 The vote gives the WGA’s negotiating committee the authorization to call a strike as soon as May 2; the guild’s current Minimum Basic Agreement with the Association of Motion Picture and Television Producers expires at midnight on May 1.

Negotiations between the WGA and AMPTP were put on hold as WGA members voted on strike authorization. Now, the two sides are set to meet up on Tuesday at the AMPTP’s Sherman Oaks offices in order to hammer out a deal. Insiders appear optimistic that an agreement can be reached within the next six days; but if there’s not a deal by then, there’s also a feeling that a strike could be called immediately. Such a move would not only send a statement to the producers, but also disrupt the broadcast network upfront presentations, held the week of May 15.

READ MORE: Writers Guild Negotiations: If Talk Shows Go Dark, Donald Trump Could Be The Biggest Winner in a Strike

A strike would also immediately shut down the late night talk shows, which rely on daily writing.

The general consensus in Hollywood is that no one is eager for a strike, given the devastating effects of the 100-day strike ten years ago that not only crippled the 2007-08 television season but cost the industry billions of dollars in lost revenue. At the same time, the issues being brought up by both the WGA and the AMPTP are even more complicated and difficult to parse than they were 10 years ago.

“We thank you for your resolve and your faith in us as your representatives,” the WGA’s negotiating committee told members as it released the results. “We are determined to achieve a fair contract.”

Not only are writers adjusting to shorter seasons, in which they are now paid for 13 episodes or less, but the WGA’s healthcare fund is rapidly losing money and in need of more cash infusion from the studios. “Writers in the 1960s struck to establish these benefits,” the WGA said in a statement. “Protecting them is a key goal of the Guild. In this negotiation, we don’t seek a better health plan, only a solvent one.”

Producers, meanwhile, are struggling to adapt to new technologies, alternative delivery systems and a fractured audience. “The companies are committed to reaching a deal at the bargaining table that keeps the industry working,” said an AMPTP statement. “The 2007 Writers Strike hurt everyone. Writers lost more than $287 million in compensation that was never recovered, deals were cancelled, and many writers took out strike loans to make ends meet. We remain focused on our objective of reaching a deal with the WGA at the bargaining table when the guild returns on April 25th.”