From writer/director Sophie Brooks comes an unfunny comedy about a girl who accidentally moves in to her ex-boyfriend's building. 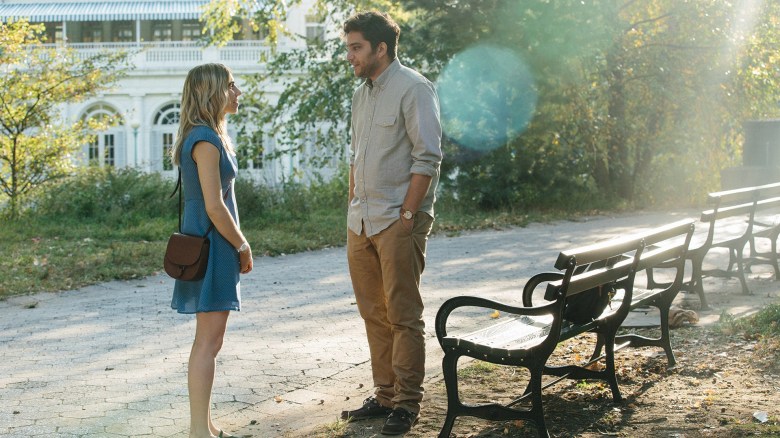 One of the more high-class problems is struggling to break free of an iconic role that made you a star in the first place. Such is the challenge facing Zosia Mamet, whom most people know only as the high-strung Shoshanna on HBO’s “Girls.” If Shoshanna was the Miranda of her day (as many have said when comparing “Girls” to its predecessor, “Sex and the City”), Mamet has the best chance of the “Girls” crew to have a lasting career. Tony winner Cynthia Nixon, who played Miranda, lands plum film roles such as Emily Dickinson in Terence Davies’ “A Quiet Passion,” and is currently starring on Broadway opposite Laura Linney in the revival of Lillian Hellman’s “Little Foxes.” However, if Mamet aspires to such heights, she must choose better projects than “The Boy Downstairs.”

The debut feature from writer/director Sophie Brooks, “The Boy Downstairs” grinds a smart concept and structure into the ground with inconsequential results. Mamet plays Diana, an aspiring writer who has recently returned to New York from a graduate program in London. After moving into her dream apartment in a charming Brooklyn brownstone, Diana is shocked to find the name of her teddy bear of an ex boyfriend, Ben (Matthew Shear), on the mailbox of the basement apartment.

Her awkward attempts to befriend him don’t go so well, as Ben is clearly not as amused as she is by the unfortunate coincidence. Advising Diana are her widowed landlady, Amy (Deirdre O’Connell), and her sketch of a best friend, Gabby (Diana Irvine). Amy used to be an actress, and urges Diana to go for her dreams, while Gabby is either looking for casual sex or a boyfriend; she doesn’t really know, and neither does the movie. The plot hits all of its notes via flashbacks; the film opens with Ben and Diana’s final tearful goodbye, and chronicles their six-month courtship from would-be charming gallery dates and trips upstate to meet the parents.

“The Boy Downstairs” is best when Brooks juxtaposes the devolution of the first relationship with its potential rekindling. Just as Diana breaks younger Ben’s heart, the pair have an impromptu date at “a great Italian place just around the corner.” (If Brooks is actively courting cliche, she does it well.)

Though Brooks exhibits a command of storytelling structure, “The Boy Downstairs” suffers from an utter lack of point of view and comedic voice. Billed as a comedy, the only people laughing are the characters, at themselves. Witty banter isn’t the mention of LSD, nor is comedy making a character do aerobics with their landlady. Shear squeezes more charm out of his character than Mamet, though she has the harder task. Noah Baumbach fans will recognize Shear from “Mistress America,” co-written by Greta Gerwig, and he will soon appear in Baumbach’s Cannes-bound “The Meyerowitz Stories” and Wes Anderson’s “Isle of Dogs.” Shear’s puppy-dog demeanor and unconventional good looks are a bright spot.

READ MORE: How a 20-Year-Old Filmmaker Wrote, Directed and Starred In Her Feature Directorial Debut — Tribeca 2017

While both are talented actors, Brooks did herself no favors by their casting as it invites comparison to Dunham, Baumbach, and Gerwig. Unfortunately, “The Boy Downstairs” only shares the most tiring and directionless parts suggested by that trio, and none of their humorous charm or tortured soul. In the only thing that could pass for a moment of reckoning, Diana tells Amy through sobs: “I don’t know what I’m doing.” Not only do Dunham, Gerwig, and Baumbach know how to make their existential crises funny, but you also believe in their pain.

Mamet does prove one thing about “Girls”: Dunham is a much better writer than people give her credit. Without a clearly drawn character, Mamet is lost onscreen. As the daughter of David Mamet, arguably the greatest living American playwright, she should have known: An actor is nothing without good material.

“The Boy Downstairs” premiered at the 2017 Tribeca Film Festival.

This Article is related to: Film and tagged 2017 Tribeca, Film Reviews, Zosia Mamet