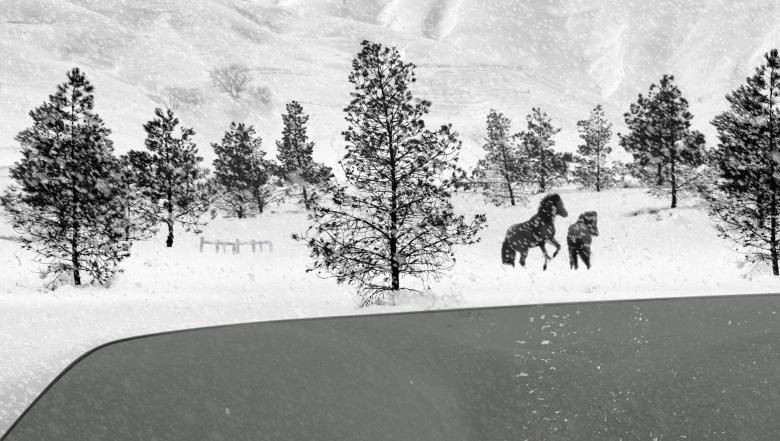 Abbas Kiarostami, the great Iranian postmodernist who died last summer at the age of 76, used to say that he preferred the kind of movies that put their audience to sleep. “Some films have made me doze off in the theater,” he would explain, “but the same films have made me stay up at night, wake up thinking about them in the morning, and keep on thinking about them for for weeks.” So while I passed out (and passed out hard) roughly 15 minutes into “24 Frames,” the fascinating, posthumously completed non-narrative project that will serve as Kiarostami’s final farewell, I suspect that he wouldn’t take my unconsciousness as a criticism or a show of disrespect.

On the contrary, I imagine that he would have been delighted to see the dozens of nodding heads that dotted the film’s final Cannes screening, where the narcotic quality of Kiarostami’s cinema was compounded by the sheer exhaustion of simply coming to see it. He would have loved the low rumble of snores that filled the auditorium in surround sound. To some extent, he might have even appreciated the steady stream of walk-outs, or my decision to take a short walk halfway through and then watch the rest of the film while standing at the back of the room.

There’s no doubt that “24 Frames” is best experienced with eyes open, but, like just about all of Kiarostami’s work, it thrives in the rift between dreams and waking life, between artifice and reality; it movingly illustrates how cinema’s true power is not to identify that divide, but rather to erase it. From the self-reflexiveness meta-narrative of “Close-Up” (this writer’s favorite film) to the romantic gamesmanship of “Like Someone in Love” and the mysterious dislocation of “Through the Olive Trees,” Kiarostami has always displayed a profound interest in disjoining the bonds that handcuff our view of the world. He was preoccupied with divorcing people from their bodies, bodies from the images, images from their sound, and all of the above from the paralytic myopia of time.

His films were never real or imagined, and seldom easily classifiable as documentary or fiction — they were at once both and neither. Even his most outwardly conventional dramas would refuse to pick a side; in “Certified Copy,” the story doesn’t end when viewers discover whether Juliette Binoche and William Shimell are actually married or not, it ends when they understand how they can be married and not. Kiarostami corrupted the tyranny of time and space, he dissolved the wall that separates present and past. He made Schrödinger’s cinema, and — as “24 Frames” so poignantly confirms — he is both dead and alive, as all great artists will always be. But yeah, it’s still one hell of an endurance test. Arguably better suited as a museum installation than as a theatrical experience (the context of the former might help encourage people to engage with the project on Kiarostami’s terms), “24 Frames” consists of 24 four-and-a-half-minute segments in which the filmmaker, inspired by his lifelong fascination with the time just before and after a still image has been captured, uses green screen technology to temporally expand upon some of the photographs that he took over the course of his life.

The only exception to this approach is the first of these Frames, in which Kiarostami lucidly illustrates his method by applying it to Peter Bruegel’s “The Hunters in the Snow.” The first thing we see is the painting itself, as recognizable from art history textbooks as it is from Andrei Tarkovsky’s “Solaris.” But then, after a minute or so, the canvas comes to life. Plumes of smoke begin to huff out of a chimney. The crows in the sky above the winter landscape begin to caw. A dog barks. For the rest of the film, Kiarostami applies the same magical technique to non-illustrated images of his own, drawing in falling snow, animating a lion so that it humps its mate, compositing shadows and sounds into places where they may never have existed. Some of the effects are a little squiggly, others are absolutely seamless. But while only a very small number of the photographs include any people in the frame, there’s still something intensely intimate about each and every one of them, Kiarostami guiding us through a tour of his personal history, one foot planted in memory and the other in imagination.

Seen in a vacuum, it would be difficult to assign much value to these seemingly mundane vignettes. For one thing, only in the Bruegel frame is it possible to pinpoint the original image that Kiarostami is manipulating; with the photographs, the divide between fact and invention is characteristically unclear. For another, “24 Frames” shies away from telling linear stories, even during an encounter between two quacking ducks who seem ready to star in their own Pixar short. A horse is trotting through the snow. A shadow is creeping across the opening in a stone wall. A bird is sitting on the outside of a window, its silhouette traced against the other side of the blind. In one Frame, an unseen hunter snipes a seagull out of the sky; the other seagulls scatter for a minute before eventually regrouping above the beach. The sequence was supposedly inspired by a personal tragedy that Kiarostami once suffered, but viewers have no way of knowing that.

Are we meant to infer from “24 Frames,” the title of which references the frames per second at which film is usually projected, that moving pictures are inherently more interesting than still ones? That more data is always preferable? I don’t think so. As Kiarostami was always fond of saying: “Information is its own kind of pornography.” Besides, Kiarostami’s cinema has always pointed beyond the limits of his lens, his use of plot and composition has always been geared towards using the visible to highlight the invisible, presence to give shape to absence. Even if he expanded his images were expanded for 40 minutes in either direction, each one long enough to count as its own feature, its duration would still occupy a tiny blip in an infinite continuum of time. In an age where people are so preoccupied with the size of the screen on which we watch things, it’s fitting that Kiarostami’s final work reminds us that no screen is too small, and that no screen is ever big enough.

And, in the end, patience is a virtue. After walking back into the theater to shift and stir through the final five tableaux, I was rewarded with a beguiling experience that doubles as a perfect — and perfectly self-reflexive — tribute to the defining pursuits of Abbas Kiarostami’s working life. In stark contrast to the rustic quality of the previous 23 Frames, the 24th presents a monochrome shot of a woman sitting at her desk, her iMac humming to keep pace with the film editing software with which she’s tweaking an old Hollywood romance. As the woman slumps forward, taking a work-induced catnap, the footage on her computer screen begins to move. On her monitor, a screen within a screen, the actors begin stuttering to life, the man and woman inching their mouths closer. They kiss. A spark of color. “The End.” The person in the Frame is oblivious, but the people in the audience are rapt; It’s an incredible sight, an enchanted reminder that images survive for as long as someone is there to see them.

So what of the unconscious girl, there but not present, who misses out on a great filmmaker’s dying flare of genius? She’s just one last person who Kiarostami had the satisfaction of putting to sleep.

“24 Frames” premiered as a Special Screening at the 2017 Cannes Film Festival.

This Article is related to: Film and tagged 24 frames, Abbas Kiarostami, Cannes, Reviews