If you look beyond the dick jokes, "Baywatch" is actually pretty fun. 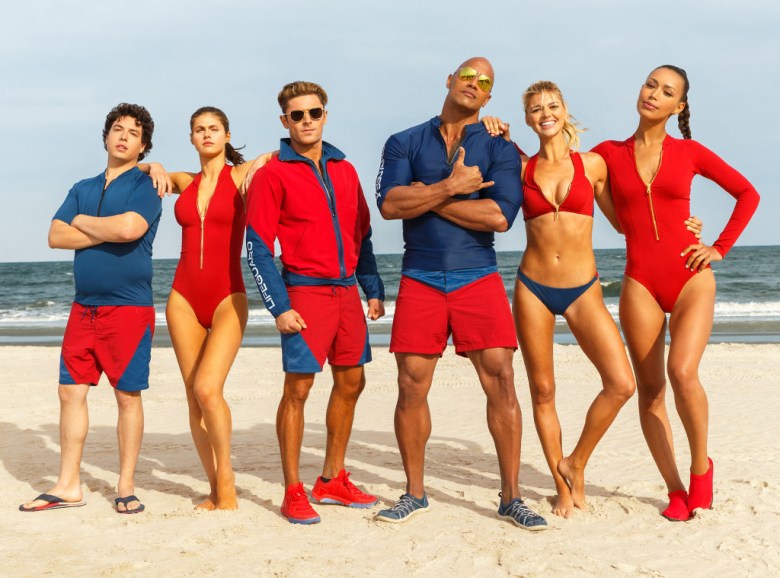 You have to hand it to Dwayne “The Rock” Johnson: The man knows how to have a good time. Through an elaborate fireworks display used to blow off a human foot, or an “American Ninja Warrior”-style standoff with a veiny Zac Efron (he wins), the Rock commands a movie screen with a tranquil sheen that’s as smooth and shiny as the skin on his head. Taking over for David Hasselhoff as lifeguard Mitch Buchannon, he is comfortable commandeering jet-skis, diving into ocean fires, and bulldozing bad guys without breaking a sweat.

Rebooted and remade, TV-to feature projects can range from the funny “21 Jump Street” to the offensively unfunny “CHIPS.” With its strong ensemble, quick pace, and equal opportunity eye candy, “Baywatch” tips the scales heavily toward the former. If it weren’t for all the dick jokes and gags, “Baywatch”  would be home free. But then, there wouldn’t be much movie left. A Ryan Lochte ringer, Brody was disgraced when his partying antics lost his relay team the gold medal because he threw up in the pool. Now, he’s looking to rehabilitate his image with a little community service. He makes the cut, along with fellow recruits Summer (Alexandra Daddario) and Ronnie (the hilarious Jon Bass). But Brody never drops the ‘tude, challenging Mitch throughout, with Mitch hurling nicknames at Brody in one of the film’s funnier recurring jokes. (Names Mitch calls Brody: One Direction, New Kids on the Block, Bieber, and of course, “High School Musical”).

Brody’s main gripe with Mitch? He wishes he would just act like a lifeguard and quit trying to uncover the nefarious drug ring taking over his beloved beach. A gorgeous mogul, Victoria Leeds (Priyanka Chopra), is opening a hot new club on the beach, and little kids are finding dime bags of flakka washing up onshore. (Flakka is a crystallized drug comparable to psychoactive bath salts.) Mitch takes it upon himself and his team to investigate, and action-comedy hijinks ensue. These include Ronnie twerking as a diversionary tactic, Brody dripping with melted cadaver body fat while hiding out in a morgue, and Mitch tricking Brody into lifting a dead man’s scrotum in order to check on the state of his taint.

These gags are integral to the script, written by the team of seven credited writers (all men); the overkill comes from the many offhand dick/ball/mangina jokes that may or may not have been improvised. With accomplished comedic actors such as Rob Huebel (“Children’s Hospital”), Hannibal Buress (“Broad City”), and Bass (a versatile comedic actor who got his start on Broadway replacing Josh Gad in “The Book of Mormon”), it’s easy to see why Johnson and Efron thought they could riff with the big boys. In outtakes that play as the credits roll, it’s clear that the juvenile sense of humor was not confined to the writers’ room. Bass, bless his heart, carries the weight of many of the movie’s worst offenders. An early scene has him inconveniently aroused in front of the object of his affection, CJ, when he flops down onto a beach chair to mask his shame and becomes lodged in between the slats of the chair. Later, he is caught singing naked in the shower. He’s — quite literally — the butt of many jokes. In contrast to the gorgeous humans running in slow motion before him, he rocks his neoprene T-shirt like a champ. A comedic force in the grand tradition of Seth Rogen or Jonah Hill, Bass is the breakout of “Baywatch.”

READ MORE: ‘Saturday Night Live’ Review: One Dwayne Johnson To Rule Us All

There are some incongruities, like when Ronnie remains pretty calm when faced with photos of his dismembered friend. Victoria as a villain has about as much oomph as the barrel of fish she uses to smuggle her drugs. Nothing against Chopra; it’s as if the writers were so pleased with themselves for writing a female villain they forgot to give her a personality. In fact, the female characters, though at least there are four of them, are not memorable save for some fairly… broad traits.

However, the premise is surprisingly ripe for a revamp; something about the blow-up floaties, the water rescues, and the red suits just screams summer blockbuster. “Baywatch” won’t blow anything out of the water (except for the boat it sets on fire), but it will certainly make a splash.

“Baywatch” opens in theaters on May 25.

This Article is related to: Film and tagged Baywatch, Dwayne "The Rock" Johnson, Reviews, Zac Efron