The wrestling champ has blossomed into American cinema's biggest action star — here's how he got there. 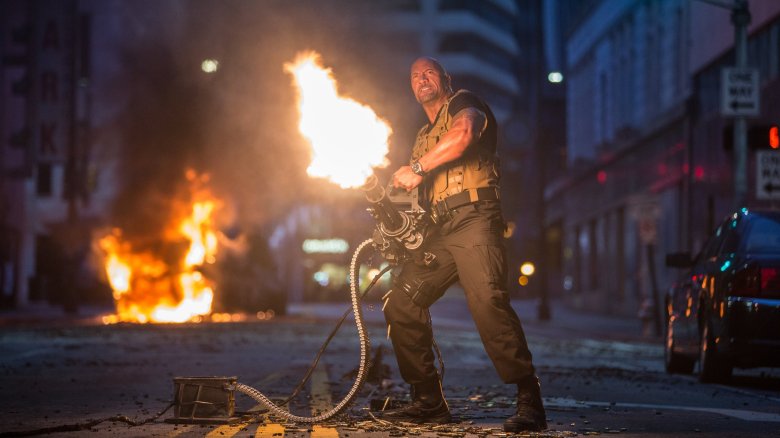 Like most famous people, Dwayne Johnson’s Wikipedia page includes a nifty sidebar that includes bare bones facts, like birthday and age, with a couple of lines reserved for “occupation.” Johnson’s “occupation” line is almost amusingly slim — it simply reads, “Actor, producer, singer, professional wrestler,” which is an understated way of saying “this guy does a lot.” And it doesn’t even mention his best-selling memoir, or his charity work, and “professional wrestler” hardly indicates the tremendous success he’s had in the ring.

And “actor”? That’s a very concise tribute to his blockbuster career on the big screen, one that’s amounted to dozens of credits and an estimated lifetime box office gross (domestic only!) that totals over $2.7 billion. With Johnson toplining the early summer’s biggest hit so far, the box office-dominating “Fate of the Furious” and a non-stop barrage of other features on the way, Johnson has become the industry’s biggest, most bankable star. And he shows no signs of letting up just yet.

Johnson is a star, and perhaps Hollywood’s brightest in the action arena — not to mention his TV turns, including the HBO series “Ballers” and a slew of hosting gigs, along with some hard-hitting true-life offerings, like “The Hero” and “Rock and a Hard Place” — and he’s gotten there through hard work and a canny ability to pick mass-appealing roles, no matter the genre. Here are his secrets to success.

Playing Himself (Sort Of)

Johnson’s earliest turns outside the ring played up on his wrestling persona, all the better to amuse built-in fans and clue newbies into what he was about (or, perhaps more appropriately, what he was cooking). His first on-screen credit was a bit part on “That ’70s Show,” where he played his own father on a 1999 episode called “That Wrestling Show.” A year later, he was back on the small screen with a role on “Star Trek: Voyager,” playing — of all things! — an alien wrestler who took on Seven of Nine. It wasn’t the splashiest of starts, but it set Johnson up for attention beyond his usual fanbase.

While his early roles leaned hard on his wrestling persona (big, braggadocious) over actual acting chops, his charm was clear from the start. A fresh talent who had already cultivated admirers in the athletic realm, Johnson’s greatest asset was an appeal the transcended the ring, and even when he was riffing on his The Rock, he made a case for other people to watch.

Doubling Down on Action

By 2001, Johnson was ready for big screen superstardom, which initially came care of a supporting turn in “The Mummy Returns,” introducing Johnson (then still credited as “The Rock”) as the buckwild baddie The Scorpion King, a character compelling (and bankable) enough to get his very own spinoff just one year after his big screen debut. (Johnson was infamously paid $5.5 million for the role, a record-setting paycheck for an actor in his first starring role). Johnson didn’t rest on his laurels after the success of the “Mummy” features (total box office take for the pair: nearly $600 million worldwide), instead opting to lean into his new status as an action star to reckon with, a real athlete who could be physically impressive in the kind of roles that required it. The early aughts were marked with more muscle-bound offerings, including the action-comedy “The Rundown” (which also showed off Johnson’s charisma in a fresh way), 2004’s “Walking Tall” remake, and a supporting role in the space action vehicle “Doom.”

Although none of those early features amounted to box office big bucks — and both “Walking Tall” and “Doom” were critical misfires — they showed off a burgeoning range to Johnson’s roles. Peter Berg’s “The Rundown” has even undergone a bit of a critical reappraisal, and rumors of sequels continue to pop up.

But even as Johnson picked up a steady stream of roles that seemed tailor-made for him, he began to exhibit a real desire to do some majorly out of the box work with ambitious directors. There’s no other outlier on his stacked resume quite like that of his turn in Richard Kelly’s critically maligned and unfathomably unique “Southland Tales,” where Johnson plays a former action star who gets mixed up with the Kelly’s wild, dystopian vision (and that’s the short version).

The role was a self-reflective gamble, amusingly placed in a movie that was all about the dangers of the future and the promise of a world without limits. The film was notoriously booed at Cannes and never quite bounced back when it was released in 2007, but it served one purpose — casting Johnson’s cinematic appeal in an entirely new light. (The film is still Johnson’s lowest theatrical earner, and the only one of two films to not crack at least $20 million domestically.) While Johnson hasn’t played things quite that fast and loose since “Southland,” he’s still occasionally found time to work with other singular directors, including a small role for Tyler Perry on his “Why Did I Get Married Too?” and a deliriously fun turn in Michael Bay’s most interesting film (no contest), the dumb bunny bodybuilder heist feature “Pain & Gain.” If there’s one thing Johnson could stand to do more of as he continues his rise to the top of the box office, it’s make time for more work like the kind he fostered in “Southland” and “Pain.”

Johnson has always been charming, but his movie career eventually found a way to turn that charm into comedic gold. Early forays into amusing offerings, like small parts in the “Get Smart” movie and even a supporting role in the “Reno 911!” feature, slowly pushed Johnson into an unexpected genre: comedy. His recurring “Saturday Night Live” character, The Rock Obama, tapped into Johnson’s good humor and brought it to a more national stage, while his recent team-up with Kevin Hart in last year’s “Central Intelligence” proved that he could carry a laugh-heavy feature (the film made over $216 million worldwide, and ended on a note that screamed “sequel!”).

Johnson may be Hollywood’s biggest action star, but he’s also got the ability to team up with comedic powerhouses and still deliver the goods. “Central Intelligence” may have been just okay, but the possibility of further team-ups with Hart made it more than worth the price of admission. (The pair will star together in this summer’s “Jumanji,” so the love affair continues.)

Johnson has seemingly not lost his ability to laugh at himself, and both his Rock Obama persona and his role in “Central Intelligence” play up his beefiness as something to laugh as part of his comedic skills. “Central Intelligence” amusingly cast Johnson as a former high school dork turned secret agent, a muscle-bound badass who still struggles with feelings of inadequacy. That juxtaposition is both funny and just kind of sweet.

Johnson is also the rare action star who can deliver some wholesome entertainment, and many of his earliest starring roles focused on delivering films suitable for the entire family, from feel-good sports offerings like “Gridiron Gang” and “The Game Plan” to warm-and-fuzzy features like “Tooth Fairy” and “Race to Witch Mountain.” Suddenly, Johnson wasn’t just some action star, he was a relatable, fun dude that even the kids cared about.

How well has appealing to kids gone over for Johnson? Well, he got slimed at the 2009 Kids Choice Awards alongside the Jonas Brothers, and it’s hard to imagine a bigger stamp of “hey, kids love you” approval than getting slimed with the Jonas Brothers. If you’re looking for a star with four-quadrent reach, that’s Johnson.

Courtesy of iN DEMAND

Despite his recent uptick in still more action-heavy films, Johnson hasn’t abandoned his younger fanbase, thanks to his family-friendly “Journey” franchise and his amusing turn in “Moana” (where he also sang, because that’s just Johnson). Johnson’s big “Moana” banger, “You’re Welcome,” trades on the dichotomy that enhances his humor: a fearsome warrior who hams it up in service to getting kudos for basically just being good at everything.

His character, the demigod Maui, is totally stuck on himself, and his early lack of self-awareness plays terrifically off self-assured princess Moana, who doesn’t need him and never will. Being physically powerful only gets Maui so far, and “Moana” is as much a coming-of-age tale for his character as it is Moana. As ever, Johnson is comfortable playing with his own persona, even in animated form.

Ahead, Johnson goes all in on franchise features and looks to the future.

Page 1 of 2
Continue Reading: Dwayne Johnson Isn’t Your Average Superstar: How The Rock Has Built a Career With Smart Choices

This Article is related to: Film and tagged Dwayne Johnson, The Rock