No self-respecting trans guy would leave the house looking like this. 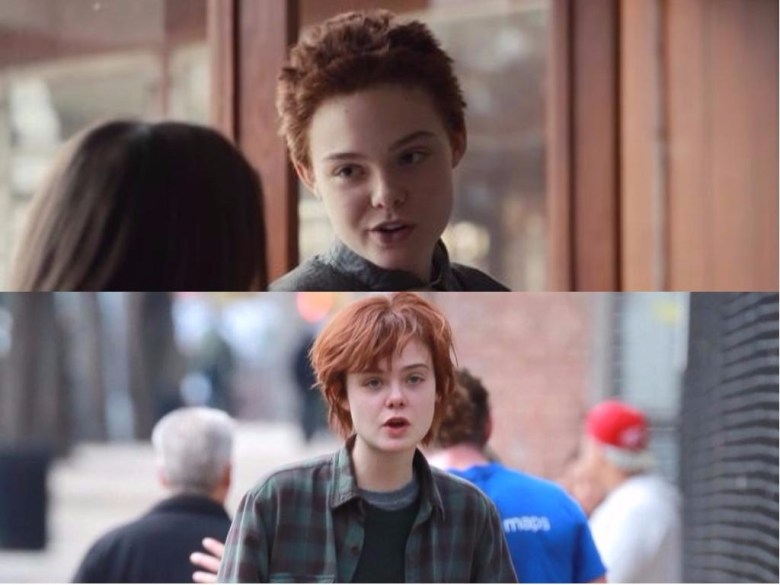 The Weinstein Company, and Harvey Weinstein in particular, is notorious for using unconventional tactics to promote its films; he flew Daniel Day-Lewis to D.C. to support the Americans with Disabilities Act during the Oscar campaign for “My Left Foot,” and paraded Martin Scorsese around at a Women In Film luncheon to prove “Gangs of New York” wasn’t too violent.

While “3 Generations” likely won’t be earning Oscar noms, Weinstein did score (orchestrate?) a flurry of good press when the MPAA gave the transgender drama an R rating, citing language and sexual references in its decision. GLAAD sent the MPAA an angry letter; Naomi Watts gave an impassioned statement about the “beautiful and touching story,” and the MPAA changed the rating to PG-13. And for one brief and shining moment, nobody talked about how awful the movie was. (Current Rotten Tomatoes: 35%.)

Suddenly, a dud that had been in limbo for two years, confusingly changed its title from the vague “About Ray” to the clunky “3 Generations,” and received criticism for casting a cisgender actress as a trans boy, was the epitome of acceptance. “3 Generations” was the little guy (or person) fighting the good fight, standing up to the hetero-patriarchy, spreading the gospel about trans justice. That is, until people actually saw the thing. “3 Generations” was directed by Gaby Dellal, who co-wrote the script with playwright Nikole Beckwith. It is about a boy named Ray (Elle Fanning), who was born Ramona. Ray lives in an implausibly enormous New York townhouse with his mother, Maggie (Naomi Watts); grandmother, Dolly (Susan Sarandon); and Dolly’s partner, Frances (Linda Emond). Despite being a lesbian, Dolly still has a hard time honoring Ray’s gender identity, which is actually one of the movie’s more accurate points. Dolly still uses “she” pronouns for Ray, and asks questions like, “Why can’t she just be a lesbian?”

Though Maggie is supportive, her true feelings start to show when Ray’s doctor hands her a consent form so Ray can begin taking testosterone. She also hasn’t spoken to Ray’s father in years (Tate Donovan), and maybe sort of feels like he needs to sign it (she considers forging his signature, lowering the stakes significantly for no apparent reason). Thus begins a meandering goose chase that forces Maggie to confront her past mistakes, and forces Ray to learn the surprising truth about how he came to be.

With its quirky non-sequiturs and asides, “3 Generations” feels like it’s trying to be a comedy trapped inside its melodrama. Dellal must have a penchant for architecture or design, because the movie feels hopelessly devoted to its locations; a three-story townhouse full of creaky staircases and cast-iron pans, and a super-sleek, window-filled suburban house that could pass for a Frank Lloyd Wright. In a frenzied road trip at the movie’s finale, Maggie takes Dolly’s vintage Wrangler, mumbling to herself, “Why have I been renting cars this whole time?” (Maybe because production only had the Wrangler for one day?) Like Ray’s transition, Dellal’s obsession with cool scenery feels like the markings of someone who didn’t know why they were making the movie they made. The film opens on Ray doing sit-ups in a white muscle tee, as he says in voiceover, “Every year on my birthday, I wish for the same thing. I wish I was a boy.” Sure, this is a crudely simple way to explain how trans people feel, but the prevailing thinking is that Ray already is a boy. That’s the whole point. In dark moments of self reckoning, many trans people may make a similar wish. But it probably happens more than once a year.

Ray films his workout regimens, speaking to the camera vlog-style. Though we never see a YouTube page, it’s clear he is posting these videos somewhere, and YouTube has an active trans community that similarly documents their transitions. He has stringy red hair that flops around under his beanie as he skateboards. Halfway through the film, as he prepares to confront his father, there is an obligatory dramatic head-shaving scene, resulting in a patchy and uneven buzz. It has to be a wig, because there is no way human hair could look that bad.

There’s no crime in a movie wigs. Fanning is a girl, she usually plays girls, and she probably had subsequent projects where she needed her hair to be long. However, if the studio had simply cast a trans or gender non-conforming actor instead, they probably would have been willing to cut their hair. There’s an argument that the producers needed someone pre-transition, since that fits the character. However, there are plenty of queer or gender non-conforming actors who have not taken hormones, nor do they plan to. They may not have the name recognition, but plenty of coming-of-age films made careers for unknown young actors in the past. With Watts and Sarandon to carry it, the Weinsteins could have plucked a capable trans actor from obscurity and given them a shot. And they wouldn’t have had to worry about a wig.

It comes down to this: Trans people are a historically marginalized group. When studios cast cis actors in trans roles, they are telling the very people whose story they wish to honor that they are unworthy. When a cisgender writer writes a screenplay about a trans person, they are assuming they can learn all they need to know by watching a few YouTube videos. And when nobody goes to see your movie, audiences are telling you that they can see right through your bullshit.

This Article is related to: Film and tagged 3 Generations