The inside story on how the indie director made the leap, and why star Amandla Stenberg wouldn't have been keen to do this film with a "white male." 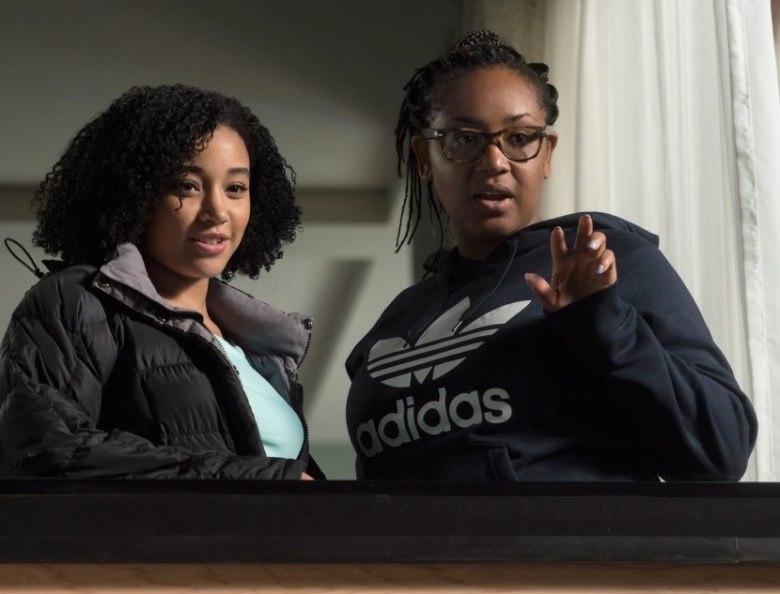 Stella Meghie and Amandla Stenberg on the set of “Everything, Everything”

“Everything, Everything” director Stella Meghie, who made her debut with the Canadian production “Jean of the Joneses,” isn’t just being modest when she says she didn’t expect to direct a studio film. The numbers tell us as much: Most female filmmakers struggle to get a second film off the ground, and the number of black female filmmakers in the studio system is vanishingly small.

In fact, Meghie is just one of 16 female filmmakers to have a studio-backed film hitting theaters in 2017 (that includes studio speciality divisions). However, it’s not Meghie who got lucky; it’s MGM and Warner Bros., since she might be the only person who could have made this movie.

“That was the reason why I did the film,” said its star, Amandla Stenberg, who was 13 when she broke out as Rue in “The Hunger Games” and frequently makes headlines for her outspoken nature, including an infamous 2015 takedown of Kendall Jenner’s cultural appropriation. “If it was directed by a white male, I don’t think I would have been nearly as excited about it.”

Adapted from Nicola Yoon’s bestselling YA novel of the same name, “Everything, Everything” follows the curious life of Maddy Whittier (Stenberg), a precocious and charming teen who also has a disease that keeps her immune system so weak that she can’t leave her hermetically sealed house. Maddy’s life is thrown into major hormonal turmoil when Olly (Nick Robinson) moves next door, and the pair strike up a friendship that turns to love. But given her predicament, what kind of relationship can Maddy have? Meghie didn’t see it coming. Although she signed with CAA soon after her independently financed family dramedy “Jean of the Joneses” debuted at SXSW 2016, and her agents immediately started sending scripts, the filmmaker said she really didn’t think it was possible.

“I was like, ‘I highly doubt I’m about to jump to a studio film,’ and I was just more thinking about financing another film that I was writing,” Meghie said.

Given that perspective, Meghie is grateful that her manager encouraged her to read J. Mills Goodloe’s script. “Ten pages in I was like, ‘Oh, this is for me, is what you’re telling me. I get it,'” she said. “I think I literally read the script [on a] Monday morning, I talked to the producers like five seconds after I finished the book. I came to LA to pitch it a week later, and then I got the job two weeks later, and then we were shooting two months later.”

It’s a fairy tale that’s hardly relatable for most filmmakers, and Meghie knows it.

“That never happens,” Meghie said. “That’s a complete rarity. It was just a strange thing where we got all the pieces together and MGM was just like, ‘Let’s do it.’”

She added, “I just know how hard it is, and you know your indie friends don’t make the jump that quickly, and I was still literally on the festival circuit. I had just premiered ‘Jean’ and I was thinking, ‘Okay, what festival are we going to go to next?'”

Moving into the studio world came with plenty of perks, including the chance to cast big names. “Amandla was like, top choice, you know? You read the book, and you can see her fitting herself into it,” Meghie said. “As soon as she read the pages, she was Maddy. She had that kind of innocence and inquisitive mind that Maddy has.”

Meghie didn’t need to worry about enticing Stenberg: The actress came to the movie for her. “When I saw that she was attached, that showed me the point of this project,” Stenberg said. “That showed me that there was an intention there and that it could be something really important in terms of what teenagers are getting to see nowadays.” Stenberg, who has increasingly used social media platforms to speak out about equality, feminism, and the industry, was excited about playing the kind of character that’s rarely seen: A multifaceted, nuanced, black teenage girl.

“That’s something that I feel like we don’t get to see as often as we should,” she said. “Honestly, not very often at all. Black teenagers experience adolescence and all the emotions that come with it too. Why shouldn’t we have movies that represent that?”

Casting the role of Maddy’s mother, Dr. Pauline Whittier, wasn’t nearly as easy for Meghie. (No spoilers, but Dr. Whittier is a complex character that requires a deft touch.)

“I would just lie awake at night thinking, ‘If we don’t cast the right person for this, this movie’s gonna be terrible,'” Meghie said. Tony-winning actress and singer Anika Noni Rose was the answer.

“She has such presence, she has such poise,” Meghie said. “There’s just an underlying warmth to it that I thought this character needed to be very, very protective and strong, but you understand that she loves her daughter and everything that she’s doing is from a place of love so that you can still have empathy for her in the end.”

Rose added, “I think that it was necessary for a woman to direct this. Could somebody else have directed this? Yes, a very special man could’ve directed it. Would there have been things that would have been different and missing? Yes.” The female-centric and communication-heavy set made for a snappy, empowering production.

“It was cast with women who very clearly know their minds,” Rose said with a laugh. “And I don’t mean the characters, I mean the women, from Amandla up. It’s a well-put-together puzzle. I feel like we were lucky to have so many ovaries on this set.”

READ MORE: ‘Everything, Everything’ Trailer: Amandla Stenberg Is Isolated from the Outside World in Stella Meghie’s New Romantic Drama

Stenberg agreed. “We knew what a special opportunity it was for us as black women to be on that set and to be creating this movie that, in many ways, is boundary-breaking,” she said. “Sometimes we felt like we were scamming our way into making a film that is much more revolutionary than it may look on the surface.”

Meghie hopes that films like “Everything, Everything,” and studios willing to take chances on rising female filmmakers like her, will begin to change the tide.

“You read the statistics and you just know, ‘Oh, I’m one of four this year, great,'” Meghie said. “The conversation is much bigger right now, which I think forces executives who are in a place of power to have to consider women and open the door and let more in, so all I can do is do as well as I can and speak out where I can. There’s just a bias that is ingrained into the industry that can change only slowly. There’s something happening.”

“Everything, Everything” is in theaters today, May 19. Watch the trailer below.

This Article is related to: Film and tagged Amandla Stenberg, Everything Everything, Girl Talk, Interviews, Stella Meghie