This is not how you welcome a Hollywood legend back to the big screen. 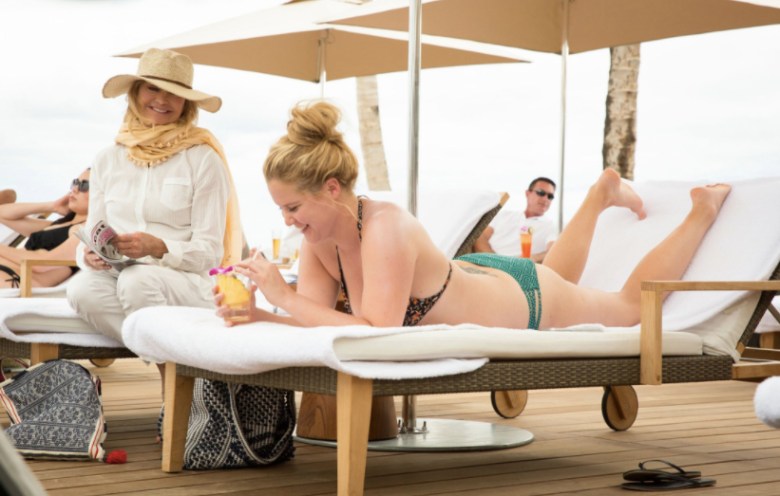 Lauded actress and boundary-busting comedian Goldie Hawn hasn’t appeared in a film in over a decade, let alone starred in one, so her return to the big screen should be considered a very big deal. Too bad that the Oscar-winning actress’ first project in 15 years isn’t just a misfire, but one that commits the unforgivable sin of not allowing Hawn to inhabit her stature as a great comedic performer. Jonathan Levine’s “Snatched” has bigger problems than just that one, but the decision to cast Hawn as a worrywart mother saddled with a woefully immature daughter (Amy Schumer) on a trip from hell is indicative of many of this limp action-comedy’s biggest sins. And there are so many.

Eschewing the kind of flinty, in-your-face charm that made her turn in 2015’s bawdy rom-com “Trainwreck” (which she both wrote and starred in) such a treat, Schumer’s role in “Snatched” lands solidly in the “unlikable” camp. Her Emily isn’t just immature, selfish, and rude (though she is all those things in spades) — she’s also obsessed with oversharing her so-called adventures to the world. While the script (written by Katie Dippold, who last wrote the amusing “Ghostbusters” reboot and is responsible for some of the best episodes of “Parks and Receration”) doesn’t dance around Emily’s inherent unlikeability — one of the film’s most amusing bits sees Emily begging her friends for help, only to be shot down for a multitude of sins, like “you owe me $300” — it also doesn’t seem entirely aware of just how disengaging it is to watch someone so appealing chew their way through an entire film.

“Snatched” picks up in the wake of Emily’s latest breakup (thanks to an underused Randall Park), a sudden affair that leaves her with a pair of nonrefundable tickets to Ecuador and a burning desire to head down south, if only to Instagram whatever adventures may befall her. With no one to go with her, Emily decides to bring along her mother Linda (Hawn), whose sole personality trait seems to be that she hates doing anything adventurous. But Emily knows differently, thanks to the discovery of a fun-filled photo album that shows Linda in her younger and more wild days (the album makes Emily nostalgic for the mom she never knew, but it will only make viewers feel sharper pains for the stellar work Hawn shored up in her own youth).

Emily’s quest to have enough fun to splash on her social media accounts is initially thwarted by her cautious mom, but things pick up considerably when she meets a handsome Brit (Tom Bateman) at the hotel bar, who is eager to show Emily the best that the country has to offer, which apparently includes lots of jungle-set capoeira parties and gallons of unknown liquor. When he invites her and her mom along for another adventure, Emily can’t resist (and, weirdly, neither can Linda, despite the fact that, again, all we know about her is she’s scared of stuff). Of course, it’s all a ruse, and Emily and Linda are soon tossed into a filthy cell where they prepare to be, well, it’s unclear. Sold into sex slavery? Murdered? Made to transport drugs? The only thing that’s clear is that some scary men from another country have got them in their grasp, and no one else on Earth is as ill-prepared for this trauma than the two of them.

After a mostly accidental escape attempt, the pair find themselves clawing through the jungle, desperate to get back to civilization. It’s possible to imagine a version of “Snatched” that uses this amusing-enough premise to cash in on all on the promise of an action-comedy, something that can blend humor with a healthy dose of danger, but Levine’s film gets away with no such luck. “Snatched” isn’t just unfunny, it’s actively so, barely attempting to make jokes and completely free of the kind of wacky setpiece that could lift the lacking narrative out of embarrassing ebbs. Schumer and Hawn exhibit only rough strokes of familial chemistry, and any moments of genuine emotion between the two are thanks to Hawn’s sheer force of will.

It’s an odd outing for Levine, who has proven himself adept at combining humor and heart in films like “50/50” and “Warm Bodies.” At the very least, Levine knows how to earn a laugh while keeping characters at the forefront, which makes the lackluster final product of “Snatched” feel that much more out of sync with its talented filmmaker. Dippold too is a funny, sharp writer, but all of her clever wit feels buffed out of “Snatched,” nowhere to be found.

The film’s mercifully slim runtime is padded with bizarre ancillary characters, including Ike Barinholtz as Emily’s agoraphobic brother (pointlessly kitted out with a bad haircut, oversized glasses and buck teeth, all the better to gin up those important “look at that weird mentally ill guy!” giggles the film revoltingly aims for) and Wanda Skyes and Joan Cusack as a pair of “strictly platonic” best friends who are always available to get Emily and Linda out of a pickle. The duo seem to be on hand to provide a little bit of commentary on similar characters in other films — much like Christopher Meloni, who briefly appears as a gung ho jungle guide who isn’t everything he puffs himself up to be — but each character is so thinly, boringly drawn that it’s impossible to read deeper meanings into them.

“Snatched” also tries to wink at public perceptions of Schumer herself, including the kind of trollish commentary one can easily find grossly splashed over the internet, and the film builds in a couple of targeted jabs at Schumer that all seem to come with a wink and a nod. One character calls her “garbage” (and makes her repeat the insult), while another tells her she’ll be safe from sex trafficking because she’s just not pretty enough, but even these attempts to add some meat to the undercooked film fall flat. Pairing up talented comedians like Hawn and Schumer with a wacky plotline to match should spell comedy gold, but “Snatched” is about as cheap and disposable as a tourist trap tchotchke.

“Snatched” opens in theaters on Friday, May 12.