The film's references to the classic "Will They/Won't They" trope help explain why, when it comes to superheroes in love, lessons from television could be the answer. 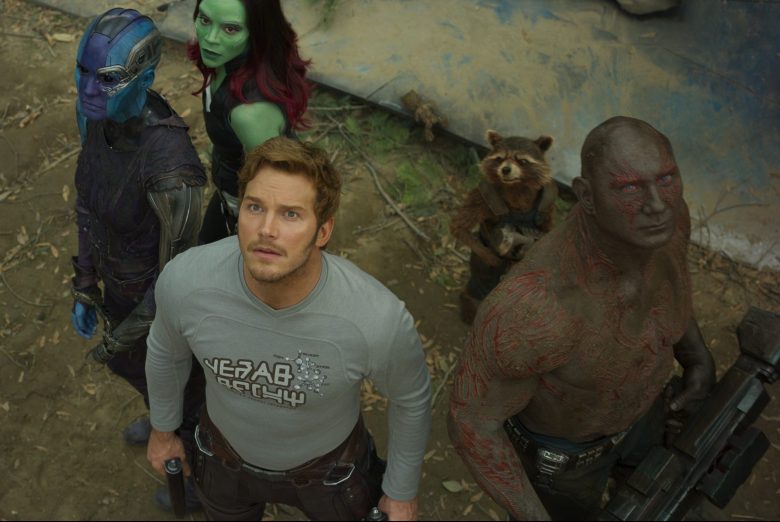 [Editor’s note: Spoilers follow for “Guardians of the Galaxy Vol. 2” (as well as “Cheers.”)]

Of all of the Marvel Cinematic Universe properties, “Guardians of the Galaxy” has proven itself to the master of the unexpected pop culture reference. But when Peter Quill (Chris Pratt) brings up the classic 1982 – 1993 sitcom “Cheers” to describe his relationship with Gamora (Zoe Saldana), it serves as a reminder that so few people genuinely understand one of pop culture’s most popular tropes: The “Will They/Won’t They” romance.

Not that the MCU has a proven track record for a sophisticated understanding of adult relationships — especially among the Avengers, romance is clearly a tricky notion. Captain America has managed a few stolen kisses in between battles, but no sustained relationship beyond his timeless affection for Peggy. Bruce Banner has a connection with Black Widow, but suffers from Hulkus interruptus (and Widow has her own issues). Hawkeye is happily married with kids, but that relationship seems to have lasted in part because his wife is a civilian and he kept her a secret from everyone else. Thor had a good thing going at one point with Jane Foster, but she seems to be relatively out of the picture at this stage “for a number of reasons.” The most mature love story might be between Tony Stark and Pepper Potts, but even that is over as of “Captain America: Civil War.”

There are a lot of nascent romances amongst minor characters — if the films keep to the comics, then eventually Scarlet Witch and the Vision become an item, and Hope van Dyne doesn’t just become the Wasp, but Ant-Man’s special lady. But by and large, you don’t join the Avengers if you’re looking for true love — at least, in your first film.

Over the course of the first two “Guardians” films, Peter and Gamora have clearly formed a bond — though it’s one that Peter compares to one of the legendary “Will They/Won’t They” romances of all time, Sam (Ted Danson) and Diane (Shelley Long) from the TV sitcom “Cheers.” “We’re the guy and the girl on the TV show who want to be together but will never do anything about it, because the ratings will go down,” is approximately what he says while they dance to Sam Cooke’s “Bring It On Home to Me.” When considering the tangled web of serialized properties that is the Marvel universe, utilizing the tropes of television as opposed to film is often a far more helpful way of thinking. And the “Will They/Won’t They” has always been one of television’s most beloved staples, despite the fact that it’s one of the most narratively tricky to address in a satisfying answer. The longer you draw out a potential relationship, the more anticipation you build up… but the timing on when you pop the bubble is essential to keeping audiences engaged.

Technically, referencing “Cheers” makes sense for Peter, since his knowledge of Earth pop culture is rooted in the ’80s. But in actually looking back at the Sam and Diane relationship, it’s not a perfect comparison. Sam and Diane weren’t so much “Will They/Won’t They” as they were “They’re On/They’re Off” — the mismatched pair kissed in the Season One finale, got together for semi-real over the course of Season 2, broke up at the end of Season 2, got back together in Season 3, and so on and so forth. Season 5 ends with Sam and Diane splitting up for real (until a temporary reunion in the series finale years later); along the way, there were other relationships, an alcoholic relapse (him), a stay at a convent (her) and no shortage of shouting.

More typically, when we discuss “Will They/Won’t They” relationships on TV, we’re referring to shows which feature two characters who are clearly meant to get together at a certain point, but whose actual union is delayed for years (who, in Peter’s words, have “an unspoken thing”). “The X-Files” remains, as always, one of television’s most fascinating examples of the “Will They/Won’t They.” Whether or not it was planned, fans quickly looked forward to developments in the relationship status of their favorite FBI agents, and creator Chris Carter drizzled out just enough to keep fans hooked for years. Gillian Anderson and David Duchovny in “The X-Files.”

Procedurals in general have often made use of this trope, with recent examples including “Bones” and “Castle,” but “The Office” did a nice job of drawing out the blooming love story between Jim (John Krasinski) and Pam (Jenna Fischer) over its early seasons. Right now on “Better Call Saul,” the delicate bond between Jimmy (Bob Odenkirk) and Kim (Rhea Seehorn) is a lovely emotional undercurrent to the show.

A compelling “Will They/Won’t They” can build a fandom that lasts for generations, but a badly executed one can torpedo a show’s legacy. The ’80s detective drama “Moonlighting,” starring Cybill Shepherd and Bruce Willis, is generally held up as the classic example of why you should never resolve your “Will They/Won’t They.” But “Moonlighting,” despite being utterly charming at the beginning, was also a show plagued by some pretty tricky behind-the-scenes drama (as it turns out, if your two leads have come to actively hate each other, their love scenes might lack some of their original chemistry).

As Uproxx’s Alan Sepinwall put it:

Here’s what’s key: the dramatic tension of “Will They/Won’t They” works best if it isn’t the show’s primary driving force. In fact, they often tend to be a consequence of the narrative being more interested in other topics. We see this in “GOTG Vol. 2”: Gamora’s main storyline has nothing to do with Peter. Instead, she’s contending with her vengeful sister Nebula, both of them eager to imprison and/or murder the other, until ultimately they resolve their differences and accept each other’s (somewhat contentious) sisterhood. Meanwhile, Peter’s got family issues of his own to deal with, coping with the reveal of not one but two father figures — both of whom die right in front of him.

Both characters have a lot on their plates, and have complicated emotional backstories beyond the actual events of the film. It’s easy to see why Gamora would be skittish with Peter: She’s more than aware of his flirtatious nature, given that during their very first interaction he tried working his horndog charm on her. She hardly comes from a normal upbringing, prone to reacting with violence whenever the emotional stakes might get raised. And Peter might make the hard play for her from time to time, but he’s emotionally stunted as well, still as much man as he is boy.

That said, the emotional bond is there, and when not fighting planets or each other, Pratt and Saldana have established some real chemistry. It’s the sort of on-screen relationship that grows richer with each installment of the narrative, mostly because there’s no pressure to end on a Hollywood kiss. Because we know that the story will keep on going, and that if the romantics watching and the characters themselves are lucky, things will only happen when the timing is right.

After all, with a good “Will They/Won’t They,” timing is key. Even if Peter was referencing the wrong show, it’s good that writer/director James Gunn didn’t try to force anything on these characters in “Vol. 2” beyond the sweet acceptance of Gamora’s final line: “Some unspoken thing.” “Vol. 3” is a few years away, but maybe by then, Peter, Gamora and even the Marvel universe itself will have matured a little bit more, to the point where they could be the franchise’s first truly authentic love story.

Hopefully, that maturity doesn’t cost “GOTG” its goofy charm. We need a franchise that’s not afraid to enhance an epic CGI battle between celestial beings with the sudden appearance of Pac-Man.

This Article is related to: Television and tagged Cheers, Guardians Of The Galaxy Vol. 2, Moonlighting, The X-Files