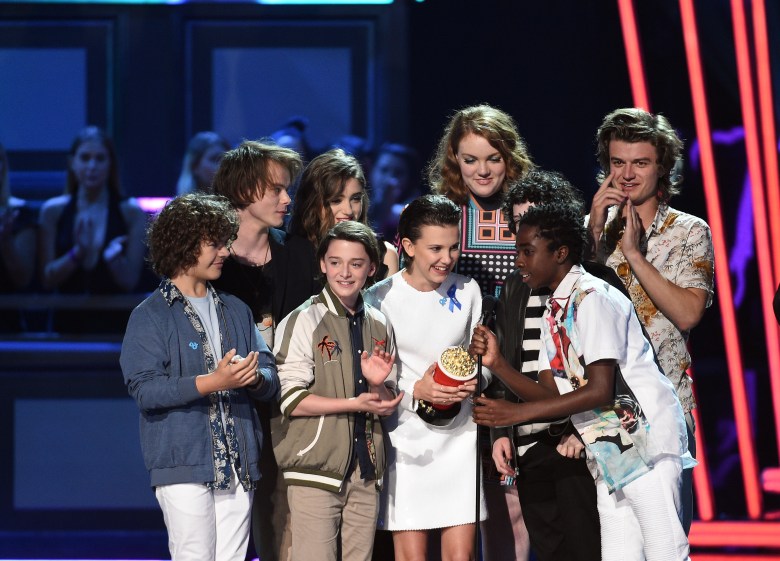 The cast of “Stranger Things” at the MTV Movie & TV Awards

MTV’s annual Movie Awards – now with TV attached – was as irreverent as usual on Sunday night. And yet, with this year’s entry, the tone was noticeably different.

For one thing, as widely noted, the newly rechristened “MTV Movie & TV Awards” included television series for the first time. And this was also perhaps the most woke MTV awards show in recent years, as the network embracing its decision to merge male and female performers into one, singular acting category. Other awards shows have blended male and female performers in the past, but never to the extent that a major kudocast like MTV has done.

And here’s how progressive Sunday night’s winners were: Of the 19 categories, all but two – was won (or shared a win) by a female and/or person of color, or a cast featuring women or people of color.

But for audiences at this year’s show, hosted by Adam Devine at the Shrine Auditorium in downtown Los Angeles, it also felt like a generational shift was occurring in real time.

In late 2015, MTV announced that it had come up with a name for the new, young generation now in their teenage years: “Founders.”

Alas, that moniker hasn’t stuck – and the age group born after, say, 1998 (the timing is a bit vague) is generally referred to as “Generation Z” or “Post-Millennials.” But whatever their name, it’s clear that the ratings-challenged cable network is ready to go all-in on this new group. MTV, VH1 and Logo president Chris McCarthy has already revealed plans to launch a daily live show (tentative title: “MTV Live”) targeting this group, just as “TRL” did 15 years ago for an earlier generation.

In other words: The clock is ticking, Millennials.

This younger generation is believed to be the most progressive yet when it comes to acceptance of gender and sexual identity, so it made sense that the show opened with “Billions” star Asia Kate Dillon, the first non-binary performer playing a non-binary character on TV, as the night’s first presenter.

Emma Watson, who won the award for Best Actor in a Movie, lauded the choice of Dillon, and thanked MTV for merging gender categories. “With acting you put yourself in someone else’s shoes,” Watson said. “The only distinction should be between each outstanding performance.”

Brown choked up when picking up her award, eliciting “awws” and cheers from the audience. But soon, a composed Brown managed to thank virtually every one of her reps while also thanking the Duffer Brothers for creating a “bad ass, iconic female character.” Reminder: She’s 13.

Even the “Best Kiss” award went to two youth: “Moonlight’s” Jharrel Jerome, age 19, and Ashton Sanders, age 21. Jerome said he hoped his role in the film would inspire other young performers that it was “OK, especially for young, minority performers, to step out of the box.”

Elsewhere during the show, 20-year-old presenters Zendaya and Tom Holland, from “Spider Man,” joked about going to the prom. The “Stranger Things” stars were enlisted for several comedy bits, and the similarly-aged cast of the blockbuster remake of Stephen King’s “It” debuted a new trailer for the film.

(It’s also duly noted that Watson, as the one-time star of the “Harry Potter” movies, is a bit of an icon among younger fans.) Feeling old yet, Millennials? Just wait: The action franchise that defined the Millennial age group, “The Fast and the Furious,” was given MTV’s “Generation” award. You know, the kind of thing they give old folks on the way out.

All joking aside, it is time for MTV to make the age leap. The Viacom network has struggled to relate to its audience for a while, as young people jump from YouTube to social media to generating their own content. At its best, MTV has always been able to both lead and reflect the voice of the generation, from the tail end of the Baby Boomers in the early 1980s, to Gen X in the late 1980s and early 1990s, to Millennials in the 2000s. This was a start.

Hopefully this is also a sign that MTV is truly embracing the inclusive spirit of the younger crowd. ABC’s “Black-ish,” which has tackled several socially conscious subjects, was named “Best American Story,” while the feature “Hidden Figures” was chosen as “Best Fight Against the System.”

At one point during the show, “Black-ish” star Tracee Ellis Ross brought out Rep. Maxine Waters to a standing ovation. And accepting the award for “Hidden Figures,” star Taraji P. Henson garnered rounds of applause for suggesting that, “We’re all humans, right? God made us different for a reason, so we better figure it out.”

All that being said, here’s one more takeaway from the show: Generation Z or not, we need to stop trying to make Noah Cyrus a thing.