Plus, the best Trump impression on TV right now gets the spotlight, and you get to admit in public "I Love Dick." 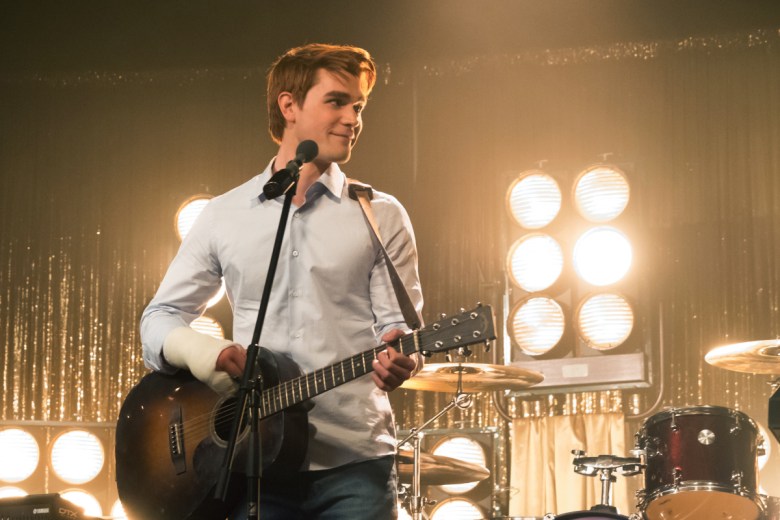 What to Watch: Thursday, May 11

What Is Going On Here? (To find out, see what you missed last night!) Episode Title: “Chapter Thirteen: The Sweet Hereafter”
Network Synopsis: Archie and Veronica continue to grow closer. Betty is tired of her family acting as if nothing has happened and confronts her mother. Jughead finds himself in an unexpected situation, leaving Archie and the gang scrambling. Hermione makes Fred an offer that seems too good to be true. Meanwhile, the truth about Blossoms’ family business is revealed leaving Cheryl to take matters into her own hands.
Why You Should Watch: The big mystery of the season — who killed Jason Blossom — was resolved in last week’s episode, so tonight “Riverdale” sets up what’s to come in Season 2. Given how the series began, we can probably expect some casualties. Episode Title: “Pilot”
Network Synopsis: A stalled married couple, Chris and Sylvére, temporarily relocate from New York City to Marfa, Texas. Tensions rise when the couple spends an evening with celebrated artist and mysterious cowboy, Dick, launching them into an unusual sexual fantasy.
Why You Should Watch: The full first season of the new dramedy from Jill Soloway and Sarah Gubbins doesn’t premiere until Friday, but thanks to Amazon’s pilot system, you can watch the first episode now in preparation for a fun, sexy, feminist binge this weekend. And believe me, you’ll want the head start on one of the spring’s most unique series, an intense exploration of what it means to both an artist and a woman. Episode Title: “Linda Sarsour”
Network Synopsis: “In the world of The President Show, Trump is bypassing the crooked media by hosting a late-night show direct from the Oval Office. No unfair questions from reporters, no awkward photo ops with German ladies, and no bedtimes. Just a fun show where he can put his unique Trumpian spin on such late-night staples as desk segments, field pieces and guest interviews. Vice President Mike Pence is featured as his sidekick, played by Peter Grosz.” (Episodic information unavailable.)
Why You Should Watch: After a week like this, maybe laughing at the President is the only rebellion you have the energy for. Fortunately,  Anthony Atamanuik has one of the best Trump impressions in the current political cycle, and the series has recently found its way into mainstream news thanks to a recent viral clip of a little girl telling Atamanuik (in character) “a disgrace to the world.” In tonight’s episode, Palestinian-American political activist Linda Sarsour is the guest. Episode Title: “My Home”
Network Synopsis: The digital era offers us new technologies to protect ourselves, but are these devices defending our homes or making them more vulnerable? In this episode meet a woman whose home is invaded by a Ratter, a digital stalker who gains entry through her laptop; enter a neighborhood where residents are battling over proposed camera surveillance to monitor everyone’s coming and goings; and a sex offender who received the ultimate punishment for invading his victims’ privacy – life under constant surveillance.
Why You Should Watch: If you can’t afford a fancy network-enabled home, watching this episode of Showtime’s paranoid docu-series about the influence of technology on modern life will make you feel better about it. Each storyline feels like the beginning of a “Black Mirror” episode, but with the added (horrific) benefit of being real.

This Article is related to: Television and tagged I Love Dick, Riverdale, The President Show, What to Watch