After news that T.J. Miller would not be returning next season, this week's episode offered the perfect roadmap to keeping his spirit alive without him. 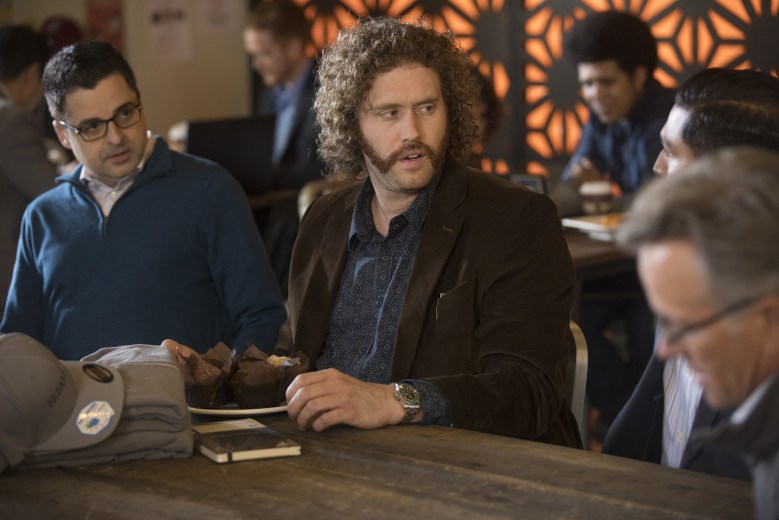 Back at the incubator, Erlich angled toward sole credit for the new FGI deal, before Richard fought back, arguing the new client as a victory of the tech product. And so, the world of the show and the world of the headlines surrounding it intersected. It’s an interesting, chicken-or-egg argument about Erlich Bachman as a TV entity: is he entertaining because of Miller’s delivery on lines like “Ah! An adage…” or is he simply the flashiest boat that catches everyone’s eye by virtue of the show’s constantly rising tide?

When Richard explains “It’s because of the tech” (while Thomas Middleditch gives the perfectly emphasized callback to the wrist movement that birthed middle-out), it’s a compelling argument. Sure, without Erlich as a facilitator, it’s one less way for the show to power the loyalty-churning engine that drives the show forward. But “the tech” of “Silicon Valley” is the jokes and the characters that will still be there after he’s gone. Dinesh and Gilfoyle will still find ways to thrive off their mutual hatred. Jared will still unspool more of his staggeringly tragic past — that his line about dealing with bedroom intruders feels relatively tame is a testament to how many horrifying details he’s already given us.

READ MORE: ‘Silicon Valley’ and T.J. Miller Part Ways: How Season 5 Can Survive Without Him

The newly created Bream/Hall firm will be there too, with Laurie and Monica still there to give insight into how big-business deals can still be powered by hearsay, office politics and sophisticated corporate espionage. It’s because of their emphatic rejection of Erlich (and their visionary fleece swag) that the show gets to introduce Kenan Feldspar (Haley Joel Osment), a possible Palmer Luckey stand-in and the owner of a majestic, Tom-Hanks-in-”Cast Away”-length beard.

Osment’s joyful gregariousness, respect for an outsized, confident personality and willingness to go along with a sweet-sounding deal means that he’s already something of a character fusion of both halves of The Corporation Formerly Known as Bachmanity. With Big Head subsumed by his disastrous tenure at Stanford, the show has found another potential replacement for its outgoing distinctly facial-haired Hacker Hostel proprietor. With Erlich out of the way in the FGI negotiations after he and Richard’s difference of opinion, Richard found himself in a sticky situation when his talk of bold, ambitious action inspired Liz to initiate a spontaneous office-floor tryst. Wracked with guilt and fearing that his actions could jeopardize the future of the company, of course Richard consulted Jared first. The tall guy’s suggestion: be honest and break things off. (Always count on Jared to follow up hard truths with a compliment chaser — “You’re a catch. Just deal with it,” is a cornerstone in Jared’s ongoing Pyramid of Optimism.)

The episode’s closing office sequence is the show writ small, at this point. Richard’s intended, be-the-bigger-man talk became a less-than-glowing performance review from Liz, a classic example of the show’s ability to turn a well-intentioned gesture into a heaping dose of perspective. And like last season’s great episode-capping “aloha” realization from Big Head, Melcher’s last line about keeping his past history with Pied Piper a secret from Liz left the whole thing riding off on a squirmy wave of dramatic irony.

It’s a fitting end, since most of what powers “Silicon Valley” is what comes in the wake of a lie of omission. Don’t have an idea? Dance around it and use everyone else’s response to power the next move. Don’t have a key member of the creative team on board? Refuse to acknowledge that fact until that person’s mere mention gets you in the door.

We’ve still got four more episodes of Season 4 left and “Silicon Valley” is already using Erlich’s own logic to pave the way without him.