"The Late Show," "Full Frontal," "The Daily Show" and "Late Night with Seth Meyers" were shut out of last year's category. But that was before the election changed fortunes in late night. 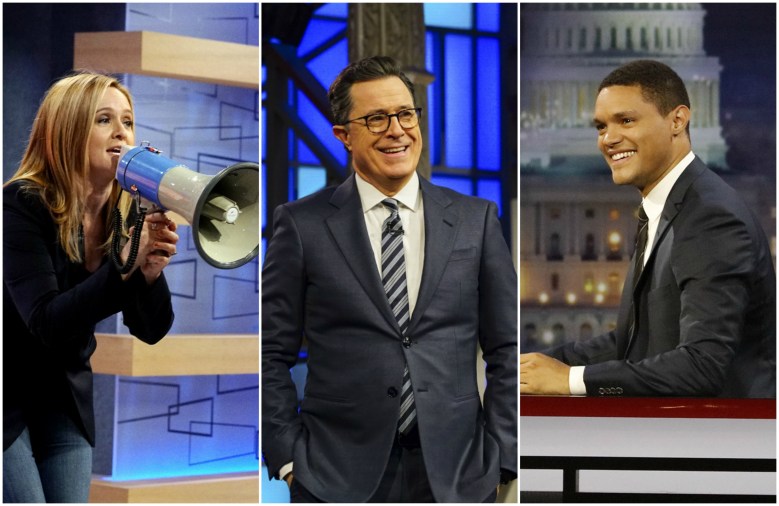 As host of “The Apprentice,” one thing eluded Donald Trump: an Emmy. The fact that the Television Academy never awarded him one drove Trump — whom you might know is now the President of the United States of America — completely bonkers.

Trump wanted an Emmy bad enough that he went on the Hollywood campaign trail in 2008, taking trade newspaper reporters (including, um, this one) to lunch in an attempt to curry attention and grab a win for “The Apprentice.” But that was in the middle of “The Amazing Race’s” hot streak. Ultimately the closest Trump came to Emmy glory was singing the “Green Acres” theme with Megan Mullally on stage at the 2006 ceremony.

It’s a bit ironic, then, that Trump may play a hand in which shows are nominated — and ultimately win — this year’s Emmy for Outstanding Variety Talk Series.

What a difference a year makes. Although last year’s winner in the talk category, “Last Week Tonight with John Oliver,” has a heavy focus on news and politics, most of the rest of the nominees did not: “Comedians in Cars Getting Coffee,” “Jimmy Kimmel Live,” “The Late Late Show with James Corden” and “The Tonight Show Starring Jimmy Fallon.” (The sixth nominee, “Real Time with Bill Maher,” also travels in politics.)

Shut out of the category in 2016 were “The Daily Show with Trevor Noah,” and new shows hosted by “Daily Show” alum: “The Late Show with Stephen Colbert,” “Full Frontal with Samantha Bee,” and “The Nightly Show with Larry Wilmore.” (Also not there: “Late Night with Seth Meyers.”)

The omissions were a bit of a surprise, given Television Academy voters’ love of all things “Daily Show.” Last year was the first time “The Daily Show” (or any Comedy Central show, for that matter) had been shut out of the category since 2000.

But 2016 was still a different time for late night talk: Fallon and Corden were still ruling the zeitgeist with pop culture-infused bits, and that seemed to be the future of late night.

It’s perhaps a symbolic coincidence that Fallon’s famous Trump hair tussle, which many believe helped humanize the candidate and sealed the deal for his election, took place on September 15, just three days before the Emmys and the launch of the fall TV season. That moment haunts Fallon, who recently told the New York Times that the negative reaction “devastated” him: “I didn’t mean anything by it. I was just trying to have fun.”

Post-Trump, audiences appear to still be up for having fun – but many of them are searching for a different kind of frivolity. The kind of fun that, perhaps, serves to soothe nerves frayed by the new president.

Shows that have benefited from the sudden cultural shift include “The Daily Show,” “Full Frontal,” “Late Night” and “The Late Show.” Locked out of last year’s talk show Emmy competition, they’re all at the front of the current zeitgeist, and expected to score nominations this time around.

Ratings-wise, “The Late Show” appears on track to squeak out a razor-thin total viewers victory for the 2016-2017 TV season, averaging 3.195 million viewers to “The Tonight Show’s” 3.173 million. “The Daily Show” just came off its most-watched week ever under Noah, averaging 1.045 million viewers during the week of May 15. “Full Frontal” and “Late Night” are also on the rise.

READ MORE: Trevor Noah Isn’t Angry with Donald Trump, and That’s Why Millennials Are Flocking to ‘The Daily Show’

Both Colbert and Noah, in particular, took time to find their voices – and ironically, it was Trump who helped them find it. Meyers is finding big traction with “A Closer Look.”

“Some audiences only want to engage in outrage and anger, and so they will search a show for them,” Noah said on Monday night at an Emmy For Your Consideration event in Hollywood. “Some people only want to only enjoy politics on the surface. They want to gloss over it and just make the joke about Trump’s hair that gives the perception of poking fun at Donald Trump. And then there are audiences who say they want a balance, that say ‘I do get angry on some days, there are things that make me cry, there are things that make me smile.

“Essentially the audience that I try to do a show, that is your place of solace,” he added. “On the show, in this moment, we get to escape. We don’t get to escape the reality, but we escape the fear of becoming that reality. It’s a moment of respite. You get to say, ‘the world is going to end, but man, that is funny.'”

“The Daily Show,” “Full Frontal,” “The Late Show,” and “Late Night” have become a comfort zone for viewers looking for some perspective under a Trump administration. Those shows are now at the top of their game, and beyond ratings, the buzz is sure to make Emmy voters take notice this year. If one of those shows, or another politically charged series, ultimately wins this year’s Variety Talk Emmy, expect Trump to quickly jump on Twitter and take credit. Ultimately, the former “Apprentice” host may finally lay claim to the Emmy he always wanted.

This Article is related to: Awards and tagged Donald Trump, Emmys, The Daily Show With Trevor Noah, The Late Show with Stephen Colbert