In Margaret Atwood's horrifyingly relevant American dystopia, the color red is the driving force for the Emmy-contending cinematography and costume design. 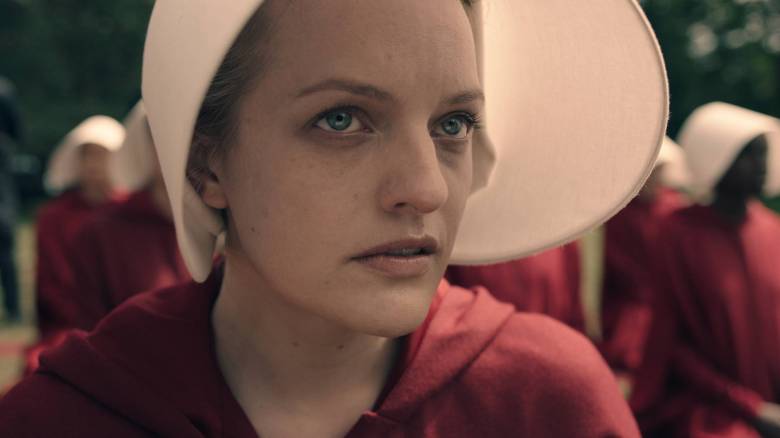 “The Handmaid’s Tale” series on Hulu was tailor-made for Trump’s America, and nothing sums up the horror of Margaret Atwood’s totalitarian Gilead better than the “salvaging” ritual at the end of Episode One. The color red, worn by the Handmaids, becomes the key visual component, symbolic of both menstrual blood and political rage.

The Handmaids, forced into sexual servitude because of their rare fertility, are permitted to encircle and execute a rapist every month in a public display of controlled catharsis. And it comes at the worst possible moment for protagonist Offred (Elisabeth Moss), who learns that her best friend, Moira (Samira Wiley), is likely dead because of her rebellion as feminist and lesbian, so she takes charge with uncontrollable aggression.

Finding the Right Red in the Costumes

Reed Morano, the cinematographer-turned director, who helmed the first three episodes, established the palette of Atwood’s color-coded dystopia with cinematographer Colin Watkinson and costume designer Ane Crabtree. Because of the gray, muted look of Gilead, the red of the Handmaidens stood in sharp contrast to the teal of the Commanders’ Wives, who shamefully observe their husbands sexually using the Handmaidens.

“We made it a blood red and this heavy dark teal for the Commander’s Wives to make them opposites in the way of Technicolor films,” said Crabree, who also worked on the dystopian “Westworld.” “And also we made them powerful in the frame because there’s constant tension.”

For Crabtree, who was so enraged about the Trump election that she threw herself into her work for cathartic release, the salvaging couldn’t come soon enough. “It was the second day of shooting and it was scary and I wasn’t sure that I was going to make it on a TV schedule,” she said. “It was a giant scene with Ann Dowd as the Aunt speaking to a hundred Handmaids. It was around noon with all of [them] laying on the grass asleep during a break and the world changed. “It was up and running and breathing. And there was a quiet vacuum of stillness — abstract, painful, and fulfilling — because the script mirrored what was happening with the political sea change in America.”

The hems were shortened so the women could still fight. But there was also an oppressive heat. “The dresses were thin, but the wool capes were uncomfortable for the actors, who had to move in to kill a man with their bare hands,” Crabtree said. “What that does is show what you’re made of. And it was a reminder for the rest of the shoot that we did this crazy thing.”

Shooting a Heightened Sense of Reality

Watkinson shot Gilead with the Alexa Mini and vintage Canon K35 lenses for a painterly look reminiscent of Vermeer. He used atmosphere to create depth in the frame and would light from outside the room. The neutral background and use of gray diffusion perfectly complemented the red and teal and made for a striking image.

The inspiration came from nature: red maple leaves against a moody teal sky. “We talked compositionally about formal, tableau, Kubrickesque types of framing for Gilead, as opposed to the flashbacks, which would be more visceral, verite,” Watkinson said. “That’s where Reed comes from. I adapted the lighting to suit both. The flashbacks were rawer, dark, and not polished at all. We made Gilead glossier looking and color wise as well. We talked about enhancing the red in the DI (color correction).”

The salvaging scene told Watkinson a lot about how Moss was going to portray Offred. The outpouring of emotion, which was so contained up to that point, is released physically and violently. He discovered the nuance of movement in her face and neck. “We were going to be right there with her, and then we widened out and went bigger with the death of this guy being beaten to death.” “It was a very graphic depiction with hand-held and Steadicam and drones, which was my choice. It was hard to get Reed to use a drone — she likes to be right in there. And that’s what I liked about her. Because it’s a point of view show, in the moment, and you have to drag her out of the character. It told me how involved she was.”

Watkinson thought it would be interesting to have a god’s eye view of the Handmaids filing through the green landscape in a procession.”I wanted to see them move through the trees,” he said. “Little pops of red and then filing out into a staging area. I wanted to show the world where you are. You can cover a lot more ground with the drones.”

Crabree agreed: “What I quite liked was the scene from up top with all of the caplets, which were like larva or lice,” she said. “But what I think is cool, costume wise, is this antiquated idea of a woman covered up with a long flowing dress and cape, and to have them be so physical was really exciting and not what you would expect.

This Article is related to: Awards and tagged Emmys, Reed Morano, The Handmaid's Tale, Top of the Line