Damon Lindelof, Tom Perrotta, and Mimi Leder explain how breaking a cardinal rule of TV writing led to some of the best scenes in Season 3. 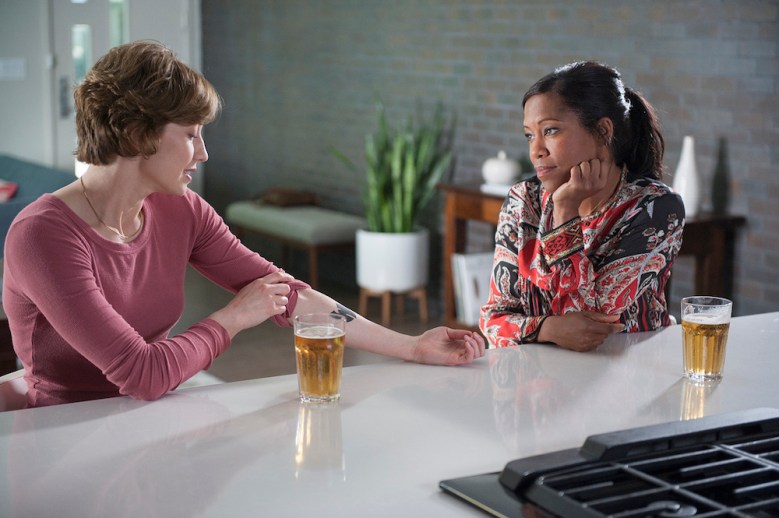 “Wouldn’t it be great to have a scene where a character who claimed to be God was in the episode, but [a man of the cloth named] Matt is like, ‘You’re in my story. God is in my story.’ And God is basically like, ‘No, no, no. Everybody’s in my story.'”

Heated dialogue is a regular source of drama in television, given it’s a character-based medium and characters need to generate tension (not to mention the lower production costs and smaller screen than cinema). And they often lead to great scenes, like the one described above.

But what if there wasn’t an argument? What if the scenes lacked an external conflict, and focused instead on the internal? What if, instead of fighting over whose story they were in, the characters just told stories?

Convention tells us that would make for boring, visually uninteresting entertainment. Or, as Lindelof puts it, “Ultimately, on a narrative level, ‘play it, don’t say it’ is the fundamental rule.”

But in reality, it would look like your favorite scenes from “The Leftovers” Season 3, and some of the best scenes on television this year.

READ MORE: ‘The Leftovers’: Justin Theroux Gets Naked in a Surprise Emmys Campaign That’s Not From HBO — Watch For as jovial and outlandish as the above conversation between co-creators sounds, it actually starts to address those other scenes — the rule-breaking, multiple-page, storytelling monologues.

“We knew the season was about storytelling, but more importantly, it was about appropriation,” Lindelof said. “How can I take your story and make it my story?”

And there are a lot of stories changing hands in “The Leftovers.” Aside from the above example, there are stories about tattoos, suicide, missing children, and beach balls, just to name a few. Yet what’s shocking about these tales is that most of them weren’t shown. Unlike Matt’s debate with God, we merely watched and listened to characters who reflected upon a story that already happened. We didn’t watch the stories take place. We just heard about them.

So how does “The Leftovers” not only get away with it, but use scenes of characters recounting past events as intensely satisfying, climactic, visual moments?

Page 1 of 3
Continue Reading: ‘The Leftovers’ Is the Best Show on Television Because It’s Breaking the First Rule of Storytelling

This Article is related to: Awards and tagged Consider This, Damon Lindelof, Emmys, The Leftovers