The nod to Marlon Brando’s “The Wild One” character is just the start. 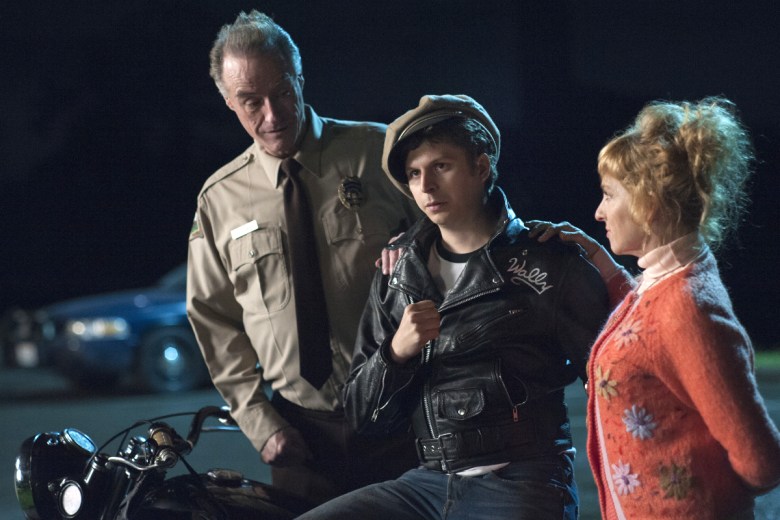 Of all the confusing, confounding things that pop up on the return of “Twin Peaks,” we have no mixed feelings about one thing: Wally Brando.

The ingeniously named character shows up in the fourth episode of the season, care of a cameo by Michael Cera. Wally Brando (Brennan?) is the adult son of Twin Peaks Sheriff’s Department receptionist Lucy (Kimmy Robertson) and deputy Andy (Harry Goaz), and was born on Marlon Brando’s birthday, April 3. While we knew Lucy was pregnant in the original series, Wally wasn’t born until after Agent Cooper (Kyle MacLachlan) went missing.

The 25 years that have passed have been kind to Wally Brando, who has taken to the open road on his motorcycle and stops by Twin Peaks to bring important messages to his folks and the town’s acting sheriff. Here’s why Wally Brando showed up at just the right time on the show. Marlon Brando, “The Wild One”

Of all of the Marlon Brando characters that Wally Brando could have emulated, biker Johnny Strabler from “The Wild One” was the perfect choice. We haven’t seen many current references to him lately, but back in the 1950s, Johnny set the world on fire with his ringer t-shirt, leather jacket and cocked hat. He also fits Wally Brando’s itinerant lifestyle.

Then again, Cera’s performance is anything but the swaggering and belligerent Johnny. Instead, his speech is slow and deliberate… sort of like Don Corleone. He even mentions the word “godfather” a couple times. More on that below.

For those who’ve been wondering where Sheriff Harry S. Truman is, we finally get an explanation when Wally says, “It’s good to see you, too, Sheriff Truman. As you know, your brother Harry S. Truman is my godfather. I heard he is ill. I came to pay my respects to my godfather and extend my best wishes for his recovery, which I hope will be swift and painless.”

Note the dual use of the word “godfather.” In real life, Michael Ontkean, who played Harry S. Truman, opted not to return to the series. But here’s a fun fact: Robert Forster, who plays the active Sheriff Frank Truman (named for Franklin D. Roosevelt), was the first choice to play Harry S. Truman in the original series but had to bow out due to a prior commitment to another television pilot.

3. We Needed Some Loving Sentiments Badly

Episode 4 already packed in some much-needed levity with Cooper’s reentry into the world and Bobby Briggs’ over-the-top reaction to seeing Laura Palmer’s photo again, and therefore Wally Brando’s arrival fit right in. He also brought with him something we have been sorely lacking in the series thus far: expressions of love.

As strange and stilted as Wally Brando’s delivery is, his affection for his parents and the town are evident. “It’s an honor to see you again,” he says. “You know, my heart is always here with you and these fine people, my parents, who I love so dearly.”

In this show, it’s easy to get caught up in the mysteries, the evil and the weirdness, but it’s the show’s heart which allows us the real connection we need to shake off the face-eating creatures, murderous doppelgängers and bloated corpses.

READ MORE: ‘Twin Peaks’ Episode 4 Is a Gift Filled with Answers — And a Warning About Wanting More

4. Until Cooper Gets Back to Normal, Wally Brando Is Bringing the Gratitude

So far, Cooper has not been allowed to be his happy, wide-eyed, pie-eating self. First we saw him still stuck in the Black Lodge, and now that he’s out, he hasn’t been able to regain his proper big boy functioning yet. He can’t even drink coffee correctly. The horror!

In his way, Wally Brando takes up the mantle for expressing gratitude. Whereas Cooper rained platitudes on pastries and coffee with gusto, Wally Brando is more meditative but nevertheless happy. His appreciation of people, of traveling, of words is unhurried and thoughtful, and for that, we’re going to place him with the good guys. Behold this exchange:

Wally Brando: My family, my friend, I have criss-crossed this great land of our countless times. I hold a map of it here, in my heart next to the joyful memories o the carefree days I spent as a young boy here in your beautiful town of Twin Peaks. From Alexandria, Virginia to Stockton, California. I think about Lewis and his friend Clark, the first Caucasians to see this part of the world; their footsteps have been the highways and byways of my days on the road. My shadow is always with me, sometimes ahead, sometimes behind, sometimes to the left or sometimes toe the right. Except on cloudy days or at night.
Sheriff Frank Truman: Yes, well, Wally, it’s great to see you again. And may the road rise up to meet your wheels.
Wally Brando: That’s a lovely turn of phrase. Thank you. (pause) My dharma is the road; your dharma, [gestures at the town of Twin Peaks].

5. Wally Brando’s Appearance Is Perfectly Unconnected to the Larger Story

“Twin Peaks” is a lot to take in, not only because of the horrifying nature of the content, but also because it comes with 25 years of history that has only become more complex and widespread since the show’s original airing. Wally Brando is an oasis of uncomplicated calm that doesn’t need to be any more or less than he is. Since he’s presumably unconnected to the White/Black Lodges of them all, we can enjoy his presence without any other messy speculations about how he may fit into the bigger mystery.

Let’s hope this isn’t the last we see or hear of Wally Brando, but if it is, we’re grateful for what we’ve had.