The man behind Jonah Ryan discusses the opposite of method acting and how ridiculous it is that "Veep" is a political aspiration in 2017. 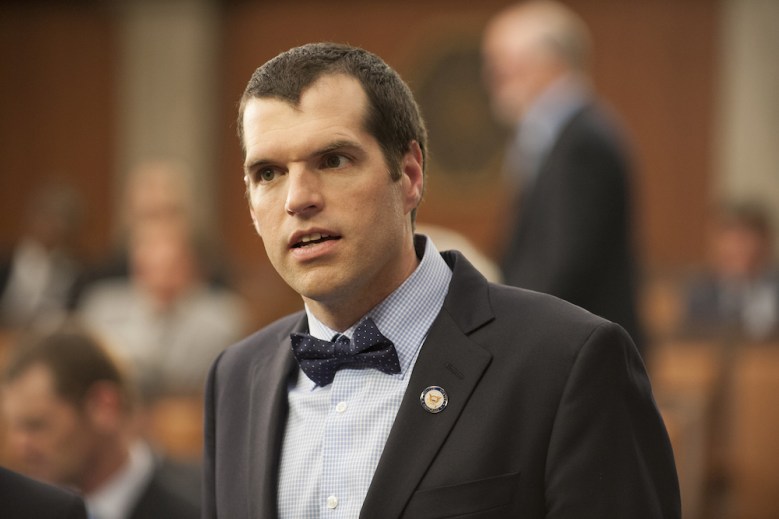 Two years ago, was it more improbable that Jonah Ryan would be a congressman or that he’d have a girlfriend?

Timothy Simons takes a long time to answer this question. He should. It’s a tough one. Go ahead, and ask yourself: Two years ago, when Simons’ “Veep” character was getting his balls fondled by Patton Oswalt’s hands-y VP staffer, Teddy, was it harder to imagine him with a girlfriend, or as a United States Congressman?

“It would probably be that Jonah would have a girlfriend,” Simons said after a considerate pause. “And for these reasons: [Congressmen] don’t end up having to spend a lot of individual time with the voters. [Jonah] could probably spend five minutes with anyone and get them to believe that he’s a good dude, and that would be the lasting impression. Even if he met a girl that was into him, the more time and the more experience that she had with him, eventually she would be like, ‘All right, this is untenable.'”

That Simons made this choice (as well as the fact that it’s objectively correct) points not only to the repulsive nature of the fictional congressman from New Hampshire, but also to the state of American politics. The topic has come up, oh, once or twice as viewers dig into the sixth season of HBO’s Emmy award-winning comedy, and the real-life news cycle functions as an unfunny parody of (what’s still) a very funny parody.

“I was thinking about this the other day: When it comes to Sean Spicer and the whole thing about him being in the bushes and asking for the lights to be turned out? I feel like if we were playing that scene, the director would come in and start shouting, ‘Look, you can either have him in the bushes or asking to turn the lights out, but if you try to do both, no one is going to believe you. So make the fucking choice.’ That’s a perfect example of how reality has become so ridiculous that you can’t do both those things. [If it was a TV show] people would reject it immediately.” “It frames the show a little bit different where all of a sudden we’ve become aspirational,” Simons said. “The jokes are still good, but the real world has framed us in a way that we’re no longer the worst administration you’ve ever seen. The idea that we’re something to be looked up to is insane.”

When asked about spending his days playing the second-worst example of American politics run amok, Simons said he could never remain in character beyond the performance.

“There really is no going method with Jonah because I would’ve been fired by now — for rampant sexual harassment, the first of many complaints against him,” Simons said. “I do think sometimes I can overcorrect and end up being too nice to make sure people know there’s a distinct separation between myself and that individual. At this point, because there’s so many different ways a scene could go, it’s always best to just do what a child would do — what a toddler would do. That’s a pretty good jumping-off point.”

During Episode 5, when Jonah first meets his current fiancé, Shawnee (Mary Holland), the scene directly connects the toddler mindset with Jonah’s character. Ben (Kevin Dunn) and Kent (Gary Cole), Jonah’s two staff members, play Mom and Dad as they scold the Congressman for not eating before coming to a party where he’s not allowed to eat.

“‘I wasn’t hungry then,'” Simons said, remembering Jonah’s response with a laugh. “It’s so ridiculous. And we’re saying it’s ridiculous, but we literally have a person in a higher office than Jonah’s who I wouldn’t even say it’s a stretch to claim has the maturity of a toddler. That would even be giving him something. So it’s actually not that ridiculous.”

That scene also serves to highlight one of the most convincing traits Simons brings to the character: his “outright refusal to learn lines.” OK, that’s a joke, but only partly. Because “Veep” is constantly adjusting dialogue, blocking, and scenes in general, Simons has to know the material thoroughly, be ready to adapt on the fly, remain true to his motivations, and all without ever sounding too rehearsed — or even play into the jokes.

“I’ve memorized the lines, but it can’t sound pointed,” Simons said. “I don’t really think about the jokes or the comedy of it first. Then it feels forced, and I feel uncomfortable and hammy and the jokes don’t work. Once I find a clear through line of thought and objective, it becomes much easier for me to then think about why it’s funny.”

“Sometimes the frustration of where you’re trying to go as an actor can play into the frustration that Jonah feels,” he said. “He knows he has to go talk to Shawnee and make it better, but he has no skills or ability to do that. So it just comes out as this weird toddler temper tantrum.”

And in bringing that toddler to the masses, Simons has become the most politically relevant performer on TV — well, on scripted TV.

This Article is related to: Awards and tagged Consider This, Emmys, Timothy Simons, Veep