The Kristen Bell-starring teen detective drama has a new streaming home, and if you never saw it, Season 1 might be one of the last decade's greatest TV accomplishments. 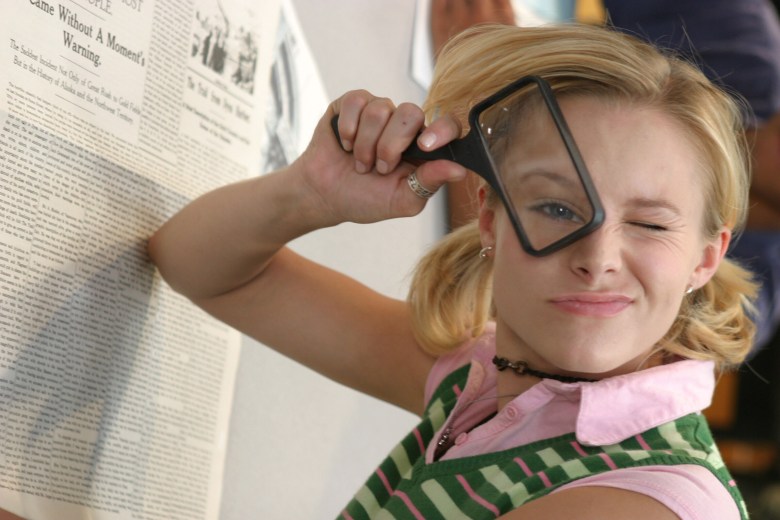 In 2004, UPN debuted “Veronica Mars” to what quickly became an adoring audience. Three years later, after a chaotic run that involved a network change, the constant threat of cancellation and a thwarted attempt at a Season 4 set at FBI headquarters, the series came to a close.

This week marks the 10 year anniversary of that last episode, and while it wasn’t the last we saw of Veronica (Kristen Bell) and her friends thanks to the 2014 feature film, the show’s cancellation stung. Fortunately, “Veronica Mars” now has a new, subscription-free streaming home at go90.com, making this the perfect time to revisit it.

For fans who might want to revisit the first season’s highs and lows, we’ve come up with a list of the ten best episodes that demonstrate why “Veronica Mars” remains gone but not forgotten. If you’re looking for a quick introduction to the show, this list might also work (which is why we’ve arranged it chronologically).  But if you’ve never seen it, watch it from the beginning. Season 1 is just. too. good. Thank us later.

In less than an hour, creator Rob Thomas sets up the universe of Neptune, California — a rich elite used to getting what they want, the lower-class folks just trying to get by, and plucky teen detective Veronica Mars, forging her way through this polarized world while also investigating the case of her life. So many shows have begun with this question: “Who killed [name of girl here]?” But the fact that the person trying to solve the mystery wasn’t some unrelated detective, but the girl’s best friend, elevated the series to a new plane. All of this, and more, was set up by the pilot, immediately diving us into a show rich with scandal and secrets, one with its own voice.

This early episode doesn’t feature any major plot reveals — but it is hugely informative when it comes to the girl who was Lily Kane, and the impact she had on her friends. In paying tribute to Lily (who was brilliantly played by a then-unknown Amanda Seyfried), “Veronica Mars” went beyond the “tragically dead girl” trope to make sure Lily was remembered as vibrant, complicated and real — a message made explicit by Logan’s (Jason Dohring) tribute video seen at the end of the episode, as well as Veronica making good on a long-ago promise. We meet the awesome Mac (Tina Majorino), the show takes on slut-shaming in an era prior to the term slut-shaming, and Veronica gets confronted with a major reveal. “Like A Virgin” is one of the show’s great examples of how to blend one-off narratives with a season-long arc; the final sequence features a jaw-dropping gut-punch pulled right out of soap operas, except the show makes sure it feels well-earned. Bell’s performance, as she copes with the potential reveal, is the primary reason for that.

A fateful poker game becomes a layered mystery with multiple points of view — a classic mild “Veronica solves the case” investigation with plenty of fun “Columbo” flare. What makes this a standout episode of the series, though, is the other storyline: A stalker is threatening Logan’s father Aaron, and the final minutes unravel the Echolls family in a brutal fashion. It’s one of television’s most deeply cynical Christmas episodes, but captivating on that level.

Hey, special guest star Aaron Paul! It’s a few years before “Breaking Bad,” so he’s not listed as special, but he’s special in our hearts. Also, the case of the week is a rare dive into a hardcore murder investigation, but comes with a big surprise for Mac and notable movement forward for Veronica as she takes on the Kane family’s attempts to silence her. There’s a fair amount of silliness in this episode (including a sequence entirely devoted to creating an opportunity for Kristen Bell to show off her singing talents), but it’s enjoyable silliness. It also unveils a fair number of student secrets and, in the final moments, sets off a plotline that has a major impact on the rest of the season.

This is a standalone installment from the first season, but it kicks off with a fascinating dilemma: A charismatic teacher is accused of sexual misconduct by a student, and Veronica sides with the teacher. It probably helps that Mr. Riggs is played by longtime Thomas collaborator Adam Scott (who would go on to star in the seminal Starz comedy “Party Down,” created by Thomas, John Enbom, Dan Etheridge, and Paul Rudd), but the great guest star appearances don’t stop there, as future “Gossip Girl” queen bee Leighton Meester plays the girl who stands by her story despite the evidence Veronica uncovers. Would this episode make this list if it didn’t feature the season’s most anticipated kiss? Absolutely yes, even though it might be one of the most notable kisses of 21st century television, because the episode is also an interesting look at the issue of school violence and bullying, from a time when there wasn’t a prescribed approach on how to approach it, and even a former bully might have a tender side. Jonathan Taylor Thomas as a guest star isn’t necessarily a selling point, but he does add interesting spice to the mix (especially given that the show features no shortage of actors well above the age of 18 playing younger). More importantly, Joey Lauren Adams, as a substitute journalism instructor with the best of intentions, is legitimately a heartbreaker.

There were two major mysteries running through the first season of “Veronica Mars”: What happened to Lily Kane, and what happened to Veronica the night she was roofied and maybe raped? One of the show’s most brilliant moves was to solve the latter so that the former could be the entire focus of the season finale, and the way in which Veronica untangles the mystery surrounding Shelly Pomroy’s party makes for maybe one of the show’s most captivating installments.

“Leave It to Beaver” hinges on a few key reveals — it’s a deliciously twisty episode — followed by a terrifying conclusion that’s rich with action. Most importantly, it manages an impossible task: Create real closure for the season arc, but also establish interest in the narrative to come. And believe us, Season 2 is equally soaked in riches.