Will, Grace, Jack and Karen cannot be stopped. 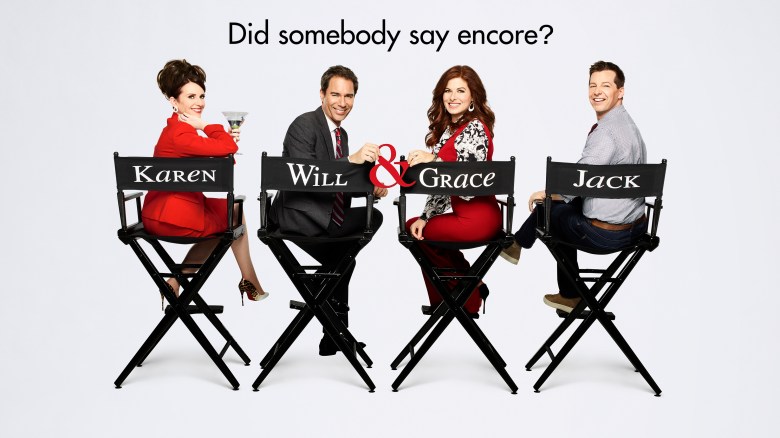 It’s time to play the music, it’s time to light the lights… Wait, wrong revival. And certainly the odds look better for NBC’s “Will and Grace” than ABC’s ill-fated “The Muppets.”

READ MORE: ‘Will & Grace’: 5 Big Issues the Groundbreaking Sitcom’s Revival Has to Address (Or Does It?)

Marking the return of Will (Eric McCormack), Grace (Debra Messing), Jack (Sean Hayes) and Karen (Megan Mullally) to our screens, the tale of two best friends and the weirdos in their lives had seemingly come to a close in 2006. In fact, we’re very curious as to what the new season of 10 episodes will look like, especially given that the Season 8 finale brought with it a real finality. As we wrote last January, when the announcement was made:

The question becomes how much “Will & Grace” will acknowledge the events of “The Finale.” Will it stay in line with the timeline of the show and take place 11 years after the events of the finale? Will it include Will and Grace’s new life partners and children? (Which is more than possible! Harry Connick Jr.’s just doing that talk show, and Bobby Cannavale is no longer the property of HBO’s “Vinyl.”) Or will it just completely disregard all previously established continuity?

However things might work plot-wise, we do have a basic sense of what the return of “Will and Grace” is going to look like, thanks to last fall’s election-themed sketch (as well as the fact that there are eight seasons of the show which precede it). It’s definitely great to see Will and Grace back together again.

This Article is related to: Television and tagged Debra Messing, Eric McCormack, Upfronts, Will and Grace