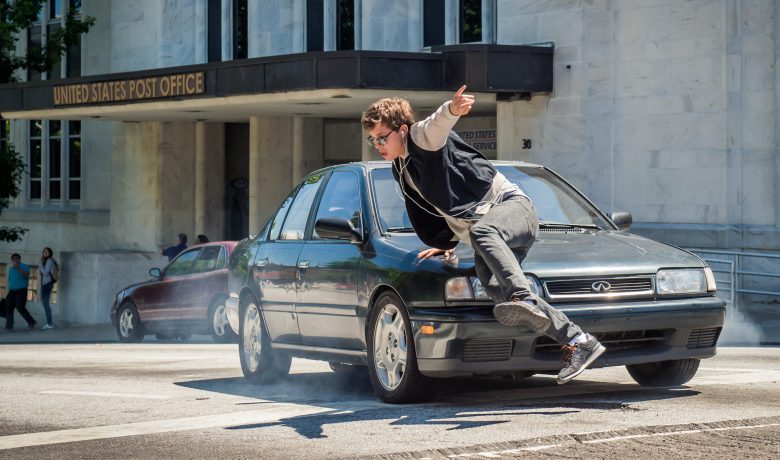 On most current Hollywood films, expert action units like Prescott, Fry and stunt coordinator Robert Nagle would be left to their own devices, on “Baby Driver” the strong collaboration with the director continued during production. According to Prescott, this was a big reason why the geometry and the physics of the action in “Baby Driver” feel so perfectly aligned.

“It’s Edgar’s massive attention to detail, to be really on point with what he’s doing with actors on main unit and how that affects what we do on second unit,” said Prescott. “If we go first and shoot a 180 in and 180 out of alley – like you see in the trailer – Edgar wants to know exactly what Ansel should be doing with the car at that point to initiate the stunt. He wants to know if he’s clutching kicking, or braking, or counter steering. Between that detail work and letting the action stand on it’s own, it’s what translates to this feeling of it being so believable and visceral.”

Wright also had Elgort and Jon Hamm train in the basics of stunt driving to make their on screen actions believable, in addition to having dance choreographer Ryan Heffington (Sia’s music video for “Chandelier”) work with the cast on their movements, both for action and non-action scenes.

Wright also had one of his longtime editors, Paul Machliss, on set to make sure the action still perfectly matched the music.

READ MORE: Why Action Scenes in Big-Budget Movies Have Become So Boring

“There’s not a b-shot or master to go to, most of the time that’s because with some of the choreography you [couldn’t do that],” said Wright. “You need to know you got [the shot], because there’s no back up.”

During the second car chase, set to the two-and-half minute song “Neat, Neat, Neat,” by The Damned, cinematographer Bill Pope and Machliss made it clear the timing of their shooting was longer than the track. Wright was determined not to cut action from the scene, nor break his plan of one song per action scene, so on the last day he shot an insert of Elgort panicking as the song ran out and rewinding the track so he could finish the getaway. While Wright was a slave to the songs, he wasn’t necessarily a slave to his storyboards. Prescott said he’s never worked with a director so clear about what he wanted, but so open to collaboration and letting the best idea rise to the top.

Wright’s underlying goal was to place the audience at the center of the action – the pacing, story and direction are one organic whole. Each bracing sequence is a natural culmination of dramatic tension and the elevation of character’s conflict into something that keeps the audience engaged.  Wright knows it’s a gift that he’s been able to write and shoot an original action film on Hollywood dime, but he refuses to accept it as some kind of anomaly.

This Article is related to: Toolkit and tagged Baby Driver, Edgar Wright