A crowd of hundreds, some in costume as Gotham City characters, gathered outside City Hall to honor the late actor. 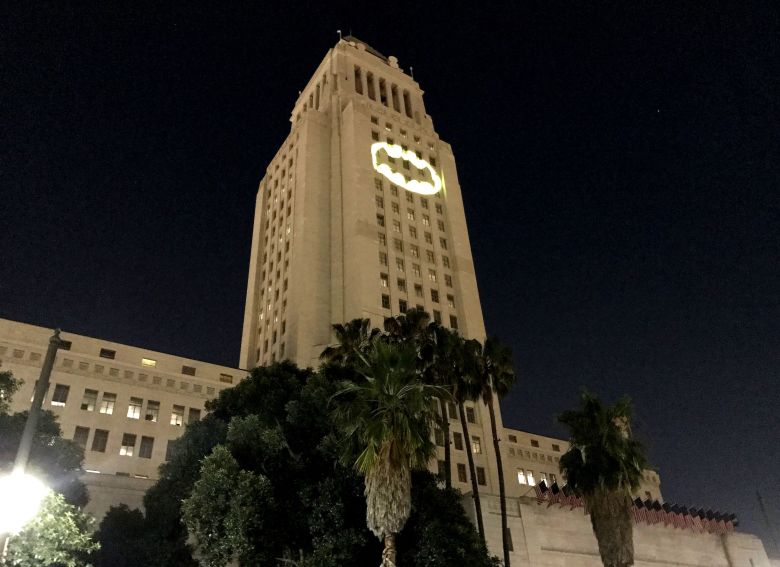 Hollywood honored Adam West in the best way it knew how on Thursday night: It lit up the bat-signal one more time for the fallen Caped Crusader.

READ MORE: Ben Affleck Pays Tribute to Adam West: ‘Thank You for Showing Us All How It’s Done’

At that point, Garcetti and Los Angeles Police Department Chief Charlie Beck lit up the bat-signal, which shone yellow and black against City Hall. Later, the words, “The City of Los Angeles Honors Adam West 1928-2017,” were projected underneath the bat-signal.

Although the event was honoring the late “Batman” actor, who had died last week at 88, this wasn’t a somber affair but more of a celebration of West’s legacy, sense of humor and spirit. Of the hundreds who gathered for the ceremony, many dressed in costume as either Batman himself or his Gotham City brethren, including the Riddler. Also, a bright red phone, like the one that Gotham City’s Commissioner Gordon would use to chat with Batman on the show was on display along with two of the retro shark-finned Batmobiles. The crowd even sang a rendition of the show’s theme song, complete with “nah-nah, nah-nah, nah-nah, nah-nah.”

“He loved humanity. He loved his fans,” Ward said.

Check out a video of the ceremony below, along with a few pictures of the event:

We gather tonight to pay our respects to the original caped crusader, our beloved Adam West. #BrightKnight pic.twitter.com/ocW6aeXIgV The city of LA just added a message under the #batsignal shining on city hall. #RIPAdamWest @NBCLA pic.twitter.com/bssvl3y0f3

This Article is related to: Television and tagged Adam West, Batman, Los Angeles