Season 3 Episode 10, "Lantern" shows us that a slow burn can still have a major impact. 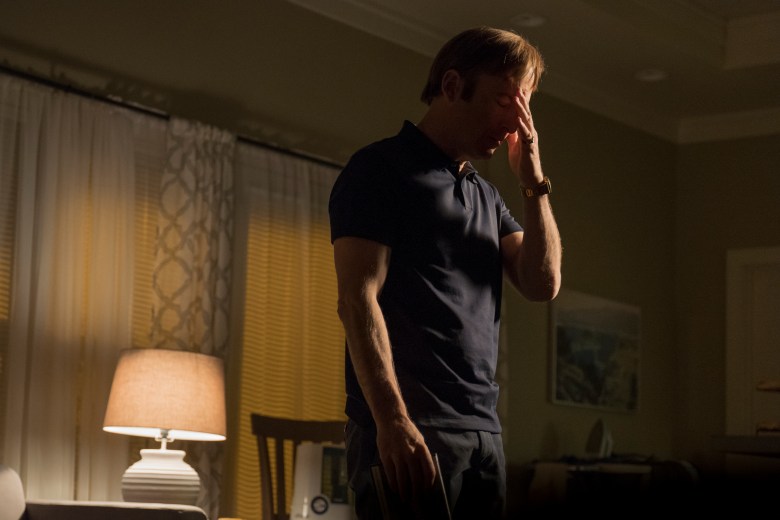 It’s not always easy to tell how bad an accident is upon first glance, so for the past week we’ve been waiting to find out just how badly Kim was hurt following the crash at the end of “Fall.” Almost right away, we get our answer — beyond the car, Kim’s down one arm. “This one handed crap is going to get real old real fast,” she muses. The real blow appears to be to her spirit, but at least she’s committing to her recovery in the short term. (A movie binge can cure an awful lot of ills.)

While Kim might be injured, it’s Jimmy who’s truly shaken up by the accident. Blaming himself for the fact that Kim was pushing herself too hard, Jimmy resolves to take care of her and make good. His first major act is to surrender the office in which he once took such pride, greatly simplifying his life and Kim’s — then, he tries to make amends with Chuck, which leads to a heartbreaking scene where Chuck basically dismisses him from his life.

Lest you feel too much pity for Jimmy, he next tries to make things better for Irene, the sweet old woman from last week who he manipulated into accepting the Sandpiper settlement by turning her into a social pariah. Re-corking that genie proves pretty much impossible without desperate measures: In order to fix what he did, Jimmy has to expose his scheme in front of Irene’s entire retirement home community, sacrificing his Sandpiper payday and ruining any chance he had of resuming his elder law practice when he gets his license back.

It’s a rough break for Jimmy. But he’s having a much better day than others. Blockbuster Video. Need we say more? For the record, here is a list of all the DVDs we saw on display in the New Releases section: “A Knight’s Tale,” the 40th anniversary edition of “Lawrence of Arabia,” the Philip Seymour Hoffman drama “Love Liza,” horror flick “The Mothman Prophecy,” and the Adam Sandler/Paul Thomas Anderson collaboration “Punch-Drunk Love.”

For the record, there may be some DVDs visible on the shelves that are not 100 percent period accurate — for example, Tim Burton’s “Big Fish” might have been present, a film which did not come out on DVD until April 2004. But if that’s the case, it’s a rare slip-up for a show that otherwise knows its period details. Seriously, a video store. Our early-2000s nostalgia is real.

Kim and Jimmy’s quiet conversation over “To Kill a Mockingbird,” invoking her childhood idealism for the law as practiced by Atticus Finch, offered more insight into Kim’s youth than we’ve gotten in quite some time. Maybe this is an indication that when she’s fully recovered, she’ll reapproach her own practice of the law? One can only hope.

“After… everything, I don’t give a shit about the office.”
— Jimmy

Jimmy and Kim’s post-accident discussion in the kitchen is the show at its most adult and pure — two grown-ups taking responsibility for their actions. It also contains the above line, which is basically the closest we’ve ever gotten to Jimmy telling Kim “I love you.” In that moment, the connection between Rhea Seehorn and Bob Odenkirk had more real passion than a hundred soap opera love scenes. It’s the moment we’ve been waiting for since our first glimpse of Mark Margolis in the “Saul” timeline — the cardiac event that eventually incapacitated the all-powerful Don Hector Salamanca. “Breaking Bad” fans never knew how, exactly, Hector ended up paralyzed in a wheelchair, but now we have the answer, thanks to Nacho’s patience with the long game. (If you want to know exactly how Nacho pulled this off, this Reddit thread has a pretty coherent breakdown of why Nacho swapping Hector’s medication for ibuprofen was effective.)

Nacho, of course, isn’t a player in the “Breaking Bad” era, so there’s still plenty of reason to be concerned about him. Especially considering…

In the finale, it’s not so much about keeping our eye on Gus as who Gus is keeping his eyes on. That of course, would be Nacho, who seemed to get away with his pill-swapping scheme. But Gus is clearly suspicious and, more importantly, now has Mike on his payroll. Mike’s kept bigger secrets, but right now who knows exactly what is unclear.

What’s Up With Mike?

No clue — Jonathan Banks did not make an appearance this episode. Which makes sense for storytelling purposes, but it’s time to revive a complaint from last year’s Emmys season. Since Season 2, the more visible supporting actor contender has clearly been Michael McKean, who has gone un-nominated since the show’s beginnings. McKean getting overlooked was a shame last year — if it happens again this year, it’ll be a crime.

Every time it seems like the relationship between Jimmy and Chuck can’t get worse, we reach a new level. In this case, their final scene together goes beyond love and beyond hate: Chuck dismisses Jimmy with utter indifference. It’s something which clearly ends up tearing at Jimmy inside, but he accepts it, letting Chuck have the last word as he slinks away.

It’d be easy to believe that Chuck genuinely means everything he says to Jimmy — except that something about this encounter was clearly triggering, and within the next 24 hours Chuck completely backslides into his old patterns. And then things got even worse.

“Better Call Saul” is all about the details, especially when it comes to episode titles. Nearly every week, in fact, attentive viewers will experience a moment of realization when it becomes clear why that episode got its name: A moment of dialogue, such as Episode 303, “Sunk Costs,” or a physical action, such as Episode 308, “Slip.”

These moments are never extremely subtle, instead often landing like a physical blow. But we maybe thought we understood why the season finale was called “Lantern” following the cold open, which gave us a bittersweet flashback to the brothers McGill, bonding over childhood favorite “The Adventures of Mabel.” But then we reached the ending, and the brutal final moments which awaited us.

The slow rise of the flames is a moment that is truly, definitively “Saul” at its best — quiet, yet horrific, and oh so grounded and real. Any long-time television fan knows that no one’s truly dead until you see the body. But as we prepare for the long wait for Season 4, we do so knowing that this time, the damage may truly be done. And it just speaks to the brilliance of the series, which keeps us hooked, tragedy after tragedy.