Three working-class women of color run private investigations out of the back of a bodega in the latest series from creator Hye Yun Park. 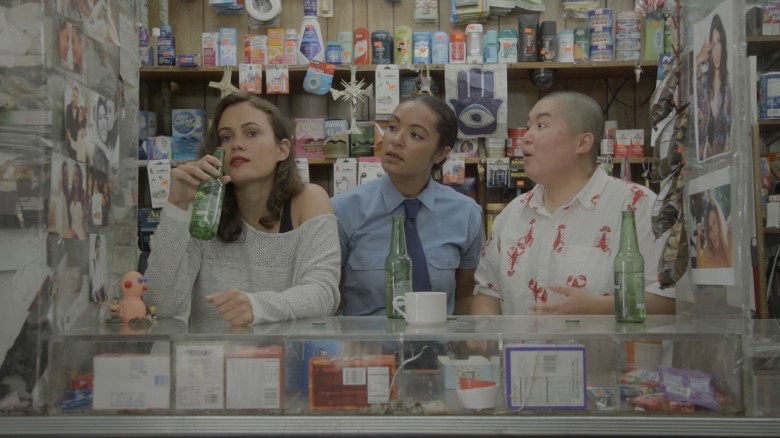 For those feeling conflicted by both mourning the loss of “Bored to Death” while tiring of neurotic male protagonists, your dream series has arrived. The amateur Brooklyn detective comedy gets a radical spin in “BKPI,” a delightfully wacky new short form series from writer/director Hye Yun Park. The series, which is produced by Super Deluxe, is in the middle of a triple-header festival run, playing LA Film Festival, Outfest, and Frameline all in the span of a few weeks.

READ MORE: ‘Will & Grace’ On Speed: Gotham-Nominated Web Series ‘The Gay and Wondrous Life of Caleb Gallo’ Is A Surreal Ride

The series stars Park, Dina Shihabi (“Madam Secretary”), and Celine Justice as three badass, working-class women of color who start a private investigation firm to solve minor crimes affecting their Brooklyn neighborhood. But this isn’t some tired parody of hipster Brooklyn filled with beards and skinny jeans; the world of “BKPI” looks much more like the actual Brooklyn than anything you’ll see on television currently.

“I could not bare to watch another white-washed portrayal of Brooklyn where wealthy millennial hipsters hash out their lives, while working class people witnessing the gentrification of the borough are sidelined to store keepers with funny accents,” said Park. “I wanted to shatter that misrepresentation and have 3 strong, independent women of color stomp around Brooklyn, giving no fucks and claiming their powers.”

Mission accomplished. The experience of watching “BKPI” is akin to that of watching “Wonder Woman,” albeit on a much smaller scale. It is utterly thrilling to see a group of strong women kicking ass and getting shit done, all while cracking jokes and taking care of their neighbors and each other. Park is an energetic and charismatic ringleader, rocking a shaved head and cracking dirty jokes. It’s refreshing, but also a bit disorienting (in a good way) to realize just how rare images like this are.

READ MORE: LGBT Superheroes: Why ‘Wonder Woman’ Could Never Have Been The Lesbian Avenger We Still Need

Park is no stranger to the short form series, having produced two seasons of the wryly self-mocking “Hey Yun,” a play on her name. She also had a viral hit with “First Kiss NYC,” where she invited total strangers to kiss on camera. The sweetly mesmerizing short reveals so much about human vulnerability, and the imaginary barriers we put between ourselves and others. It clearly struck a chord: It’s been viewed nearly 8 million times on YouTube and was picked up by Jill Soloway’s Wifey TV.

The cast and crew of “BKPI” were 95% women, many of whom were queer and trans women of color. “It was the first time I experienced a synergy from having the humans behind the camera reflect the humans on camera,” said Park.

Check out this short exclusive clip for a taste of “BKPI”:

“BKPI” plays Outfest in Los Angeles on July 7. It is produced by Super Deluxe.

This Article is related to: Television and tagged Outfest, Super Deluxe, Web Series