Many questions still remain about Comey's dealings with President Trump, but one thing is certain: The former FBI director's testimony was riddled with clues to his temperament. 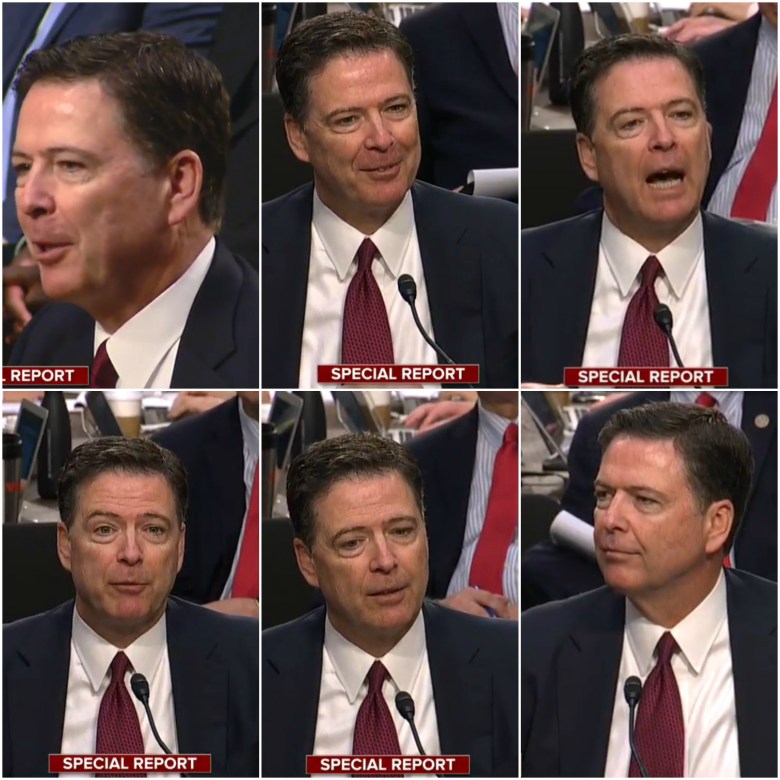 James Comey’s testimony before Congress may reflect a dark chapter in American politics, but it also created some of the most riveting live television in history — and, at just under three hours, a gripping feature-length window into the anxieties of our troubled times. While the biggest questions remain unresolved — has President Trump colluded with Russians? obstructed justice? — it created a fascinating spectacle of the highest order.

Moments before testimony began, pundits already discussed the broadcast in movie terms. More than one journalist compared Comey’s appearance to “Mr. Smith Goes to Washington” — a private citizen standing before the government, ostensibly taking the moral high ground. However, that comparison failed to convey Comey’s paradoxical nature. Last fall, he emerged from the 2016 presidential election reviled on both sides of the aisle, with his role in the Hillary Clinton email scandal leaving Democrats reeling. However, by the time he was unceremoniously dismissed last month, he looked like one of the last sane figures on the Hill.

Sitting at a microphone under bright lights as millions looked on, Comey became the emblem of a terribly divisive period in American society. And it all came down to his face.

Sure, the true substance of Comey’s testimony emerged from the initial statement he released the day before, along with his alternately confident, strained, and cordial exchanges with a range of senators. His particular manner of speaking, a blend of mechanical summaries and unique colloquialisms (the world will never forget “no fuzz,” “lordy,” and “meddlesome priest”) made the Comey testimony an extraordinary visual affair, one in which the 56-year-old intelligence veteran’s sunken eyes and shifting expressions told a complex story of embattled egos, frustrations, and betrayals that words could never convey alone. Here’s a rundown of the key images that defined this unforgettable media event.

Interrogation sessions are a natural setting for the filmmaking process, since the drama emerges from a simple combination of closeups and editing. Emile de Antonio’s masterful 1963 documentary “Point of Order” mines suspense out of archival footage from the Army-McCarthy hearings, chronicling the waning days of the Red Scare in its own language. The intensity of the Comey hearings emerged in similar terms.

The cameras rarely left Comey throughout the broadcast. On CBS, there were three angles; a fourth would occasionally show his interrogators without him, but those shots would usually only last a few seconds before returning to Comey. The approach was as calculated as the shifting perspectives of a sports broadcast, manipulated to play up the tension. As a result, we’re usually watching Comey speak or listen to questions. The tools of cinematic storytelling — the placement of angles, Comey’s performance, and the editing choices made throughout — reveal the minutiae of how this narrative unfolded in real time.

Comey tends to hide his feelings from the cameras, much in the same way that he claims to have remained emotionless when the president asked him for loyalty in a contentious private dinner. As an intelligence official, he has been trained to restrain himself for briefing sessions in order to avoid letting his own opinions sway government officials.

But there are key moments when this hardened resolve shows its seams, as when Comey finished up his initial remarks. After explaining his consternation with the Trump administration, Comey addressed the FBI staff he had managed since 2013. The former director, who learned about his firing during a trip to Los Angeles, showed his passion for his team. “I am so sorry that I didn’t get the chance to say goodbye to you properly,” he said. “It was the honor of my life to serve beside, to be part of the FBI family, and I will miss it for the rest of my life.”

His eyebrows rise an inch and his eyes widen just enough to show hints of welling up, and if indeed the director was moved to tears, his words support that outcome. It was a moment of immense sadness, providing a window into the regrets and disappointments at the root of this affair.

“I Love Spending Time With My Wife”

The questioning session led Comey off script and occasionally caught him by surprise. While he didn’t dig into his personal life, one can easily imagine the strain the last few months have caused Comey and his family. He seemed eager to acknowledge his family when recalling how the president — during their initial private dinner — changed plans from one that would have included Comey’s wife. “I love spending time with my wife,” Comey said, unleashing a sheepish grin that shows hints of warmth he otherwise suppresses throughout the hearing.

Comey also talked about fears stemming from the media camping out at his home, revealing his decision to indirectly leak his memo about his interactions with Trump rather than handing it out to the press, comparing it to “feeding seagulls at the beach.” The line prompted audible laughter, a collective acknowledgement of some deeper truth beyond the cold analysis. The last year has been rough on a lot of people, and Comey’s ability to toss a vivid metaphor into the mix with only the hint of a smile was a moment of fleeting catharsis.

The sheer absurdity of this situation seemed almost unthinkable a year ago: An experienced FBI director facing down a cartoonish billionaire villain about the judicial investigations sounds like fodder for an airport novel, not the natural state of things. Comey may have been as shocked by Trump’s disregard for traditional boundaries as anyone, uncertain and perhaps even a little scared by the president’s undisciplined behavior. Recalling a phone conversation with Trump in which he reportedly asked Comey to end the investigation of former National Security Advisor Michael Flynn, Comey admitted that his response (that he “would see what we could do”) was “slightly cowardly.”

It’s an obvious strain on the confidant, even-minded Comey to admit his flawed behavior, especially in the midst of such a thorny situation in which he believes he took the moral high ground. But he has no choice in this moment, pressed by Senator Dianne Feinstein about his decision, and the admission leads to a tinge of melancholy on his face. His eyes turn downward, presumably toward the floor, and his gaze grows distant. It may ultimately turn out to be one of his strongest moments for viewers studying the exchange, because it reveals this monolithic, beleaguered figure as a flawed human just like anyone else.

Page 1 of 2
Continue Reading: James Comey Testimony: The 6 Images That Made It the Best TV Movie of the Summer

This Article is related to: Film and tagged Donald Trump, James Comey