Hollywood's burgeoning presence in Cuba is in trouble if the Trump administration reinstates economic sanctions. 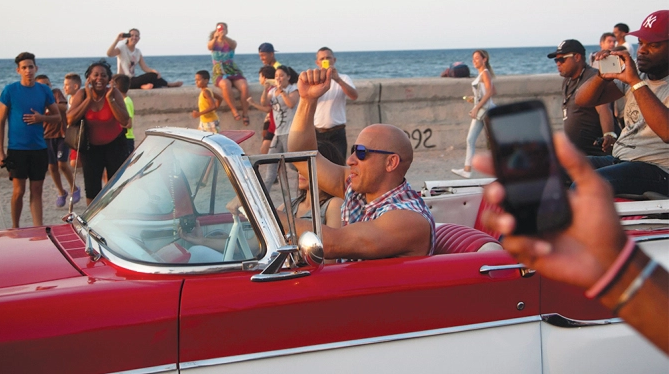 A car chase scene in “The Fate of the Furious” made ample use of Cuba’s gorgeous vintage cars.

Universal Pictures’ “The Fate of the Furious” was one of the first major studio movies to shoot in Cuba since Barack Obama eased long-held economic sanctions on the country — and it just might be the last if Donald Trump brings back the boycott.

Hollywood producers scrambled to take advantage of Cuba’s picture-perfect landscape, architecture, and vintage cars after travel restrictions were lifted. “You could basically just throw your camera up in the air and it’ll land on a perfect shot,” F. Gary Gray told Variety, who directed “The Fate of the Furious.”

While Gray said there were numerous hassles to production, including very little internet access and not enough hotel rooms, the experience was all worth it in the end. Despite barriers, producers were prepared to meet the challenges of a burgeoning Hollywood presence in Cuba, but that is all on hold as the country awaits news of a potential policy shift from Trump.

READ MORE: ‘The Fate of the Furious’ Review: Vin Diesel’s Family Becomes Dysfunctional in Worst ‘Fast and Furious’ Ever

“We will have to wait and see what happens with the Trump administration,” said Cubam producer and lawyer Lilianne Rodriguez on a panel at the Produced By Conference titled “The Whole World Is Watching: Producing For A Global Audience.” “I don’t know if [the Cuban government] has a contingency plan for the film industry…I hope they have a contingency plan for the country.”

This Article is related to: Film and tagged F. Gary Gray, The Fate of The Furious