In the latest "Despicable Me" sequel, Gru gets a twin (also voiced by Steve Carell) to help battle a mid-life crisis and the evil Bratt (voiced by Trey Parker). 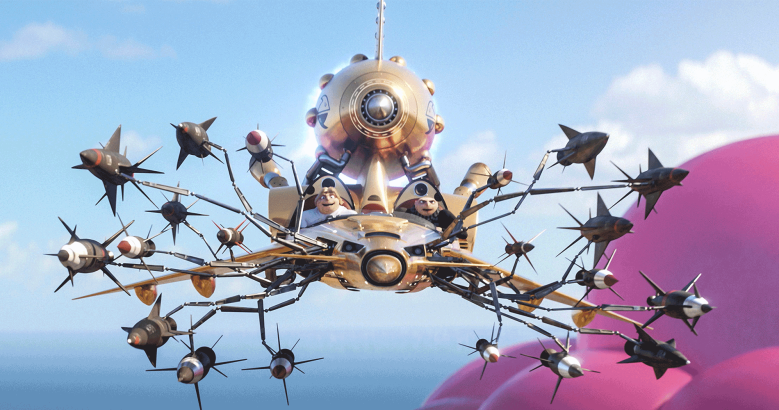 The continuing challenge for Illumination’s popular “Despicable Me” franchise is what to do with Steve Carell’s Gru now that he’s no longer a supervillain. The solution in “Despicable Me 3”: Gru experiences a mid-life crisis and flirts with being bad when he meets his long-lost twin brother, Dru (also voiced by Steve Carell), a flamboyant opposite in every way.

For Illumination, it was an opportunity to draw more out of Gru through Dru in a yin-and-yang way. This allows Gru to get his mojo back by teaming up with Dru to steal back the world’s most expensive diamond from the young supervillain who cost him his job: Balthazar Bratt, a failed child star from the ’80s who never got over the cancellation of his show (voiced by “South Park” co-creator Trey Parker).

Finding the Right Dru for Gru

Designer Eric Guillon made a drawing early on of the long-haired, blond Dru dressed in white in sharp contrast to Gru’s black. It was very much patterned after the Mad magazine comic strip, “Spy vs. Spy.” But then Guillon went away from that by putting Dru in a lavish fur coat with a sweat shirt underneath. This wouldn’t do, so they came back to the all-white look.

“He was the polar opposite of Gru,” said Kyle Balda, who shared directing duties with Pierre Coffin at Illumination Mac Guff in Paris (with Guillon helping as co-director). “Whereas Gru hunches over like a curmudgeon, Dru stands up right. He’s more open to the world. Everything about Gru’s posturing is protection and defense. He’s more like a dark cloud and Dru’s a sunshiny guy.”

The Back and Forth of Carell’s Voice Sessions

To find the right voice for Dru, Carell experimented with different jubilant styles, going higher or lower in volume and intensity. At the end of the first couple of sessions, editor Claire Dodgson compiled different Dru voices together to compare. Carell then landed on the one that projected a naive sense of the world.

“He would mainly do all of the Gru and Dru scenes separately because it was technically challenging to play off of one another in the same scenes,” said Balda, whose emphasis was story, staging, layout, and editorial.

Added Balda: “But he would read himself into the scene with the last line or phrase to help launch himself into the next character, even though he wasn’t doing a full session of going back and forth.”

How Bratt Came Between Gru and Dru

Bratt actually started out as a henchman to a large, humorless supervillain. But when looking at the sketches, Bratt stood out graphically and with more potential as an arrested adolescent of the ’80s with a nefarious plan for destroying Hollywood based on one of his episodes.

“The story opened up and we built him around the ’80s,” said Balda. “Eric designed weapons like the guitar. And then when Trey Parker came on, he just tuned in right away to who that character’s voice should be. And we discovered that he could also sing and quite well, actually. He brought all those Michael Jackson textures to his voice and tongue-in-cheek ’80s humor, like the line, ‘Son of a Beta Max.'”

There was also an athleticism to Bratt’s heists, emphasized by break dancing, and so the camera work had an appropriate music video vibe from the era with lots of quick zooms. “We found staging and camera challenging during the act three action sequence,” Balda said. “We’ve never had a sequence with such scope.”

Keeping the Focus on Gru and Dru

They juggled different subplots and moments of jeopardy, plus the Minions entered the fray. But the focus remained on Gru and Dru working together to take down Bratt. In particular, Illumination’s Mac Guff looked for interesting ways to use the camera to make them look superior or inferior during various highs and lows.

Photo Credit: Illumination and U

It was quite a dance. And the relationship between Gru and Dru constantly shifted. It began with fascination and then developed into a sibling rivalry until settling into a mentor/protege relationship.

As always, it’s about allowing Gru be Gru without destroying his life.

This Article is related to: Film and tagged Animation, Despicable Me 3, Steve Carell, Trey Parker