Series co-creator Samm Hodges explains why, like, Martin is a little bit neurotic and speaks, you know, like a surfer. 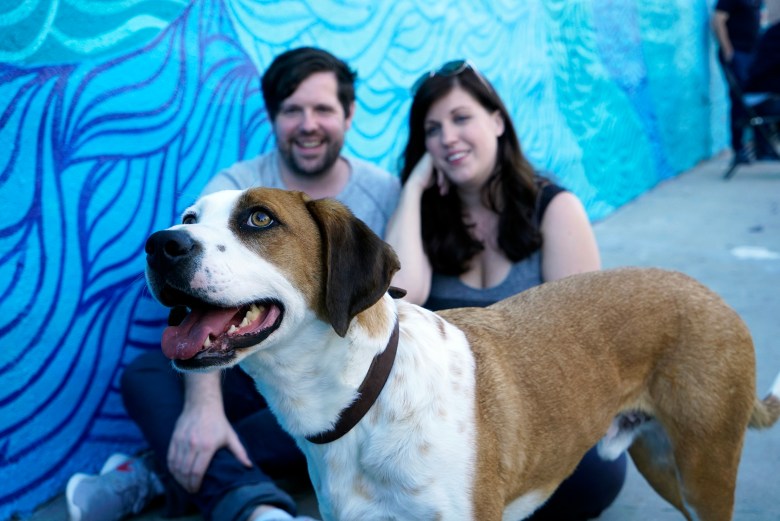 Martin, the breakout star of ABC’s comedy “Downward Dog,” is a really chatty mutt, but the man who provides the voice of Martin the has gone through a lifelong journey to find his own voice. After overcoming a severe speech impediment that started in childhood, Samm Hodges is using that same heartache and experience to shape one of the most insightful and compelling narrators on network TV.

Hodges started stuttering around age seven, about the time when his mother died. The speech disorder only worsened to the point where Hodges even considered suicide.

READ MORE: ‘Downward Dog’ Creator Shares His Diary on How This Unlikely Show Every Got Made

“I lost my mother at a young age, and the family kind of just fell apart for a while,” Hodges said in an interview with IndieWire. “My dad moved us out to the woods, and I kind of lived in the 18th century. We didn’t have a shower. I had to haul water from a well to bathe myself in middle school. That’s not cool. So I went through a lot of painful things in my childhood. But the stutter, by far, was the hardest thing I went through because … I feel like it completely defined me.”

Despite Hodges’ distress, he was determined that his stutter wouldn’t get in his way. He read pages and pages aloud to himself in his room, memorized all of his arguments when it came to playing a lawyer in a mock trial, played with a band onstage that allowed him to perform though a persona, and started writing as a way to express himself more eloquently than he could while speaking.

He has also learned to work around words that were trickier to pronounce.

“Well, I think what you’re trying to do is you’re trying to trick your brain into thinking you don’t have a stutter, right?” he said. “When I’m talking…I’m thinking a sentence or two out of what I’m about to say. My brain will take a red highlighter and say, ‘You can’t say this, this, this, or this word.’ And so then what I’ll do is try to find synonyms. Like right there, I wanted to find a word that wasn’t ‘synonyms’ because I couldn’t say it quite smoothly. But I just chose to say it because we’re talking about this. But then also that’s why my words are very slurred. That’s why I always say certain verbal tics and whatnot as well, just as a way to try to get through it.”

Those verbal tics may include using filler words such as “like” and “you know” to create continuity in Hodges’ speech instead of reaching a verbal obstacle and stopping. These words also crop up a lot in Martin’s speech on the show, which may make him come off as a surfer dude. Listen for these words in a clip from the show’s fourth episode below:

Brains and brawn. Can he have it all? #DownwardDog pic.twitter.com/bzlC7gp7G2

“There’s all kinds of words to try to fill in the sentence to kind of keep the rhythm going, so I don’t stop,” Hodges said. “So that kind of came up more when I was recording the dog than I even do usually…[Martin is] definitely a character. He’s much more of a valley girl in some ways than me.”

I know saying “like” was a technique to work through the stutter. Every time I hear Marin say “like” I hear a badge of courage. #DownwardDog https://t.co/UPxcHViHHQ

Hodges never intended to be the voice of Martin. Before “Downward Dog” came to ABC, it was a web series that Hodges had written. Because of the indie nature of the project, he also laid down what he thought would be a temp voiceover track for the dog, but co-creator Michael Killen used it as the final track, and it stuck from there. Star Allison Tolman (“Fargo”) fell in love with the voice that she had heard on the web series and was determined to have the same actor perform it for broadcast. Despite having the gig in the bag, Hodges still struggled from one recording session to the next and would stress out the day before doing his lines. The emotional importance of the finale created such difficulties that Hodges had to scrap everything that he had recorded previously that was done laboriously, almost one word at a time, and then re-record the whole thing.

Nan and the Narcissist

Beyond the “likes” and “you knows,” Martin has a uniquely un-doglike persona. The show isn’t so much about the wonders of a talking dog but more about Martin’s conversation topic of choice: himself.

At the beginning of the fourth episode, Martin says, “There’s no easy way to say this but a lot of dogs are just really, really, they’re just stupid. And that’s fine. It’s not wrong to be stupid, but sometimes I think that stupidity is almost celebrated. Sometimes dog culture seems to be a breeding ground of anti-intellectualism. I just want to say, like, it’s not a sin to be smart.”

Page 1 of 2
Continue Reading: ‘Downward Dog’: How Overcoming a Speech Impediment Inspired the Voice of TV’s Most Compelling Canine

This Article is related to: Television and tagged ABC, Downward Dog