Among those under consideration are the VFX behind exploding kitchens, faceless boogeymen, and that Salvador Dali-like spider. 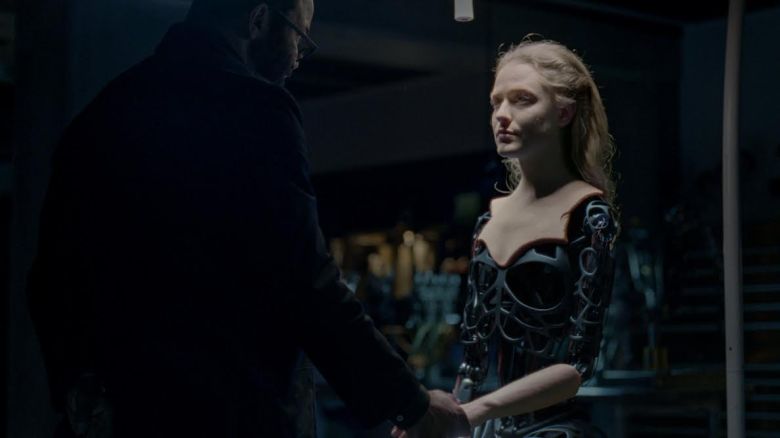 Without “Game of Thrones” in Emmy contention, the VFX race has become wide open, with “Stranger Things,” “Legion,” “Westworld,” “American Gods,” and “Black Mirror” stepping up with creepy characters and supernatural situations.

Highlights include the Demogorgon creature from “Stranger Things,” the exploding kitchen from “Legion,” the final reveal of Dolores (Evan Rachel Wood) and all of her inner workings from “Westworld,” the incredible sex scene from “American Gods” with Bilquis, the Queen of Sheeba (Yetide Badaki), and the disgusting spider with a human head from the “Playtest” episode of “Black Mirror.”

Meet the Demogorgon from “Stranger Things”

The cool thing about the Demogorgon from “Stranger Things” (directed by the Duffer Brothers) is it fits so well with the ’80s low-tech vibe. As the boogeyman from the Upside Down (named from “Dungeons & Dragons”), the creature represents a wonderful hybrid of practical and CG.

Aaron Sims Creative did the design, and the suit was built by Spectural Motion with an animatronic head. The VFX team led by supervisor Marc Kolbe realized early on that quick turnaround meant they needed a CG model to enhance and augment the suit and head. So they went back to Aaron Sims to build a CG model based on the the performance work of the guy in the suit, Mark Steger.

The Duffers wanted a unique look — a monster with no face — and Sims came up with a flower petal-like design. The inspiration came from a snapping turtle.

In practice, they wanted a recognizable silhouette and an unforgettable demon, but required great flexibility between the suit and CG model. “For instance, when the creature comes out of the ceiling, that was CG,” said Kolbe. “But then they transitioned to [Steger] in the suit after he drops to the ground and stands up.”

Making the Kitchen Explode in ‘Legion’

In Noah Hawley’s brilliant psychological deconstruction of a Marvel superhero, David Haller (Dan Stevens) has no idea that he possesses mutant superpowers. He thinks he’s a schizophrenic. Thus, when he inadvertently makes the psychiatric hospital’s kitchen explode through telekinesis, it’s total chaos.

To pull off the bravura sequence from the pilot, the VFX team went mostly practical. They used air cannons to blow up all of the objects in the kitchen cabinets and drawers, (lots of spaghetti, Pringles, and knives) and shot it in slow-mo at 1,000 fps using a Panaflex camera and a motion-control Bolt rig.

The Bolt operator had to capture it within a thousandth of a second, and they only had one take to get it right for each angle. So they had no idea what it would look like.

“In the end, it had to be this active prep to get these things ready — a very dangerous situation — with these 65 cannons that could tear you apart,” said VFX supervisor John Ross. “And we had to get the timing just right. Because we noticed in our tests that if we missed the timing, we couldn’t see a thing… the camera went too fast and the drawers wouldn’t be open yet or we’d miss it.” Opening Up Dolores from “Westworld”

In the re-imagined, futuristic, adult theme park from Jonathan Nolan and Lisa Joy, humanity is brutal and the robots are benevolent. Our empathy for the robotic hosts grows throughout the season; when we glimpse the inner workings of the conflicted Dolores in “The Bicameral Mind,” it makes no difference that she looks like a machine.

The animation was done by Important Looking Pirates. The actress was shot on a stretcher wearing a blue suit; animators replaced her body as well as parts of the stretcher. Careful modeling and rigging of all the parts allowed them to function and move correctly.

Also, apart from building and animating Dolores’ mechanical body, Important Looking Pirates also created her skin from the neck down. However, the first shot in the sequence has a practical skin prop, while the skin flap for the other shots was done in CG.

“The design of the full Dolores body when she comes to life at the end was about trying to find something unique and visually interesting that felt real and grounded but had an elegance to it,” said production VFX supervisor Jay Worth. The Devouring Bilquis from “American Gods”

While “American Gods” contains a bloody fight in the rain with faceless pixelated characters shot at different frame rates, and a giant White Buffalo, the most impressive moment occurs when Bilquis (Yetide Badaki), devours her sex partner. She must do this in order to retain her youth, beauty, and strength.

VFX supervisor Kevin Tod Haug thought hard about how to handle it in a way that “wasn’t egregiously anatomical or just stupid.” So, he took great pains to manage how representational they would be. “You’re looking right at it, but never really quite see it,” he said.

They played with perspective, and made a digital environment along with a digital version of Bilquis, wrapping textures around her to make her look larger. “The other character’s interaction with her was complicated, so he needed extra manipulation,” said Haug. dIt all had to look dynamically photo-real, as though the camera had been there. In “Playtest,”Cooper (Wyatt Russell) thinks he’s going to have fun beta testing a new VR game. Only the virtual scares in a spooky castle become all too horrifyingly real. The best part is when he’s confronted with a creepy-looking spider with the head of a guy who used to bully him,

The tricky part for the VFX team (supervised by Justin Hutchinson-Chatburn) was not making it look silly. They were assisted by Framestore, which did the animation. “What we were looking at from the start was a Dali-esque, extremely long-legged spider,” said Chatburn. Whenever it was in frame or going out of frame, you feel caged by it.”

The spider also has a fragility that doesn’t quite make sense, like Salvador Dali’s long, spidery elephants. Initially, the design was too surreal and they pulled back. They looked at “The Relic” and fleshy surfaces, and ended up with a mashup between human and digital.

“It’s disgusting, particularly his torso, and we pushed the bone structure through the skin,” said Chatburn. But the spider’s never scary because Cooper’s merely grossed out.

This Article is related to: Awards and tagged Emmys, Legion, Stranger Things, Top of the Line, Westworld