Between "American Gods" and "GLOW," Betty Gilpin is an undeniable breakout of 2017 TV — but she doesn't feel that way. 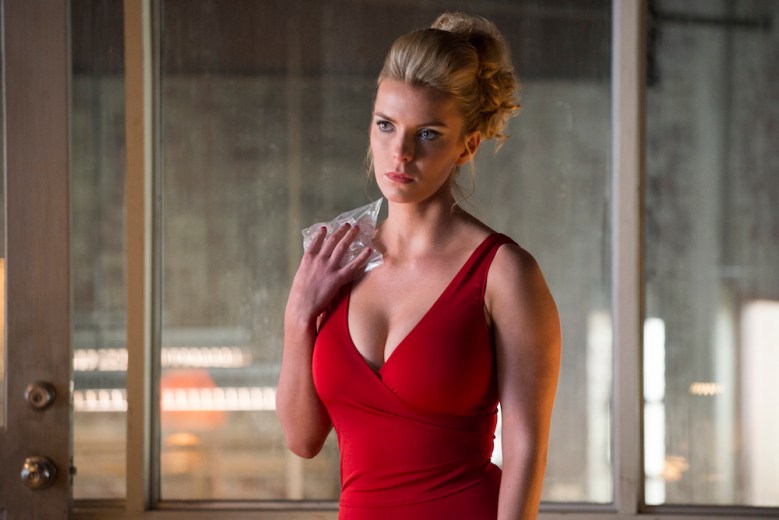 The term breakout is a tad misleading.

While implying that someone has broken free from the pack — a standout among standouts; that they’ve “made it” — there’s no guarantee of permanence. Many so-called breakouts have an expiration date on their spotlight, and plenty of these actors who’ve proven themselves in one way or another still fade away over time. Then they’re asked to do it all over again, sometimes for their entire career.

Betty Gilpin, the electrifying spark of both “American Gods” and “GLOW” in their debut seasons, is absolutely a summer breakout. She might even be a 2017 breakout, if buzz holds and fans continue to discover both shows (now available in full on Starz and Netflix, respectively). Her talent is undeniable and is being vouched for by big names all over the internet.

But she’s not feeling it yet.

“Absolutely not, no,” Gilpin said during a recent interview, when asked if she felt like she’d broken through.”I don’t!”

Considering the ever-shortening public attention span, the highly competitive nature of the business, and the patriarchal nature of Hollywood, can you blame her? Gilpin’s description of auditioning for certain roles because that’s all that’s out there is the kind of thing we’ve heard before, but keep expecting to go away as minority- and women-driven projects prove profitable. “I’ve been in this sort of strange sweet spot of making my living as an actor but not doing crazy big shows like this,” Gilpin said. “I’ve died on a lot of ‘Law & Orders,’ I’ve worked on ‘Nurse Jackie,’ but I’ve auditioned for a lot of what’s out there, which is like squinty cops in tight outfits who aren’t taking any shit in the first scene and in the second scene they’re naked and blowing the captain of the police force.”

Working actors don’t have the option to pick and choose their parts, and Gilpin had been living on that level long enough for it to affect how she views the profession. Despite working in the theater to “feed her passion” for acting, Gilpin saw the aforementioned auditions as a necessity.

“To get health insurance, you give up your dignity — that’s what I thought being an actor was,” Gilpin said. “So when ‘GLOW’ came along, I was shaking reading it because I hadn’t really allowed myself to dream of a show like this.” What’s more surprising than the stark reminder of what working actors go through on a day-to-day basis is that “GLOW” was a project Gilpin landed after she’d already booked “American Gods.” So after nabbing a juicy part on Bryan Fuller’s buzzy Starz series, Gilpin was still eager to travel to Los Angeles and audition with Alison Brie five days before her wedding.

“So I auditioned for ‘American Gods’  way before ‘GLOW,'” Gilpin said. “I auditioned for the main part of Laura [Moon]. Emily Browning is so amazing in that part [playing] this quiet, minimalist quality — this quiet power that’s like a laser — and I come in.. not like a quiet laser. I’m like Elaine Stritch everywhere. So they were like, ‘You could be the drunk friend.'”

And what an amazing drunk friend she makes. As Audrey, Gilpin all but steals Laura’s solo episode from Browning, turning a two-dimensional grieving widow and scorned wife into a woman with biting wit and incredible empathy. She does something similar in “GLOW,” as the two characters she fought so hard to play prove to have more in common than we’ll spoil here.

“Reading this and thinking I could be on something where I could use the full expression of myself as an actor, in a feminist and powerful way, especially in this crazy time, was an opportunity that I almost didn’t allow myself to fully take in,” Gilpin said.

It’s safe to say the world is glad she did. Now Hollywood needs to make sure Ms. Gilpin’s breakout never breaks down.

This Article is related to: Television and tagged Betty GIlpin, GLOW, Interviews, Netflix