While Bryan Fuller and Bruce Miller have their authors' permissions, these showrunners may not be much different from teenagers who learned to write using their heroes' story worlds. 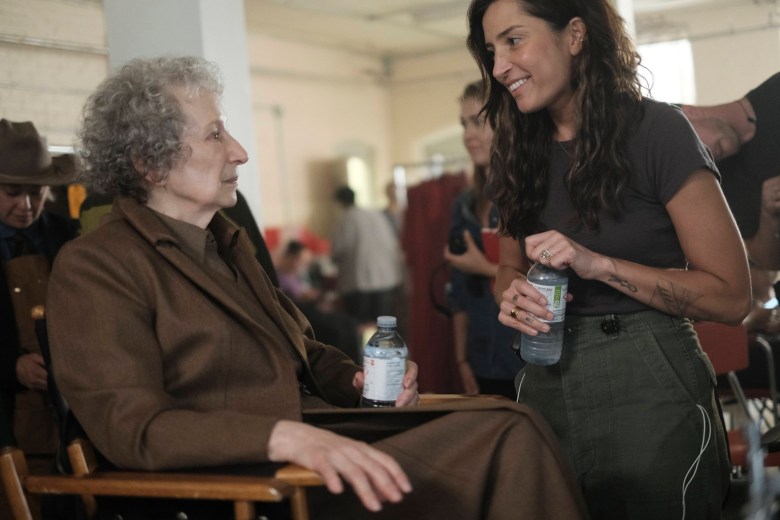 In a way, the showrunners behind “The Handmaid’s Tale” and “American Gods” have written fan fiction. Of course, there’s a big difference between those producers adapting their favorite novels for major studios — and, well, me as a teenager, staying up until 3 a.m. writing stories for some of my favorite characters and sharing them on the internet.

But this spring, hearing producers Bruce Miller, Bryan Fuller, and Michael Green passionately discuss how they gave their own spin to “The Handmaid’s Tale” (Miller) and “American Gods” (Fuller and Green), it felt awfully familiar. Their enthusiasm for not just translating those stories for the screen, but expanding those worlds beyond the scope of the original text, wasn’t that far removed from what fans have been doing for decades on a variety of different platforms.

The knee-jerk reaction might be that it’s only permissible to take someone else’s intellectual property and make it your own when you have the author’s permission. That’s understandable, but countless others disagree – and the line between creator, producer, and fan has become a bit blurry at times as a result.

That debate about authorship, the power of narrative, and how we engage with our favorite stories, made me want to be honest about my own past. For I’ve always been a bit embarrassed by my history with fan fiction, except for the fact that it made me who I am today as a writer, critic, and fan.

“The Handmaids Have Escaped Their Box” The handmaids take over SXSW.

“It feels wonderfully like a living document,” Miller said with glee about the process of adapting “The Handmaid’s Tale.” “As a reader of the book who, like most readers, is both thrilled and furious by the end of it, because there are so many things you don’t know, being able to follow your curiosity and flesh some of that stuff out is wonderful.”

The iconic dystopian tale, chronicling a world where women are trapped by a viciously patriarchal society, has been seen in multiple incarnations beyond the original novel, including a 1990 feature film, a ballet, and a recent special edition audiobook featuring new material written by author Margaret Atwood.

READ MORE: ‘The Handmaid’s Tale’: Why Episode 7 Took On a Different Point of View to Reveal ‘The Other Side’

Beyond that, as a lead-up to the show’s premiere, people dressed as Atwood’s Handmaids began appearing in the real world: The New York subways, SXSW, the Los Angeles Book Fair, the Austin state capital building. And that last one wasn’t viral marketing — it was political protest.

“The Handmaids have escaped from their box. They’ve gotten out of their package. They’re strolling all over the place,” Atwood said on the red carpet at the Los Angeles premiere. “They were in the Texas Legislature surrounded by men with guns. It could have been a still right out of [the show]. It was uncanny… They’re now an immediately recognizable symbol — they have been for a while, but I can’t control them now. They’re out of control.”

That attitude may be a part of why Atwood seems relatively calm about giving Miller’s adaptation her blessing, changes and expansions and all, even if it may become a definitive adaptation of this narrative.

One very notable shift that the show makes, something in direct conflict with authorial intent — in the book, the real name of Offred is withheld. While many readers believe the book contains a deliberate hint as to what it is, Atwood’s choice to keep Offred nameless was quite deliberate at the time, as she mentioned on Twitter last January:

Many reasons… so many people have been re-named over the centuries, their original names lost. That was my thought at the time. https://t.co/rHLFcqbzrr

The show, meanwhile, doesn’t just choose to name Offred. It makes the reveal — “my name is June” — the bold final note of the premiere. It’s just one of the ways the show has sought to bring this world to life, while also building a foundation that could last for years on the small screen.

“There’s a lot of her journey left,” Miller said about the decision to learn more about Offred beyond what the book reveals. For in writing the novel, Atwood gave the structure a curious quirk: The bulk of the story is told from Offred’s point of view, but after the ostensible ending there are the “Historical Notes,” packed with details about the rise and eventual fall of the nation of Gilead, as understood by historians 150 years beyond those events.

“We know something that happened to her [spoilers redacted],” Miller said, “and the next thing we know is 150 years later. I’d like to fill in those years. So if I get 150 years of the show, that’s what we’ll do.”

Miller and I had been talking for nearly 20 minutes in a Beverly Hills hotel room, and at that point in our interview, I felt comfortable enough to say this: “That feels like the ultimate form of fan fiction.”

He laughed. “Exactly. I’m exactly with you. Just, we’re better at it.”

Something about that reaction made me a bit sad. But to be fair, “fan fiction” is a loaded term — and it can mean a lot of different things.

What, exactly, does it mean?

Page 1 of 3
Continue Reading: For Shows Like ‘The Handmaid’s Tale’ And ‘American Gods,’ Literary Adaptations are the New Fan Fiction

This Article is related to: Television and tagged American Gods, Neil Gaiman, The Handmaid's Tale, The Walking Dead