The joke candidate ran on a platform of selling lasers, but had some refreshing ideas about Brexit negotiations. 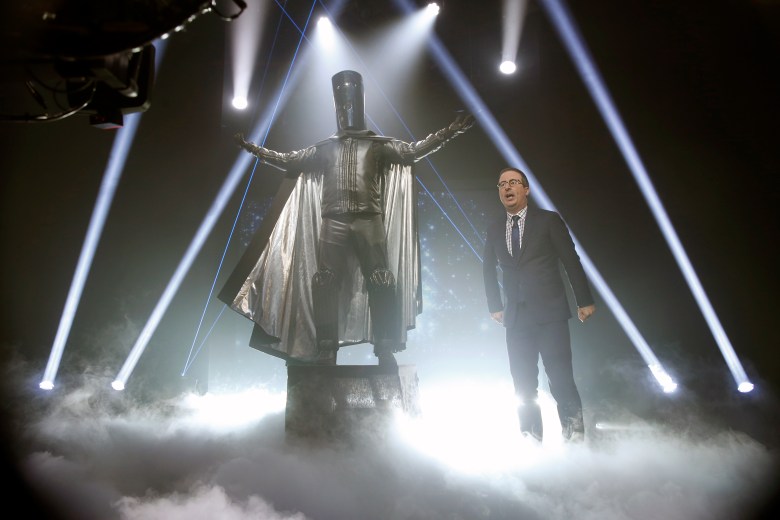 As British Prime Minister Theresa May struggles after losing the Conservative Party’s majority in last week’s election, John Oliver has thrown his support behind a rival candidate: Lord Bucket Head.

“British politics, when done well, can be very fun,” said Oliver on “Last Week Tonight.” Explaining to his mostly American audience Britain’s proud tradition of having all candidates stand together onstage as election results are announced, Oliver pointed out: “On election night, as her party was dealt a massive blow, the prime minister…had to stand onstage alongside Elmo…as well as Howling Laud Hope of the Monster Raving Loony Party.”

But the silliest of all was standing center stage wearing a distinctly-shaped head piece. That’s right, it’s Lord Bucket Head. “And for the record, Lord Bucket Head is this guy, an intergalactic space lord” who looks “like Darth Vader fucked an Amazon Ecco,” said Oliver.

Later in the segment, Oliver plays a clip of Lord Bucket Head at what one can only assume was a sparsely attended campaign event, speaking truth to power as fervently as could only be done from behind a rubber bucket mask. “It is not a great sign that the single most honest statement from any candidate in this election regarding the difficulty of the task ahead came from a man with a two foot bucket on his head,” said Oliver.

It’s worth a watch just to hear Lord Bucket Head speak. He really does sound a lot like Darth Vader.