"I kind of got what I wanted out of being an actor, and now I’m just as interested in helping somebody else have that." 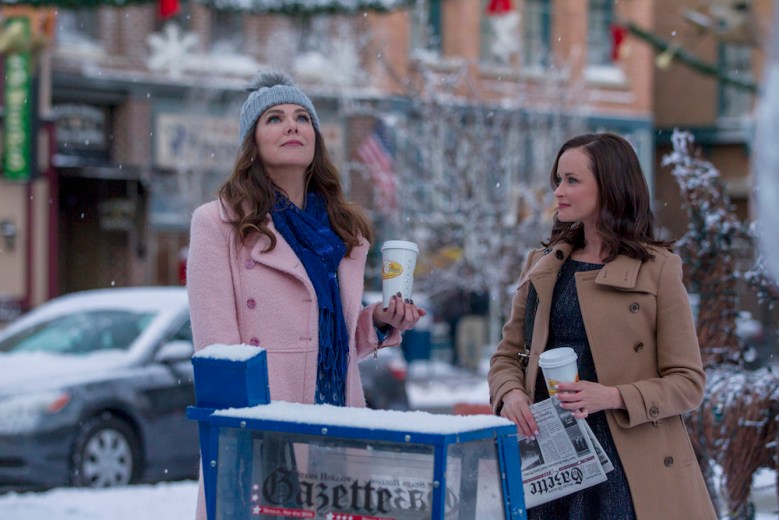 “A giant pretzel covered in mustard.”

For some people, those were the most emotionally loaded words spoken on any television show during the past year. They certainly were for Lauren Graham, who dropped that line of dialogue like she had been carrying it on her shoulders for the better part of two decades, waiting and waiting and waiting for someone to tell her where she was supposed to deliver it. When we met for coffee at Manhattan’s Crosby Street Hotel in May, it seemed as though the actress was just coming to grips with how good it felt to be free of that weight. “God, it just meant so much to me,” she exhaled.

No, that sentence doesn’t contain the mythical final four words that “Gilmore Girls” fans had lost hope of hearing after a contract dispute forced Amy Sherman-Palladino to leave her beloved series before its final season (although those four words definitely proved to be worth the wait). But that pungently unassuming remark, expressed during the last of the 90-minute revival episodes that premiered on Netflix in November, fed viewers something as satisfying to chew on as it was difficult to digest. Partially resolving the fundamental rift between Lorelai Gilmore and the mother who had always resented her perceived flippancy, it gave the show’s obsessive devotees something they had always begged for, but may never have actually wanted — something that Graham wanted, but had learned to live without. It gave them closure.

Closure is a tricky thing. It isn’t guaranteed, and it should never be taken for granted. Of course, that’s typically a lot truer of life than it is of fiction, but television — and the merciless industry that fuels it — has always had a funny way of leveling the playing field. Whereas most films are released into the world with a beginning, a middle, and an end, so many TV shows are only granted a beginning and a middle. In fact, some of them (even some of the best ones) are just afforded a beginning. For decades, this has been one of the most frustrating things about the medium.

And yet, in its own perverse way, this has also been one of its most fundamental charms. Shit happens. Things in life don’t always get sealed with a kiss and wrapped up with a bow. TV might be a magical place where it’s always sunny in Philadelphia and every season of “The Bachelorette” ends with a wedding, but there’s nothing more ruthlessly realistic than getting cancelled.

These days, of course, cancellation is no longer the terminal diagnosis that it used to be. Thanks to the rise of digital streaming platforms and the resurrections that Netflix, Hulu, and even some of their cable TV competitors have made possible for shows that were previously thought to be dead, the television industry — or whatever the hell you want to call it — has made it clear that a story isn’t necessarily over until there’s no one interested in watching more of it. Even after 25 years, beloved programs can still be exhumed; just turn on Showtime this summer and you’ll see that it is happening again. Now, the end is never the end. Now, people are always holding out hope for more. Viewers aren’t looking for closure, they’re looking for perpetual continuance. Not that she’s complaining. On the contrary, the series star was all smiles when we met. “Before we did the reunion, I was worried that I might miss having that question in the air,” she said. “What if I missed people coming up to me in the airport and saying, ‘When’s the movie?’”

Graham, who followed her initial stint as Lorelai Gilmore with a central role in NBC’s long-running “Parenthood,” wasn’t always so sure that she even wanted to return to the idyllic (and tragically fictional) Connecticut town of Stars Hollow. “When we finished the show, there was just so much around it,” she remembered. “Were we done? Was it the last episode? There was even some discussion of having Amy and Dan [Palladino] come back to ‘fix it,’ as it were, but I was ready to move on because I didn’t feel we had anything without our creators.” It wasn’t until she made her Broadway debut in “Guys and Dolls” that she started to have second thoughts. “There were young girls coming up to me who couldn’t have possibly watched the show when it aired — they were seeing it on DVD — and it was the first time I got that I was done, but other people weren’t done.”

Page 1 of 3
Continue Reading: Lauren Graham On Closure, Why ‘Gilmore Girls’ Got The Perfect Ending, and How She’s Writing The Next Chapter Of Her Life